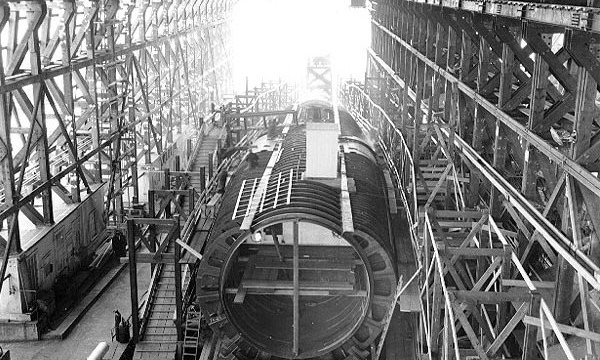 Technically, the Manufacturing Sector's In a Recession

Well, this is a fine way to begin the week.

“U.S. Equities Decline After Greek Talks With Creditors Collapse,” says Bloomberg in one of those irritating headlines that implies the market is tanking because of the mess in Greece without actually saying so.

At the risk of repeating ourselves, Greece will not leave the eurozone.

Our Jim Rickards said so in 2011, and he says so now. “The euro was never an economic project,” he reminded us in this space a month ago. “It was first and foremost a political project. Once the politics were understood, it was clear that the euro and its expanding membership were here to stay.”

Besides, what would happen if Greece left? It would inevitably move closer to Russia, not least thanks to a centuries-long bond of Orthodox Christianity. Western leaders won’t have that, says the estimable Marc Faber in the current Gloom Boom & Doom Report. Greece will stay in the EU “even if this means further meaningful and painful financial concessions by the EU (that is, writing off Greece’s debts).”

More worrisome this morning is an undeniable slowdown in U.S. manufacturing.

The Federal Reserve’s monthly index of industrial production slipped 0.2% in May… on top of a 0.5% decline in April. That’s weaker than the most pessimistic estimate among dozens of economists polled by Econoday.

The number has been negative four of the last six months… and the other two were flat. Technically, the manufacturing sector is now in a recession. On a chart, it looks like this… 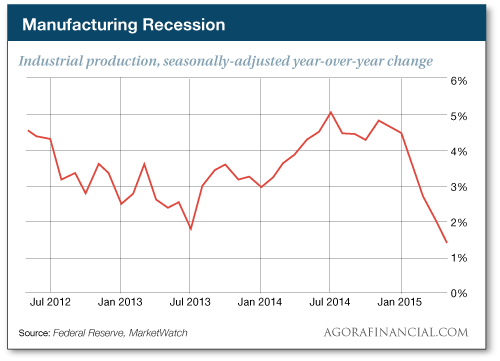 The industrial production number is made up of three components — manufacturing, mining and utilities. Only utilities were in positive territory, and only barely. Within the manufacturing component, the only meaningful sign of life is auto sales — juiced by that subprime zero-down 84-month financing we mentioned a few days ago. And how long can that go on?

The first read on manufacturing in June is no better: The Fed’s Empire State Manufacturing Survey shows the factory sector in New York State is shrinking.

Here too the “expert consensus” blew it: Not one economist polled by Econoday figured on this outcome. We’re looking at nine months of weak numbers now… and two negative readings in three months. Heck, the index was performing stronger during the dead of winter — which is the mainstream excuse for the economy slowing down during the first quarter.

As Jim has long said, none of this will turn around without “structural change.” This morning, we see a graphical representation of this warning.

“Unless the United States reverses its decline in economic freedom, the best Americans can hope for is middling growth in living standards, and they may not even get that,” write economists W. Michael Cox and Richard Alm.

Cox and Alm have put a new spin on the “Economic Freedom of the World” index put out by Canada’s Fraser Institute, measuring the amount of red tape business has to contend with, country by country. They find the long-standing gap in economic freedom between the United States and the rest of the world is shrinking… 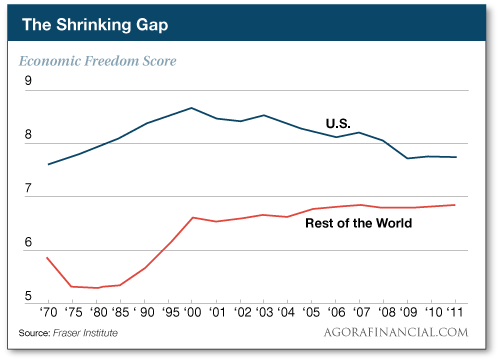 “Where economic freedom falters, capital will be scarce, misused and poorly maintained,” the economists write at Investor’s Business Daily. “Over time, people will become poorer.”

P.S. If today’s downer news were as bad as it got, that would be one thing. But as you’re probably aware, Jim Rickards anticipates much worse. He compares the international monetary system to a “House of Cards” — vulnerable to collapse at the slightest disturbance.

Three days from now, Jim will be with us here in Baltimore… meeting with a small group of our readers who’ve paid upward of $6,500 each. They’ll learn how the collapse will unfold… and what action steps they must take now.

You have the chance to listen in on these sessions for a much lower cost. Through tomorrow at midnight, you can get the best available price on high-quality recordings and full transcripts — nothing will be held back. Take advantage of your early-mover discount and click here.