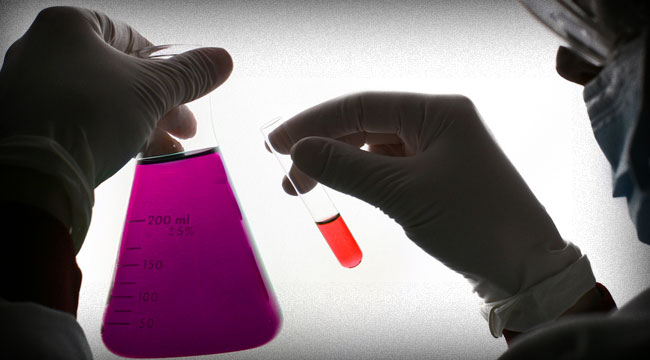 Increasingly, the great new medical technologies aren’t coming from the pharmaceutical behemoths, but from scrappy little biotech upstarts. In few instances is this truer than in the field of cancer immunotherapy.

Immunotherapy is defined as a “treatment designed to produce immunity to disease or enhance the resistance of the immune system to an active disease process, as cancer.” Simply put, cancer immunotherapy activates the body’s powerful and complex immune system so that it can do its job better.

Immune system-based therapies are becoming a proven route to improving cancer treatment. There are multiple immunotherapy innovators, several of which have performed well in our Technology Profits Confidential portfolio due to their deep and diverse developmental pipelines.

Some immune-based therapies work, for example, by training the immune system to identify and attack cancer cells. Functionally, therefore, they are vaccines.

Others use antibodies to achieve similar results. Antibodies are an important part of our natural biological defenses. They are used by the immune system to identify infectious microbes and mutant cancer cells. Once these foreign objects are flagged by antibodies, other immune system components, such as white blood cells, move in for the kill.

ADC technology uses engineered antibodies to target molecular markers that are overexpressed on cancer cells, yet absent or uncommon on healthy ones. The attached toxin is then released to kill the cell.

Another kind of ADC technology doesn’t link antibodies directly to cancer cells, but instead, attach an antigen to an antibody that is targeted to attach to antigen-presenting cells (APCs) — specifically, dendritic cells. Once attached to a dendritic cell, it presents an antigen that’s frequently present in a wide variety of cancer types, including sarcoma, myeloma, melanoma and cancer of the bladder, breast, ovaries and lungs.

Many antibody-based cancer immunotherapy companies imitate this natural defense mechanism by creating custom antibodies to home in on molecular targets present on cancer cells. Once an immune system cell, such as a T-cell, comes into contact with an attached antibody, it attacks the tagged cancer cell.

Then there’s technology that uses compounds that aren’t antibodies, but protein that stimulates the immune system by proliferating and mobilizing bone marrow stem cells and immune cells.

When choosing different companies that specialize in this kind of technology, many factors come into play. But when picking companies undergoing trials, it’s better to go with fully human antibody therapeutics over “humanized” mouse (or any other animal) antibody.

This can reduce the effectiveness of an antibody therapy and require more frequent dosing. And because antibody drugs are large proteins that must be administered through injection, the frequency of dosing is important to patients.

Takeaway: keep these kinds of immunotherapy approaches in mind when looking for biotech companies with high growth potential.

Say Goodbye to the World As You Know It

The continued demand for AI technology means big things for the industry. We’re entering a prime time of exponential growth for AI that could earn early investors fortunes. Today Ray Blanco explains how.