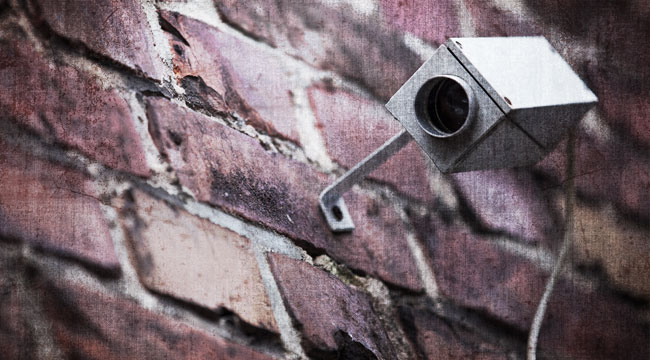 Surveillance Has Changed Us

My passport is festooned with patriotic blather about freedom and democracy. It didn’t used to be this way. The less freedom we have, the more government has to convince us that it exists. But none of it rings true anymore.

One page of the passport quotes Lincoln: “that government of the people, by the people, for the people, shall not perish from the earth.”

Amused by that on several levels, I nearly sent out a status via Twitter. I had typed the following revised version that embodies a wistful fantasy: “that government shall perish from the Earth.”

But just before sending, I hesitated. You see, while doing this, I was boarding a flight from Frankfurt back to Atlanta. Presuming that the feds are reading everything, I thought that posting such words, however funny, would be too risky.

What if I found myself being detained once having landed? I might face a barrage of questions about the meaning of my little text. Did I have a diabolical plot in mind to smack the government in some way? I imagined myself having to explain polycentric legal theory and market forces to thugs in some isolated cell.

So instead of posting that little update, I pulled back. I censored myself. Doing so felt just a bit odd in some way.

This is what it has come to in the surveillance state. In my entire life, I don’t recall ever pulling back from saying what I think. But these days, prudence rules. This is how I imagined things were in the Soviet Union in the old days. I recall thinking during the Cold War how great it is to have free speech, to not live in fear, to not be afraid of expressing political opinions.

Here we are in the latter day of the war on terror and we are stuck now with a jumpy regime that collects our every correspondence and is ready to misunderstand everything we write. We no longer communicate with confidence of privacy to our friends. We don’t post truthfully to our followers. We no longer send authentically private emails. In every case, we edit ourselves because we know there is a third party listening in, and that party is government.

Government doesn’t really care if we if are posting about our dinner plans our shopping excursions or our kids’ grades and community socials. What government cares about is politics, which is precisely why the Founders threw that First Amendment into the Bill of Rights. You have to be free to speak about politics or it can’t be said that the country is truly free.

But it is precisely politics that get us in trouble these days. The tax authorities harassed groups based on political outlook. They were targeted. So it is with all our communications. Express an opinion that government ought to be upended in some way and it would not be surprising at all to come face to face with an interrogation squad that understands nothing about philosophy or economics.

You might be thinking, Oh, that’s just ridiculous; you could have posted that without consequence. And maybe that’s right. But who is to say for sure? Do we really know what kind of language triggers the authorities? We do not. It might be a slow news day and you suddenly find yourself on the receiving end of some serious government muscle. Or maybe nothing would happen.

But how many people today are playing it safe just in case? I would suspect that it is nearly universal. There is a chill in the air. You whisper your opinions only to those whom you trust. You don’t really tell pollsters what you really think — most people just hang up — but that’s been true for some time. Now you don’t even tell your friends on Facebook. Even email seems sketchy.

There is another feature of all this that strikes me. In some respects, you can tell that the war on terror is ramping down. President Obama has called for an end to the “boundless war on terror.” He’s even dismissed the idea that the feds would hound Edward Snowden. It’s purely anecdotal, but I’ve had fewer harrowing experiences at the airport today than I had five years ago. Security is often a snap. Even customs and passport checks are easier than they once were.

Five years ago, American citizens had to leave an extra hour or two early just to get through the maze of bureaucracy when coming back into the country. I went through the whole mess yesterday at the Atlanta airport in less than 15 minutes. None of it seemed intrusive at all. I could have carried a suitcase full of Cuban cigars and no one would have known the difference.

It’s true across the board. Drone strikes are down. The police today are less brutal in general than five years ago. The trigger-happy hysteria of five years ago has gradually mutated into a routine bureaucratic blase.

Yet the appearance of less frenzy is somewhat illusory. After Sept. 11, the government started collecting every bit of data it could on us, building profiles of every single American. If you should end up on the wrong side of the law, the power elites are now in a position to rifle through a decade-plus of emails and chats. This is the stuff of which blackmail is made.

The political climate has changed. When Edward Snowden’s revelations came to light, many people were upset about the violation of human rights this implies. But plenty of others defended the surveillance as something necessary in times of high threat levels. So you can see that we’ve already been conditioned to accept a higher level of despotism than ever before.

This follows the racket model of government expansion as explained by Robert Higgs in his book Against Leviathan. It goes like this. During war and depression, government expands. When the crisis is over, government contracts. But the new normal is never the old normal. We have become accustomed to a new level of command and control. This is the racket at work. It might seem like we get freedoms back, but we do not. Instead, we just get used to being less free.

This is what happened during and after World War I and World War II and the Great Depression. The same pattern is taking place today. The war on terror is abating — after 12 years of hell. But in the new normal, surveillance is just part of the process of governing.

No law on the books even authorizes it, write Jennifer Stisa Granick and Christopher Jon Sprigman in The New York Times. “Through a series of legal contortions, the Obama administration has argued that Congress, since Sept. 11, intended to implicitly authorize mass surveillance.”

We put up with it because it seems less bad than just a few years ago. The reality is that we are more controlled by government than any previous generation.

So yes, we watch what we post. The truth is scarcer than ever before.

An EXPLOSION Near My 4yr Old Son...

Over the weekend Zach Scheidt was with his 4-year-old son Caleb, when an explosion detonated 40 yards from them… Now the explosions, gunfire and military operations that I witnessed this weekend were just training exercises. But for all too many people in the world, the threat of violence is a very real possibility. Today, Zach shares three defensive names to add to your portfolio…