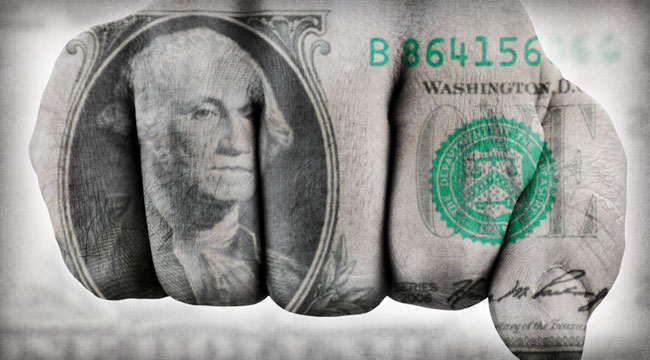 A Strong Dollar's Not All That Bad

If the United States has a strong dollar and you want to buy an iPad, an iPhone 6, a German car, a French wine, vacation in Australia or do anything requiring you transact with a foreign country, then the strong dollar is going to make those prices cheaper in dollar terms.

They may be constant in Swiss francs or Australian dollars or Euros or whatever, but for a dollar buyer, those things are all going to get cheaper. That’s deflationary. That is a good thing for you.

But the Fed’s wants inflation. Inflation, the theory goes inspires the economy to grow and employment to go up. A strong dollar gives them the exact opposite. So if you’re the Fed, what do you do?

Well, one thing you might do is keep interest rates low and try to cheapen the dollar. And you may even go back to QE4 in early 2016 if that’s what it takes. That’s the most likely approach and I’ll explain why in a moment.

If you follow the Rickards approach you can imagine what happens in the meantime.

But first, there is another path to think about, which is: What if the Fed adopts the Jim Rickards theory? I don’t expect them to, believe me. But let’s just say they did. Assume the decided that a strong dollar’s not all bad; that it would make the US a magnet for capital inflows from abroad as an attractive place to invest.

Grow the economy the right way — by making structural reforms like building the Keystone pipeline, that get the U.S. economy back to a strong growth and high productivity. I don’t think they’re going to do that, but let’s say they did. That could be very good a year and a half or two years from now.

If you follow the Rickards approach you can imagine what happens in the meantime.

If you get that kind of deflationary crash, you’re looking at a recession, most likely. You’re definitely looking at higher debt. You’re looking at what everyone likes to call “austerity.” I actually consider it to be a form of prudence. But you’re looking at really a serious contraction in the United States: lower unit labor cost, wage cuts for labor, higher unemployment; all the characteristics of a recession.

But then, you make adjustments, you go through it and come out the other side, let’s say in mid, late 2016, early 2017 with a much stronger economy having made structural changes, having made the economy more competitive, having attracted capital inflows, having increased productivity.

Good things can come out of a strong dollar.

Now imagine the short-term political pain, especially in 2016 which is an election year. Neither the Republicans nor the Democrats are going to be cheering the Fed if they’re putting the US economy through the wringer.

While that’s a possibility, it’s not one I expect. Politicians and central bankers, for that matter, always like the easy way out. Which means a weaker dollar.

What I expect is this deflation will be short-lived. For the next few months, the dollar will get stronger. But then the economic data early next year is going to come in weaker than people expect. The job machine’s going to stall. Growth is going to stall.

Then the Fed’s going to panic. They’re going to say: “Hold on, we tapered and we were getting ready to tighten, but it looks like we tapered and we’re going to be tightening into weakness. This is deflationary. This is making the dollar too strong. We need to shift gears.” And when they do, they’ll hold a press conference. Send out some press releases. And they’ll signal they’re not going to raise rates in 2015 at all. They may not raise rates until 2016. We’ll see.

Every country in the world is wishing for a weak currency, but you can’t have it.

Every country in the world is wishing for a weak currency, but you can’t have it. If somebody’s weak, somebody else has to be strong. So right now, the dollar is strong. The Euro and the yen and other countries’ currencies around the world are weaker. This is by design.

If you look at second quarter and third quarter GDP growth, kind of put yourself back in the middle of this year, June, July, August 2014, somewhere in that time frame It looked like the United States was by far the strongest economy. That’s what a lot of the data indicated. And it looked like the United States could throw everybody else a lifeline, saying in effect: hey, Europe, hey, Australia, hey Japan, you guys can all have a weaker currency; we’ll have the strong currency for now.

That’s the “beggar thy neighbor” approach. There’s always somebody trying to steal some growth from somebody else because we look like we’re doing okay.

But starting early next month in January, February March, if the data comes in and the US economy looks a lot weaker, the United States will have to pull back the life preserver and use it ourselves. The Fed will do that by trying to weaken the dollar.

When you look around the world, it’s not a pretty picture. But the big question, is the Fed going to tolerate a strong dollar or not? If the Fed’s going to tolerate a strong dollar, we’re going to have other problems around the world: lower gold prices, lower oil prices, collapsing emerging markets debt, collapsing oil sector debt, credit crises, etc. And probably a really bad time. But the US itself might be in a better place a year and a half from now. And it will also have a rough go in the meantime.

If, on the other hand, the Fed says we can’t tolerate a strong dollar, we’re back to “beggar thy neighbor.”

P.S. Imagine a bunch of thirsty soldiers. They’ve been fighting in the heat. They get a break, and they’ve got one canteen. There are five of them. They have to pass the canteen so everybody can take a gulp, but they can’t all drink at once, because there’s only one canteen. That’s the way to understand today’s currency market.

P.P.S. I recently launched a brand new investment letter called Strategic Intelligence. Besides my occasional essays on the Daily Reckoning, it will be the only place to receive my ongoing analysis. Click here to subscribe now. When you do you’ll receive a free copy of my book… three free reports I’ve written… access to my live monthly briefings and more — all for just $49 per year. Click here for more details.