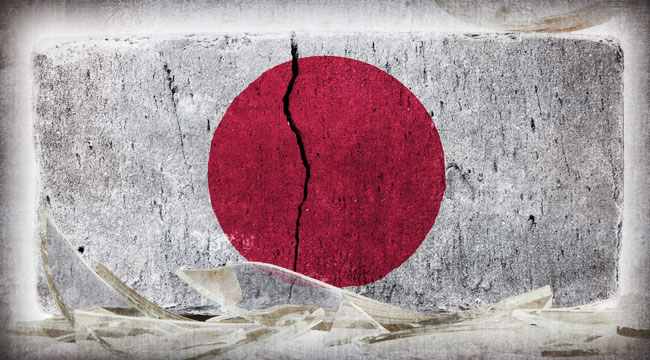 Japan is sinking in quicksand. The more it struggles to free itself, the faster it sinks. But that won’t stop it from trying… even if that means destroying itself.

For evidence, we turn to a bizarre question proposed in yesterday’s issue of The Atlantic:

“Is Abenomics Doomed — or Will Japan Un-Doom Itself?”

Umm… What? How does a country “un-doom” itself? Isn’t being “doomed” about as finite as it gets?

“After an amazing eight-month run,” The Atlantic continued, “where Japanese stocks went up, and up and up over 80%, the Nikkei has collapsed again, and again and again over 20% from its peak. It fell 6.4% in the early hours Thursday morning to officially enter ‘bear market’ territory.

“Nobody said it would be easy for Japan to un-doom itself.”

In fact, it’s likely impossible. Japan has existed in a sort of “economic no man’s land” for the past two decades, perpetuated by a print-first monetary policy.

But seeing as others do “doom” so much better than we do, we’ll defer to one of its best practitioners, Vancouver fave Dr. Marc Faber.

“The yen is oversold, and stocks are overbought, and the correction is forthcoming,” Dr. Faber says. “But anytime the market would drop in Japan and the yen would strengthen, there will be more money printing.”

Ah… Thank god for money printing. When times get tough, you can just print your way out of trouble. Or so we’re told.

“As a result of massive money printing,” Dr. Faber continues, “the yen goes down and the bond market in Japan collapses. This would force the Bank of Japan to monetize even more because as interest rates go up on the Japanese debt, it becomes a burden on the Japanese government to pay the interest on the debt. So it would have to be met by more money printing, and that would lead to more yen weakness.”

And on and on it goes… until the yen is worth even less than the paper it’s printed on.

Such is the fate of all paper currencies backed only by the “faith and credit” of an untrustworthy government. The principles of “sound money” are largely ignored or forgotten. No one practices them anymore. They are the “Latin language” of global economics — discussed only in “theory” by a few steadfast economists who continue to pine for their return.

Recall back to last Thursday, when we talked “Love, War and Politics.” We couldn’t tell if Mr. Abe was grasping for something… or anything… or if he was seduced by the same advice that hypnotized the Gipper.

There, we mentioned our interview with Lewis Lehrman — co-author of the book we’ve taken to calling the “Long-Lost Gold Bible” — and one of the “men in the room” during the Reagan administration.

What he told us has stuck with us — specifically his analogy for economic reform. He said it was a table that required four “legs”: low taxes, deregulation, balanced budgets and sound money.

But he doubted that Reagan had the political staying power to bring the U.S. back around to sound money. “All four legs of the table had to be built at the same time,” he explained to us. “To just go with two legs, namely tax rate reform or deregulation, you’d have a very unstable table sitting on two legs.”

The other two legs — balanced budgets and sound money — are now largely absent from the conversation… save for a few economists on the fringe and cranky newsletter writers. Still, we push on…

Ed. Note: “I’m not a ‘debt guy,’ Addison,” Arthur Laffer told us when we first met him… Arthur is one of those steadfast economists we mention above. And we were proud to feature him prominently in the email edition from which this piece was taken. If you’re not currently receiving the free Daily Reckoning email, you’re only getting part of the story. So do yourself a favor… Take a minute to sign up for free, right here.