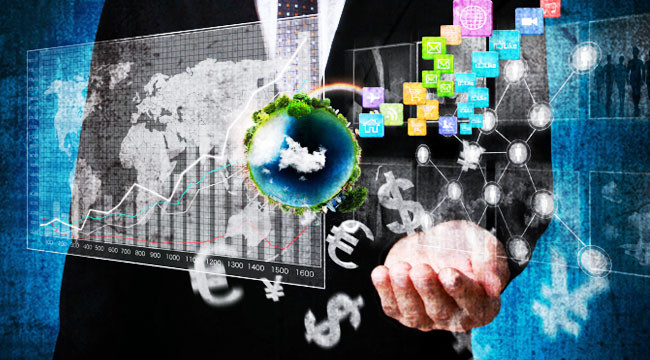 So Where's the Hyperinflation Already?

The Federal Reserve has grown the monetary base from $827 billion to $3.1 trillion in five years. At the same time banks have stuck $2 trillion more than required in reserves at the Fed. This money lays around fallow, earning just 25 basis points from the central bank. A blossoming to its full potential would mean $20 trillion in new money, eviscerating Ben Bernanke’s deflation fears.

So far these extra reserves do nothing but keep followers of the Austrian School of Economics and fellow inflationphobes up at night. It’s not a matter of if there will be a repeat of Gideon Gono’s Zimbabwe, but rather when it will happen. After all, the Fed is all powerful. Or is it?

Ben Bernanke can lead bankers to liquidity, but he can’t make them lend. Bankers haven’t taken the plunge because other regulators are engaging in what Robert Prechter, renown financial author and stock market analyst, calls “The Hidden War on Credit.”

In the latest Elliott Wave Theorist, Prechter’s financial publication, he points out the Fed is demanding that JPMorgan and Goldman Sachs increase capital levels. Regulators around the world are telling banks the same thing, reduce leverage. This is anything but inflationary.

Freddie Mac and Fannie Mae have been going after big banks for mortgage loan documentation irregularities. In separate actions Bank of America is being sued for racketeering, LIBOR manipulation, violation of the Telephone Consumer Protection Act, violation of federal antitrust laws, failure to modify loans and who knows what else.

As one might expect, all of this litigating does not inspire lending.

Prechter mentions laws in Nevada that make it difficult for creditors to prove they have standing to foreclose. In Las Vegas alone, upwards of 100,000 houses are vacant and/or occupied by people who haven’t made a payment in three or four years. These non-performing assets are stuck on bank and shadow bank balance sheets keeping these lenders from aggressively making new credit.

The Elliott Wave guru lives in the Atlanta area, ground zero for bank failures. When banks fail, bankers are sued by the FDIC. “Various bankers are being charged with fraud and fined tremendous amounts of money and sent to jail because they made ‘unsafe and unsound’ loans,” Prechter writes. “Bankers are scared stiff to make new loans, because government agents are on their backs.”

In fact, American Banker reports civil litigation against bank officers and directors of failed banks is just beginning. “An April report by Cornerstone estimated that the FDIC is on pace to file about 40 lawsuits in 2013, the most in any year since the crisis began.”

At the height of the boom, bankers were beloved, now the inteligencia wants them jailed. “This is not a way to expand credit; it is yet another way to contract it,” writes Prechter.

Flying under the radar is a new bank leverage proposal issued by the FDIC in July. In a post entitled “The $600 Billion Bank Deleveraging No One Is Talking About,” Zero Hedge explains the new proposal will radically reduce the leverage used in the repo lending market. “As Barclays notes, changes to the risk-weightings of low-risk assets in the repo markets means US banks will need to deleverage by raising $30 billion of fresh capital or reducing their (mostly low-risk) assets by $598 billion.”

Bank stock analyst and investor Richard Lashley spoke at the Agora Financial Investment Symposium in Vancouver, making the case for bank shares. Lashley pointed out the banking industry provides less than 30% of total U.S. credit issued, less than half the percentage the industry provided in the 1970’s.

The industry has shrunk to only about 7,000 institutions from 18,000 in 1985. The numbers won’t be growing as the FDIC is not issuing new bank charters. Proposed capital and regulatory requirements are forcing small to mid-sized banks to sell. Larger banks can’t grow organically so they are ready to buy. Lashley believes the industry will shrink further to 3,000 banks.

While Lashley insists the industry is in much better shape than people think, a full five years after the financial crisis there are still 612 banks on the FDIC’s “problem bank” list.

None of this is bullish for increased lending. Lashley points out that the Fed’s quantitative easing policy has been good for banks so much as it has helped real estate values and thus reduced credit losses. It has created massive amounts of cheap deposits, and provided a steep yield curve. However, the money has gone into cash and securities, not loans.

So all this Fed money creation hasn’t spurred lending that would increase the money supply. Prechter explains why this happened citing four myths of central banking.

The first myth is “The Fed will drop money from helicopters.” The central bank has not bought every asset in sight with money created from nowhere. “What the Fed has always done, and is still doing, is buying U.S. Treasury bonds, which are among the safest assets in the world,” writes Prechter. The mortgages purchased by Bernanke and Company are government backed and of recent vintage and so are better quality than mortgages originated at the top of the boom.

Secondly, Prechter states, “Central banks will just print money.” If Cyprus is any indication, bank depositors will take a haircut in a crisis instead of the central bank printing over it.

Third, “Central banks stand ready to be lenders of last resort.” Not necessarily. Prechter cites an article from The Telegraph. “Savings accounts in Spain, Italy and other European countries will be raided if needed to preserve Europe’s single currency by propping up failed banks, a senior Eurozone official has announced.”

And finally, the fourth myth, “Inflation is determined by the expansion of base money.” Prechter argues that inflation is an expansion of money and credit. Meanwhile, Sweden, Norway and France are demanding that people use credit cards instead of cash. Authorities desperately want cash to stay in banks to prop up the debt (asset) side of their balance sheets. “That doesn’t happen in hyperinflationary times; it happens when bankers are worried about deflation,” Prechter writes. When consumers pull cash out banks it is deflationary. When deposits leave, loans must be liquidated.

In his 1934 book, Laissez Faire Club selection, Theories of the Trade Cycle, Alec Macfie pointed out central banks can create money but not money velocity. Since the financial crash, velocity has plunged.

Believing inflation is right around the corner is the popular opinion. But, not necessarily the correct one. Prechter did a Google search on March 13, 2013 “Inflation will rise in 2013.” There were 50,200 results. “Inflation will fall in 2013” on the same date generated 7 results.

Resource investing guru Rick Rule likes to say, an investor must either be a contrarian or a victim. Falling inflation is clearly the contrary opinion.