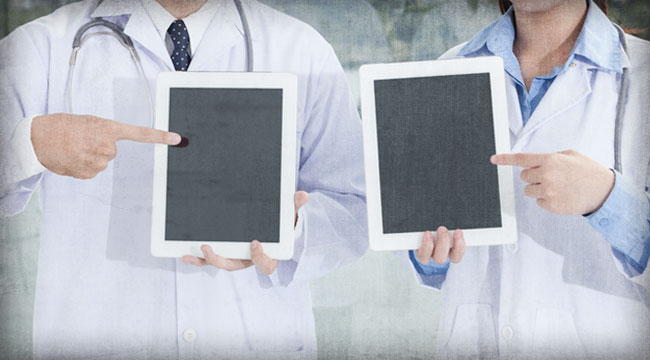 Disruptive Innovation Will Change How You View Obamacare

Health care costs in the U.S. have been rising so steadily for so long that containment barely seems possible. Even optimists don’t dream of cutting the price tag. As its official name — the Patient Protection and Affordable Care Act — suggests, Obamacare aims for affordability, not radical reduction.

But at a time when we’re all walking around with more computing power in our pockets than NASA used to send Apollo 11 to the moon, perhaps we should be setting our expectations higher. Is it really so hard to imagine, in 10 years or so, the advent of advertising-sponsored health care? Or at the very least, bulk-purchased cardiology readings for a Netflix-like $8.99 monthly subscription?

When you have a heart attack in the future, the beta-blocker coupons will arrive faster than the ambulance.

The device that could potentially enable such scenarios already exists. The Alivecor Heart Monitor, approved for over-the-counter use by the Food and Drug Administration in February 2014, is a shell that fits over iPhones and Android devices. It converts electrical impulses from a user’s fingertips into ultrasound signals, which are then picked up by the phone’s microphone and processed using Alivecor’s app.

Users can email the single-channel electrocardiogram (ECG) produced by the Heart Monitor to their physicians, or they can pay a small fee to Alivecor directly through the app for analysis by a cardiac technician or board-certified cardiologist within 24 hours.

Currently, the heart monitor costs $199. The ECG analysis ranges from $2-12 a pop. In comparison, two researchers who published a study in the February 2014 issue of JAMAInternal Medicine queried 20 Philadelphia area hospitals about the fee they charged for an ECG-and found prices ranging from $137-1,200.

So Alivecor’s fees are already quite nominal. But imagine if, say, Google or Amazon decide to incorporate such functionality more seamlessly into their devices. ECG analysis would likely be offered for free or near-free, in return for opt-in consent to share this information with advertisers and other third parties. When you have a heart attack in the future, the beta-blocker coupons will arrive faster than the ambulance.

In 1997, Harvard Business School professor Clayton Christensen introduced the concept of “disruptive innovation,” the process by which a “simplifying technology” combined with a “disruptive business model” upsets established markets and radically broadens access to goods or services.

The Model T is a classic disruptive innovation. The PC is another. In a September 2013 white paper published by the Clayton Christensen Institute (CCI), Ben Wanamaker, executive director of CCI’s health practice, and Devin Bean, a research associate at CCI, examine the disruptive potential of the Affordable Care Act.

In their estimation, some aspects of Obamacare encourage disruptive innovation, at least theoretically. To accommodate the millions of new consumers that the individual mandate has created, the “already burdened” health care system will potentially turn to “new care delivery models that leverage less-credentialed practitioners to deliver care for more routine health concerns.”

Similarly, employers who are mandated to provide care for their employees will look for the least expensive options available, creating “opportunities for new and disruptive entrants” to offer cheaper alternatives to traditional forms of coverage from established providers.

But while Obamacare creates new health care consumers, it also dictates the kind of health care these consumers must purchase, which severely inhibits innovation. As the CCI white paper suggests, minimum “essential” benefits that can only be purchased through tightly regulated insurance exchanges “put a floor on the low end of coverage.”

Because of these policies, Obamacare simultaneously “overshoots the needs of many customers while preventing innovation that could fundamentally lower the cost of care by requiring that insurance plans mimic the legacy state insurance markets.”

Obamacare, in short, puts the weight of law behind the status quo. To illustrate this fact, Wanamaker and Bean offer an historical hypothetical. If Obamacare had existed in the 1940s, insurers would have had to offer sanitarium care for tuberculosis treatment, because that was the standard level of care back then.

And even when antibiotics emerged as a cheaper, more effective form of treatment, health care options that didn’t include sanitariums would not have been permitted — at least until legislators got around to removing that service from its mandated package of minimum essentials.

In addition to “lock[ing] customers into outdated, expensive treatment options,” Wanamaker and Bean maintain, Obamacare – compliant health plans will, “by virtue of the benefits they cover,” funnel most care into “traditional venues of care – the hospital and doctor’s office.” So ultimately, all the entities that have been in charge as health care costs have soared achieve further entrenchment via Obamacare. Washington loves an incumbent!

“When you are young and healthy, you may not think you need health insurance. But life is unpredictable,” goes an Obamacare recruiting pitch at NYC.gov. “Health care is expensive. Making sure that you are covered is very important.” Granted, even one-percenters who can afford concierge genetic sequencing can’t foretell car crashes or autoerotic asphyxiation mishaps.

But new technologies are making our medical destinies far more predictable than they once were. And the high price of health care isn’t nearly as predestined as the Obamacare pitch insists.

In reality, we are heading toward a world of highly distributed and comparatively cheap diagnostic tools that will allow patients to self-collect health data more assiduously than a team of ICU nurses. The Cellscope Oto turns your smartphone into a digital otoscope for viewing the inside of a person’s ear.

The Scanadu Scout, a small, puck-shaped device scheduled to hit the consumer market in 2015 with an estimated retail price of $199, is an attempt to approximate the tricorder of Star Trek fame-a sensor-rigged device that can quickly monitor your temperature, blood oxygenation, respiratory rate, and more, then make an automated diagnosis using intelligent algorithms.

In addition, simple but ingenious innovations, such as “smart pill bottles” that track whether or not you’ve taken your medication, or predictive analytics programs that identify which patients are least likely to stick to drug therapy regimens and thus need more intervention from caregivers, promise to significantly improve outcomes.

Eventually, all of the data that devices like the Scanadu Scout produce will be stored, shared, and compared as never before, producing more accurate patient histories, more closely tailored diagnoses, and better predictive insights.

The transition to this new world won’t always go smoothly, of course. Making powerful diagnostic tools available to people who remain completely stymied by the self-checkout line at CVS promises to be a recipe for both comedy and tragedy.

But health care is on the verge of becoming far more individualized, far more contextualized and collaborative, and most of all, far more ubiquitous. And as this happens, the Affordable Care Act will start to look more and more anachronistic, a 20th-century solution imposing itself onto a rapidly shifting set of 21st-century conditions.

Indeed, imagine if, in the late 1990s, the federal government decided to ensure our right to affordable music by making every American purchase a monthly subscription to the Columbia House Music Club or Tower Records. That would have been great for the Columbia House Music Club, Tower Records, and, say, Sisqo, but would it have been great, in the long run, for the American people?

If you want to pay hundreds of dollars for a traditional ECG, many health care providers will accommodate your desires. But as the Alivecor Heart Monitor suggests, cheaper alternatives exist.

Obamacare doesn’t prohibit consumers from pursuing these new cheap alternatives. Nor does it prohibit companies from offering products and services that could radically reduce prices. But unfortunately it will be a long time before you can expect an iPhone a day to keep doctors and insurance agents completely at bay.

As long as those $2 ECGs from Alivecor can detect a pulse, you’re going to have to keep paying substantial premiums to Aetna or Blue Cross each month. Essentially, Obamacare establishes an obsolescing way of doing business as a pre-existing condition.

Greg Beato
for The Daily Reckoning

Ed Note: This technology could change the world. Just as important, it could make some people incredibly rich. If you had subscribed to the email edition of Laissez Faire Today, you would have learned about a way to cash in on similar types of companies. Businesses that stand to generate a ton of profits when the tech boom lifts the American economy. Sign up today and don’t miss out on future opportunities.

Today, Zach Scheidt reveals the technology he saw firsthand last week in Las Vegas, and explains how it’s an absolute game-changer for Ford and GM…

Greg Beato is a contributing editor for Reason magazine. He has written for dozens of publications, including SPIN, Wired, Business 2.0, and the San Francisco Chronicle.