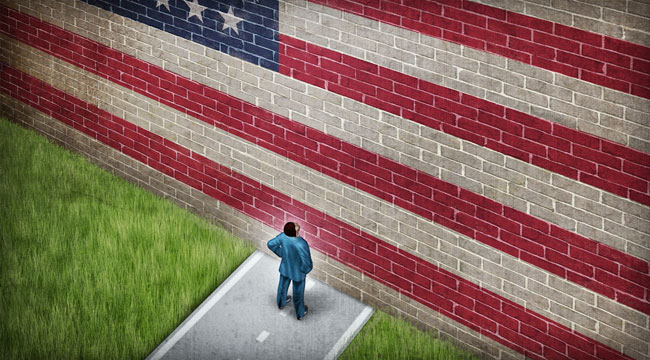 Six Signs Your Government’s Too Big

In today’s episode, we’re going to show you six “red flags” to look out for.

These flags will inform you — with little doubt — that your government is, in fact, too swollen.

No. 1: Your government is too big if government contractors get paid to hit the refresh button for months on end…

“Employees at an ObamaCare processing center in Missouri with a contract worth $1.2 billion,” one New York Post article reads, “are reportedly getting paid to do nothing but sit at their computers.”

Serco, a company owned by a British firm, was awarded over a billion dollars to handle ACA applications.

According to one whistleblower, Serco is attempting to hide the lack of actual work they’re doing. Instead, its HR department is hastily hiring employees in its centers in Missouri, Kentucky and Oklahoma.

Of course, duly compensated with each new body in a chair.

Weeks can pass, the whistleblower told St. Louis’ News 4, before employees receive even one application to process.

Sure, it’s no Snowden revelation. But, hey, it’s good to see the government still living up to its reputation.

No. 2: Your government is too big if colleges have “free speech areas”…

Apparently, Broward College in Florida now has “free speech areas” for talking to students about the government.

After spending 90 minutes talking to students at the school and asking them “do you think big government sucks?”, she was told by a security guard that she needed to go to the “free speech area.”

When Cooley refused to show identification, she was promptly surrounded by several officers.

She asked one officer if she was allowed to talk to students.

“No, you cannot,” he replied. “You need to leave the campus now. If you do not leave you will be arrested for trespassing.”

“I would speculate this happened because of heightened security for the governors debate, but that just shows the larger your government grows, the quicker your rights are violated.”

No. 3: Your government is too big if it can’t stop supplying radical terror groups with high-grade weaponry…

“At least one bundle of U.S. weapons airdropped in Syria appears to have fallen into the hands of ISIS,” The Daily Beast reported yesterday, “a dangerous misfire in the American mission to speed aid to Kurdish forces making their stand in Kobani.”

The tech-savvy ISIS has been broadcasting their American-made weapons on the video sharing platform for weeks. And they have plenty to show off.

“ISIS videos have shown its fighters driving U.S. tanks, MRAPS, [and] Humvees,” the blog writes. “There are unconfirmed reports ISIS has stolen three fighter planes from Iraqi bases it conquered.”

No. 4: Your government is too big if the arm that has secretly supplied weapons to foreigners for 67 years says it doesn’t work and the officials tell them to do it anyway…

“If you’re someone who’s gung-ho about secretly sending American weapons abroad,” Elias Isquith writes for Salon, “the agency’s conclusions are not pretty.”

In its 67-year history, the CIA has armed hundreds of thousands of troops to do Uncle Sam’s bidding.

And they’re just now, according to the data in one classified report, realizing it’s a failed method.

“The still-classified review,” The New York Times reports, “one of several CIA studies commissioned in 2012 and 2013 in the midst of the Obama administration’s protracted debate about whether to wade into the Syrian civil war, concluded that many past attempts by the agency to arm foreign forces covertly had a minimal impact on the long-term outcome of a conflict.

“They were even less effective, the report found, when the militias fought without any direct American support on the ground.”
I know what you might be thinking…

Yes, this apparently-leaked document could, of course, just be a ruse to drum up support for troops on the ground.

A new tactic in the government playbook?

No. 5: Your government is too big if it hires an Ebola czar that knows nothing about Ebola. His only real job is to mix up another layer of bureaucracy into the already-rich batter…

His name, as you may know, is Ron Klain.

On Friday, Obama announced his decision to appoint Klain as the Ebola coordinator. Klain’s job? To work hand-in-hand with the CDC to facilitate a speedy response.

His goal? To be present, ready and waiting to help prevent further spread of Ebola.

And on Saturday Obama hosted an Ebola strategy meeting. Klain was, again, nowhere to be found.

It’s also reported that he’ll be skipping a House hearing this Friday that will examine the current U.S. response to Ebola.

Sounds like Obama has picked the right man for the job, eh?

If only all our government officials were so laissez-faire…

Oh yeah, there’s another hitch: Klain knows nothing about Ebola. But he does know the slope of the Hill. And as we all know, that’s all it truly takes to rise to the top.

No. 6: Your government is too big if its decisions start to mimic silly Holiday Inn commercials…

You may remember this commercial. It came out in 2001 for Holiday Inn Express.

“This is a very rare strain of the Ebola virus,” says one scientist who, oddly enough, looks extremely similar to Klain. “It produces MRNA, the deadliest of the stem loop structures.”

[The camera slowly zooms closer. Klain’s doppleganger clumsily knocks the glass container holding the virus off the table. It breaks on the floor. The other scientists gasp.]

“Excuse me,” another scientist says, “how long have you been studying the Ebola virus?”

“Well,” he says, “I’m not actually a scientist, but I did stay at a Holiday Inn Express last night.”

[Another scientist behind him passes out.]

Someone check the Holiday Inn. Our Ebola czar has gone missing.

Ed. Note: Missing out on everything Laissez Faire Today has to offer? Our articles in the Daily Reckoning only cover a small part. To get full unfettered access to everything, become an LFT member FREE. Click here to sign up now.