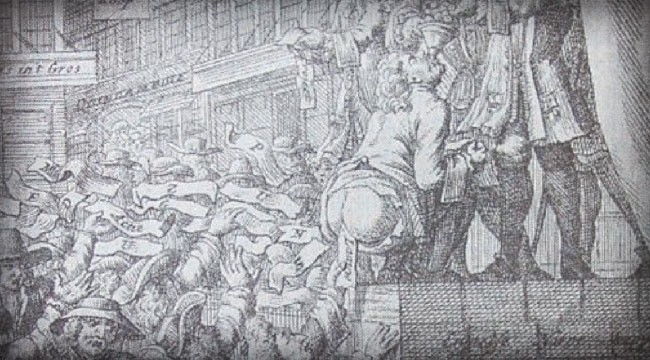 A Short History of Speculative Excesses and Wealth Preservation

As economist Hyman Minsky showed, booms actually play an important economic role — they focus resources on an up-and-coming sector and speed its development. Investors are not crazy to put money into a boom at the beginning; they are crazy to do so at the end, when prices have become absurd. The bust phase of an investment mania comes about when reality begins to nag, profits are not realized, and confidence turns to trepidation. . . and then fear. 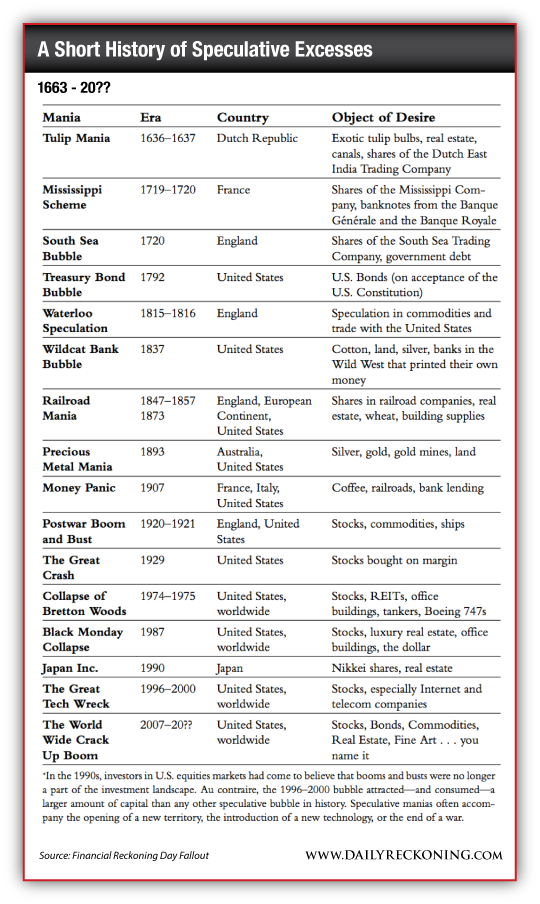 A big bust is often accompanied by rapid reductions in the money supply and a contraction of credit, as creditors fear lending to riskier and riskier clientele. Following the deflation of the John Law’s Mississippi bubble in 1720, despite the aggressive efforts of Philip II to stop it, the money supply in France decreased rapidly. The savviest investors physically removed the gold and silver coins from the country.

Having lost confidence in the paper money, spooked merchants and traders engaged in widespread hoarding of the coins, stuffing them in mattresses and burying them in holes in the ground. And bank credit shrank. Another edict stating that all notes bearing a value between 1,000 and 10,000 livres could only be used to buy government bonds, Compagnie des Indes shares, or be placed in bank accounts further reduced the money supply.

Once thought to be greater than the king himself, Law was forced, under protection of the royal guards, to live in the Palais Royale. At one point, when a mob saw his carriage pass, instead of trying to get a glimpse of the man, it attacked the carriage and smashed it to bits. Luckily for Law, he was not inside.

Later, Law was given permission by Philip II to leave France altogether — disgraced and in debt to the tune of 6.7 million livres. By the time of his death in Venice in 1729, Law, the man “ of cool calculation and dazzling innovative ideas” would, by outward appearance, be “ but a shadow of his former self. . . reduced to an aging trembler with a pronounced tic. ” But, always the schemer, Law held one more surprise for French and British ambassadors sent to review his estate.

An inventory of Law’s wealth in 1729 revealed 81 boxes of paintings, sculptures, musical instruments, and furniture. Among the 481 paintings, were originals by some of the great masters. The first page of the inventory, Trinity College Dublin professor and Law biographer, Antoin Murphy, tells us, lists 22 paintings including a Titian, a Raphael, four Tintorettos, and a Paolo.

“Flicking through the inventory, other great names appear, ” Murphy writes, “ including Holbein, Michelangelo, Poussin, Leonardo da Vinci, and no less than three Rubens! ”

Not surprisingly, following the collapse of the Mississippi Scheme, John Law was the target of enough satirical engravings to fill a popular collection — published in 1720 in Holland, under the title, The Great Mirror of Folly.

One famous engraving — a frontispiece for a short play about the mania — depicts a crowd of share speculators surrounding Law on the rue Quincampoix. The caricature of Law in the scene shows him ingesting gold and silver coins fed to him by the Duc D’Orleans, converting them into paper internally, shall we say, and a frenzied group of investors collecting the bills that fall from his backside. 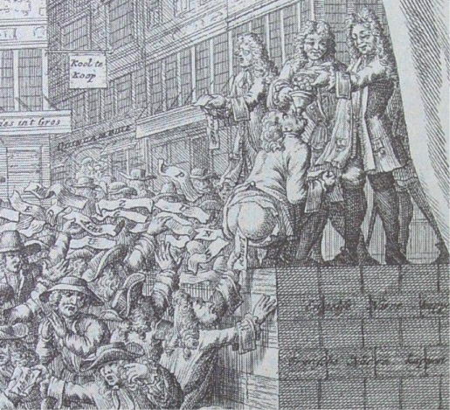 One of the central tenets of Law’s theory had been proven wrong. Once confidence is shot, a central bank cannot manage the money supply. Still, the idea persists. John Law died in disgrace, but central banking was a big a hit. The first modern central bank with any staying power, the Bank of France, was set up less than a century later following another financial disaster: the French Revolution.

There are minor investment manias, and there are major ones. Over the nearly 300 years following the Mississippi mania, the setting for investment manias has repeatedly changed, but the love interest, the dialogue, and the dramatic tension have largely remained the same.

“ The saga of the Mississippi scheme [and the South Sea bubble] is historically relevant, ” writes Marc Faber, “because it contains all the major features of subsequent manias: shady characters, corruption, fraud, dubious practices, the creation of money and the extension of risky loans in order to keep the speculative orgy going, the catalyst, which leads to the initial collapse — usually the revelation of some fraud, the inability of a large speculator to come up with the money to meet a margin call, the revelation that insiders had cashed out, or some adverse economic or political news — and then panic during which greed and euphoria are replaced by fear and the speculators ’ desire to get out at any price. ”