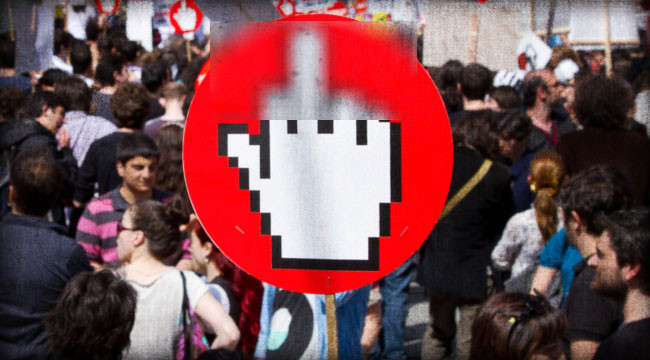 Saving the Internet from SOPA 2.0

The second part of this two-part article reveals an untold part of the story about how the Stop Online Piracy Act (SOPA) was stopped last time. And shows how, if not again stopped, how it could lead to a fundamental loss of civil rights and freedom on the Internet.

The offending legislation (SOPA) was barreling down the track, seemingly — even in the eyes of the big Internet companies — unstoppable. According to Seamus Kraft, a former Congressional aide intimately involved with stopping the attempted hijacking:

“Enter Team Issa, just before Thanksgiving 2011. A markup for the legislation had been scheduled for mid-December. We had three weeks to interdict a scheme that had been in the works for years. And the schemers had all the money and all the guns.

“Team Issa decided that its only hope was to alert the world — and allow a counterforce to mobilize and tell their government how crippling passing this legislation would be. We went into a whiteboarding session — me and three developers — walked into a room and walked out two days later, bleary eyed.

“What we had developed, nicknamed Madison, is something that would allow everyone to participate, constructively, in the writing of bills. Basically, we hacked together a way that brings in everyone who had been shut out of the process.”

An upshot of that event, not so incidentally, is OpenGovFoundation.org, underwritten mostly by the Knight Foundation and headed by Kraft, bringing constituent light into the legislative and rulemaking process. For his work Kraft was dubbed one of “the 20 most innovative people in democracy 2012” by Techcrunch.com. Kraft:

“We used this program during the legislative markup. Bills live or die by their markup. We broadcast a stable video stream of the proceedings… while following line by line. We used it to give other user proposals thumbs up and thumbs down. Everything from a Congressional markup was modeled online. And we used it to identify who was taking what out and who was putting what in… tearing away the shroud of secrecy and injecting accountability.

About six months before he died Aaron Swartz recited a truly chilling anecdote. It reveals…a desire by those with power to crush liberty…

“Citizens actually could participateand make their voices heard. At last, someone authentically had invited all the stakeholders into the room. Rep. Issa and other champions, notably Chaffetz and Polis, used this mechanism to ask hard questions and access the know how. It was revolutionary.

“Issa and his allies — backed, online, in real time, by real experts — threw everything they had at the proponents during two marathon days of hearings.  Issa proposed amendments to this high-handed bill that the proponents just couldn’t even respond to.

“The proponents hadn’t anticipated sustained or sophisticated opposition. Here they were, in front of the whole world, confronting egregious injustices baked into the proposed legislation.

“Issa kept hammering the committee all day Thursday and Friday. By the end of the day Friday, when it was clear that Issa was just warming up, the chairman suspended the markup. Congress recessed for Christmas.”

That recess gave the forces of Freedom for the Internet (and of speech, the press, and assembly), of whom Aaron Swartz was by the most credible accounts the most important leader, time to rally. Big players, like Wikipedia, Reddit, and Google, began to organize for a Jan. 18, 2012 Web uprising. The snowball started by Aaron Swartz over a year before had become an avalanche.

Issa and his allies provided the Freedom Fighters a clean focal point. Kraft:

“Jan. 18 was chosen because Issa, as chairman, had scheduled a Government Oversight Committee hearing to bring in the experts for that date. With Wikipedia preparing to close shop that day, Google draping its logo in black, and so forth, much of the Internet would be dark… or loudly protesting. But the video stream of the House of Representatives would be live. The combination could have caused the largest “viral video” in history.

“SOPA’s proponents knew that such a campaign could finish them off — forever.  They chose a tactical retreat. The bill was formally determined, by leadership and the committee chairman, to be killed a few days before the scheduled hearing.”

The Irresistible Force of the popular will met, and merged with, the Immovable Object of a handful of courageous lawmakers. So ended SOPA.

At least, so ended SOPA 1.0. A sequel, it appears, has been greenlighted by the Motion Picture Association or its constituents. Now creep back those who scheme to take the wild, fertile, and free Internet, throw barbed wire around it, and turn it into a hunting preserve for Hollywood and record companies.

About six months before he died Aaron Swartz recited a truly chilling anecdote. It reveals something about what’s really going on: a desire by those with power to crush liberty.

From a rush transcript published by DemocracyNow.org of Swartz’s keynote address at Freedom to Connect:

“I was at an event, and I was talking, and I got introduced to a U.S. senator, one of the strongest proponents of the original… bill, in fact. And I asked him why, despite being such a progressive, despite giving a speech in favor of civil liberties, why he was supporting a bill that would censor the Internet. And, you know, that typical politician smile he had suddenly faded from his face, and his eyes started burning this fiery red. And he started shouting at me, said, ‘Those people on the Internet, they think they can get away with anything! They think they can just put anything up there, and there’s nothing we can do to stop them! They put up everything! They put up our nuclear missiles, and they just laugh at us! Well, we’re going to show them! There’s got to be laws on the Internet! It’s got to be under control!’

“Now, as far as I know, nobody has ever put up the U.S.’s nuclear missiles on the Internet. I mean, it’s not something I’ve heard about. But that’s sort of the point. He wasn’t having a rational concern, right? It was this irrational fear that things were out of control. Here was this man, a United States Senator, and those people on the Internet, they were just mocking him. They had to be brought under control. Things had to be under control. And I think that was the attitude of Congress. And just as seeing that fire in that Senator’s eyes scared me, I think those hearings scared a lot of people. They saw this wasn’t the attitude of a thoughtful government trying to resolve trade-offs in order to best represent its citizens. This was more like the attitude of a tyrant. And so the citizens fought back.”

Aaron Swartz is dead now, at age 26. He took his own life after having been tyrannized by the United States Department of Justice, hounded by a prosecutor as merciless as Inspector Javert of Les Miserables infamy. Chairman Issa has written to Attorney General Holder: “The suggestions that prosecutors did in fact seek to make an example out of Aaron Swartz because Demand Progress exercised its First Amendment rights in publicly supporting him raises new questions about the Department’s handling of the case.”

One last time — and perhaps with even more potentially powerful ramifications — Darrell Issa’s integrity — the Immovable Object — joins with the Irresistible Force of the spirit of the people’s paladin, Aaron Swartz. Perhaps Swartz’s death will unleash a more explosive force for freedom than Big Government’s agents foresaw. “You can’t win, Vader. If you strike me down, I shall become more powerful than you can possibly imagine.”

Stopping SOPA, thereby keeping our Constitutional rights protected on the Internet, was a near thing. If Issa had not, by pure chance (or Providence), been a member of the relevant committee; if a scheduling conflict had kept him from the hearing; if he had just missed the cue; if he did not chair another committee giving him clout… the Internet might now, effectively, belong to Sony, Time-Warner, Disney et. al… protected, for them, by a minefield of embedded felony statutes under the pretext of “property rights.”

Let us hope that the more affluent beneficiaries of freedom of speech, of the press and of assembly — the founders of Google, Paypal, Twitter and Facebook, for example — take note — and honor the memory of Aaron Swartz. These entrepreneurs flourish, as we all flourish, from an equitable balance of property rights and civil liberty.

Let us pray Silicon Valley doesn’t get caught napping again. Next time could be the last time. Much of free speech, in practice, could be relegated from the Web to… taggers.

The Bill of Rights — including freedom of speech, the press, assembly — on the Web as elsewhere — is far too precious to take for granted.

Eternal vigilance is the price of liberty.

— Ralph Benko
for The Daily Reckoning

Ed. Note: Who will save the Internet this time? Keep watching this space to find out. And be sure to sign up for Laissez Faire Today, which will bring you the most up-to-date info on this new and destructive legislation, as it becomes available.