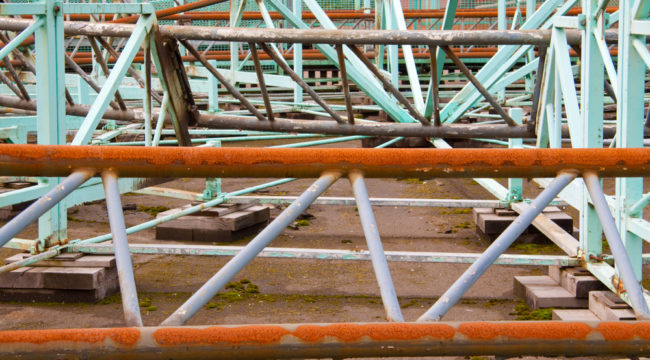 The Roller Coaster to Nowhere

There are four major factors driving the market. The factors are growth, trade wars, geopolitics and regulation of technology.

Each of the four factors has its own internal contradictions, in effect a binary outcome for each. This means there are 16 possible paths the market might follow (24 = 16). No wonder the market acts confused.

With regard to growth, the bulls expect a boost from the Trump tax cuts. They are also anticipating inflation due to strong job creation, rising labor force participation and a low unemployment rate. They expect interest rates to rise but consider this more a sign of economic strength than a cause for concern.

Strong growth is good for corporate earnings, and a little inflation is usually good for nominal stock prices, at least in the early stages. The bull case for growth is a curious mixture of the Phillips curve and the Laffer curve.

Bears point to an economic slowdown in the first quarter (most projections are around 2% or less). This is consistent with the dismal average of 2.1% growth since the end of the last recession in June 2009.

Stronger growth is impeded by demographic and debt head winds and the impact of Chinese labor and technology on global pricing power. Tax cuts are not expected to help, because the drag on growth caused by increased debt will outweigh any stimulus from lower taxes.

The Fed is giving a weak economy a double dose of tightening in the form of rate hikes and the unprecedented destruction of base money as they unwind QE. The Fed will probably push the economy to the brink of recession before they get the message and pause on rate hikes.

This bearish view combines the Reinhart-Rogoff thesis on debt death spirals with a return visit to Fed policy blunders in 1929 and 1937.

To some, the trade wars are another conundrum. There is little doubt that a true trade war will reduce global growth. But many are wondering if we’re facing a trade war or just a series of head fakes by Donald Trump as he pursues the art of the deal?

For example, Trump imposed Section 232 tariffs on steel and aluminum imports and then almost immediately carved out exemptions for Canada and Mexico pending progress on NAFTA. Then the president trumpeted a trade deal with South Korea that imposed quotas on steel imports but almost immediately said that deal was conditional upon South Korean help in dealing with North Korea.

Trump threatened over $50 billion of Section 301 penalties on China for theft of U.S. intellectual property, but within days China and the U.S. calmed market fears by announcing plans for bilateral trade negotiations.

So is it really a trade war, or just a set of negotiating tactics?

I believe the trade war scenario is more likely.

Meanwhile, Trump will wait to see if China is willing to make concessions in the intellectual property area. If not, he can easily double or triple that $60 billion figure.

My take is that this trade war is not going away anytime soon. It will last for years, get much worse and be a major headwind for stock prices (click here for an urgent trade war update).

But I admit that Trump has left enough wiggle room to indicate he could back off the trade wars if he can exact enough concessions from China and the NAFTA countries.

Geopolitics are another on-again, off-again market driver. A strong case can be made for a coming war with North Korea.

Decades of North Korean development of nuclear weapons and ballistic missiles and a rapid increase in the operational tempo of tests in the past year reveal that North Korea is determined to build an arsenal of nuclear-armed ICBMs that pose an existential threat to the U.S.

For its part, the U.S. has made it clear that North Korea will not be allowed to acquire or possess these weapons. These two views are irreconcilable and point toward war.

At the same time, a rapid round of diplomacy involving summits between North and South Korea, China and North Korea and Japan and North Korea, all leading to a summit between Donald Trump and Kim Jong Un, point to a possible peaceful resolution of the impasse.

The final factor that is confounding markets is the potential for regulation of technology. Investors do not need to be reminded of the outsized impact of the FAANG stocks (Facebook, Apple, Amazon, Netflix and Google) on markets overall and the Nasdaq-100 in particular.

Suddenly, Facebook is facing scrutiny because of misuse of personal customer data and for acting as an accessory to Russian meddling in U.S. elections. Amazon is under the gun on possible antitrust grounds, alleged government subsidies for shipping and Trump’s visceral dislike for the “fake news” Washington Post owned by Amazon founder Jeff Bezos.

There will certainly be congressional hearings on these matters and probably some legislation. Will Silicon Valley lobbyists dilute the legislation? Will antitrust allegations go up in smoke? Or will populist outrage with the tech giants lead to a sea change and aggressive enforcement as we saw with the Rockefeller trusts in the early 1990s?

The correct answer is that no one knows. This will be a battle between corporate lobbyists and populist outrage. Usually the lobbyists win, but this time may be different.

None of these four issues will be resolved quickly. It may take six months of data before the Fed realizes the economy is weak despite tax cuts or before growth bears throw in the towel. 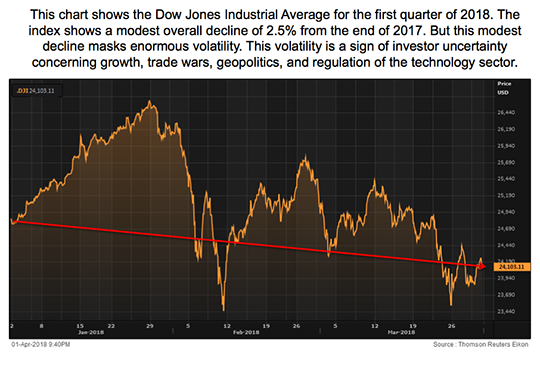 Trade wars usually play out over years, not months. If Kim Jong Un wants peace, we should know fairly soon. If not, the countdown clock to war, currently on pause, will resume ticking.

The hearings and legislative process involving technology regulation will also take a year or more to play out. Members of Congress like to milk these issues for campaign contributions from both sides before resolving them, so don’t expect quick results here.

The problem for investors is they have to wake up every day and commit capital whether they know the answers on these issues or not.

If growth is strong, trade wars fizzle, North Korea wants peace and the tech lobbyists prevail, then Dow 30,000 is in sight.

If growth is weak, trade wars escalate, North Korea is dealing in bad faith and popular outrage hamstrings the tech giants, then Dow 20,000 is in the cards.

Of course, other combinations of these factors could emerge. Mixed results are entirely possible; that’s where the 16-path decision tree comes in.

My estimate is that the less optimistic, more bearish path is most likely. But it’s unwise to put a stake in the ground on any particular outcome. The best approach is to assess incoming data in relation to the bearish hypothesis and update accordingly. It’s a time to be nimble.

One thing is certain: Market volatility is not going away soon, because these issues will not be resolved soon.