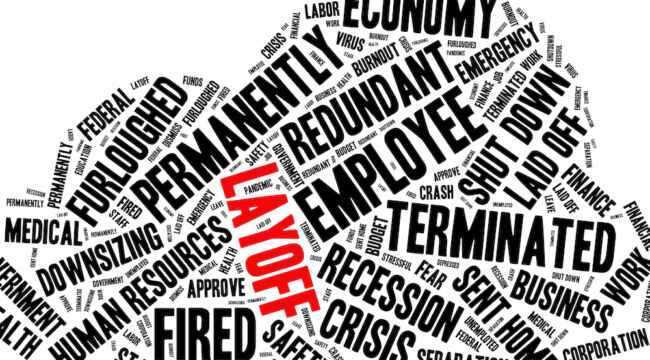 Rickards: The Layoffs Are Just Beginning

UNEMPLOYMENT skyrocketed in March and April, during the worst stage of the pandemic and the lockdowns that followed.

The unemployment rate approached 15% in April and total initial claims for unemployment benefits exceeded 59 million between March and August.

This was the worst episode of unemployment since The Great Depression in the early 1930s.

Things have improved since spring. Unemployment fell to about 11% by July and even further in the August unemployment figures released last Friday.

Does this mean the worst is over and the economy is recovering quickly? Not exactly.

Unemployment would have been much worse in April and May but for the Payroll Protection Plan enacted by Congress.

This Plan appropriated almost $1 trillion in easy-to-get loans for small-and-medium sized businesses. The loans would be forgiven if the proceeds were used to maintain payrolls for two-and-one-half months or to pay rent.

This program acted as a kind of bridge loan from May to July to keep employees on the payroll. It worked. But now, those funds have run out and the lockdowns continue in many parts of the economy.

Businesses that were expecting a reopening and a V-shaped recovery have found that the reopenings have been delayed by new lockdowns and that the recovery is real but weak.

We’re starting to see a second wave of layoffs as the Payroll Protection Plan money runs out and the economy doesn’t recover as hoped.

Meanwhile, states and cities are also planning huge layoffs in the coming weeks as tax revenues dry up and the costs of riots and looting begin to add up.

Putting all of this together reveals that unemployment may actually rise, starting now, after declining from May through August.

Digging Out of a Deep Hole

The reality is, the economy’s in very bad shape. The idea that we’re going to bounce back out of this with all this pent up demand is nonsense. The data is already indicating we’re in a recovery, yes. But if you fall into a 50-foot hole and climb 10 feet up, you’re still 40 feet in the hole.

And that’s if things don’t get worse from here. But they could, especially if we get a deadly second wave of the virus.

We’ve climbed 10 feet out of the hole. Unfortunately, we could find ourselves right back at the bottom before too long.

Of course, we can’t talk about the economy without mentioning the Fed…

In a highly publicized speech on August 27, 2020 at the Federal Reserve Jackson Hole Conference, Fed Chair Jay Powell declared a new form of monetary policy for the Fed.

For the past 20 years, the Fed has pursued a policy of targeting 2% inflation. They have generally failed miserably at this; inflation has only hit 2% briefly since 2007 and has typically been closer to 1.5% than the 2% target.

Now, the Fed will target average inflation of 2%. This means that if inflation is under 2% for a sustained period (as it has been), then inflation can run above 2% so that the average of the over and under periods will come close to the target.

But there are numerous flaws in this approach, which the Fed does not understand.

The first problem is that if the Fed cannot achieve 2% inflation, why on earth do they believe they can achieve 2.5% inflation to hit the average of 2%? It’s basically meaningless.

Between 2008 and 2014, the Fed created trillions of dollars through quantitative easing (which actually seems like small potatoes compared to what we’re seeing now).

Many analysts sounded the alarm about “inflation” as the inevitable consequence of all that excessive money printing by the Fed. It seemed like a perfectly reasonable warning at the time.

But despite all the fears, nothing bad happened.

Inflation actually fell; there was no serious inflation threat. Interest rates fell. There was no “bond bubble” or rout in the bond market.

That’s why there’s so little resistance to all the monetary programs we’re seeing now.

It’s like the boy who cried wolf. Analysts cried wolf about inflation during the last crisis, but the wolf never materialized. Why should we listen to them now?

It’s About the Velocity, Stupid

As I’ve argued before, and can’t state strongly enough:

Inflation is not caused by money printing alone. It’s caused by the velocity, or turnover, of money.

Velocity is a psychological phenomenon that has nothing to do with the Fed, (in fact, the Fed doesn’t even understand how it works).

The Fed can “print” all the money in the world. But if people don’t actually spend it; but save it instead, it won’t create inflation because there’s no velocity.

And now, because of high unemployment and failing businesses, people are not spending money even when the economy reopens. They’re saving instead.

Now, savings in general is positive. A high savings rate can be good in the long-run, but it kills consumption in the short-run.

It means little money velocity. It means that not much money is turning over.

So we’re looking at disinflation and deflation for now, despite all the money creation we’re seeing now.

But that doesn’t mean inflation is dead. The inflation will come, just not yet…

Inflation will come when people lose confidence in the dollar and suddenly dump dollars for any hard assets they can find.

Money velocity will accelerate, but it won’t be into consumer goods. It’ll be into hard assets that hold their value over time, gold in particular.

In other words, the best leading indicator of inflation won’t be found in the grocery store or at the gas pump.

It’ll be found in the dollar price of gold.

Clearly, the Fed does not know how to cause inflation. Just saying they have a higher target does nothing actually to hit the target.

“What’s So Great About 2% Inflation?”

The second problem with the Fed’s new inflation policy is: What’s so great about 2% inflation?

That level of inflation cuts the value of the dollar in half in 35 years, and in half again in another 35 years. Your dollar would lose 75% of its value in an average lifetime.

If inflation is only 3%, the 75% dollar devaluation happens in about 45-years; an average career span.

Zero percent inflation is the only appropriate target. And, targeting average inflation using past mistakes as a baseline is looking in the rearview mirror.

Inflation should be targeted on a going-forward basis only and not have to drag with it the fruits of prior blunders.

It’s been clear for decades that the Fed has no idea what it is doing when it comes to monetary policy.

This new announcement by Jay Powell just makes their confusion even more obvious.

The safe havens in the present slow-growth, high unemployment environment are cash, Treasury notes and gold.

Of course, gold is also the asset to own when inflation does arrive.

When gold pushes past $2,000 per ounce toward $3,000 per ounce, that’s your signal that inflation in the price of everything else is not far behind.