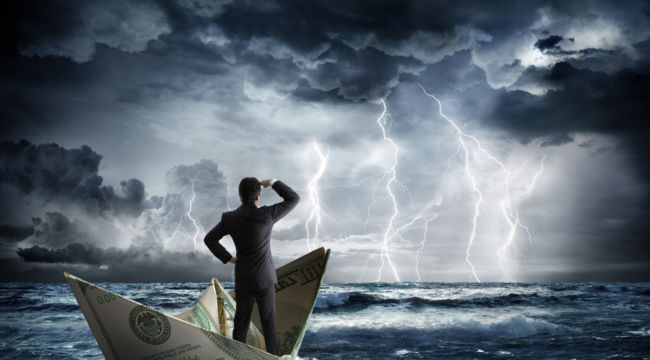 People often refer to the “perfect storm.” A perfect storm is generally understood as two or more events that are independent but converge to produce an outcome much worse than either event alone.

The term is an overused cliché, and as a writer I avoid clichés whenever possible. But though rare, perfect storms do exist. The most common example is the devastating 1991 storm popularized by the book and movie of the same name, although it was initially known as the “Halloween storm.”

Do metaphorical perfect storms happen in politics and capital markets?

The answer is yes, provided the conditions of the perfect storm definition are satisfied. The multiple events that make up the true perfect storm must be independent and rare and come to converge in an almost impossible way.

Unfortunately, a political and market perfect storm is now on the way and may strike as early as Halloween 2019, marking a new “Halloween storm.” Get ready.

Today I’ll be discussing the components making up this perfect storm, and how I see them all coming together at the same time.

In my 40-plus years in banking and capital markets, I have lived through a number of financial fiascos that arguably qualify as perfect storms. Here’s a partial list:

I was not just a bystander at these events. From 1977–85, I worked at Citibank and dealt with inflation, currencies and Latin America from a front-row seat.

From 1985–93 I worked for a major government bond dealer that financed S&Ls and traded their mortgages.

From 1994–99, I was at LTCM and dealt in all the major international markets. I negotiated the LTCM rescue by Wall Street in September 1998.

That’s a lot of action for one career, but it also makes the point that financial perfect storms happen more frequently than standard models expect.

Here’s what I learned: Every one of these episodes was preceded by mass complacency or euphoria.

Before the Arab oil embargo, we expected cheap oil forever. Before the Latin American debt crisis, countries like Brazil and Argentina were “the land of the future.”

No one worried about a stock market crash in 1987 because we had “portfolio insurance.” The S&Ls could not get in trouble because they had FSLIC (Federal Savings and Loan Insurance Corp.) insurance.

Mortgages were solid because we had never seen a simultaneous nationwide decline in home values. Lehman Bros. was “too big to fail.” AIG was the Rock of Gibraltar.

In short, the fiascoes I witnessed were “not supposed to happen.” They all did. The worst panics are always preceded by a sense that nothing can go wrong.

We are there again. Stocks are approaching all-time highs again. The bond bust hasn’t happened. Mortgage interest rates are near the lows of the early 1960s. Exchange rate volatility is low.

Unemployment is at 50-year lows. Real wages are rising (at least a little). There are more job openings than job seekers. ISIS is defeated. Brexit is on indefinite hold.

It’s all good. What, me worry?

I saw a recent poll asking investors when they thought a market crash might happen. Something like 80% of the respondents answered not anytime soon.

I cannot imagine a better setup for catastrophe. No one ever sees disaster coming. That’s the point.

I believe a perfect storm is coming. It’s hard to foresee the full magnitude of it, but it will likely be dramatic. It will have a major impact on markets. How it impacts you depends on how far in advance you see it coming.

What are the three specific elements of the new perfect storm I see coming for markets? Read on.