Most of you are familiar with the book “Rich Dad, Poor Dad.”

Mainly because it’s littered throughout bookstores and airports all over the world.

The book and its author, Robert Kiyosaki, became immensely popular in the late 1990s after he appeared on Oprah, kissed her ring, and received her blessing.

“Rich Dad, Poor Dad” tells the story of two dads: the author’s fiscally unstable father and the multimillionaire father of his friend.

The gist of Kiyosaki’s narrative is that rich people like his friend’s dad pass on valuable financial wisdom to their kids… and non-rich people don’t.

The masses fell for this supposed “rich” wisdom hook, line and sinker. And Kiyosaki’s book became a juggernaut.

It stayed on the New York Times bestseller list for more than six years.

And Amazon.com lists it as the #1 personal finance book of all time, with 26 million copies.

It seems all you have to do is follow “Rich Dad’s” advice, click your heels and “poof,” you’ll be rich.

So who am I to question Oprah’s seal of approval… or dare challenge the “Rich Dad” fantasy?

Because I know if you followed one particular piece of Kiyosaki’s advice, your finances won’t be like a “Rich Dad” – more like a “Poor Fool.”

What was it in Kiyosaki’s background that qualified him as a moneymaking expert?

From what I can gather, he started a company that made Velcro wallets… until it went bankrupt. (“Rich Dad’s” advice really paid off there.)

He also was an Amway salesman. You know, the multi-level marketing company that for years has been accused of being a pyramid scheme

Then Kiyosaki discovered the mysterious “Rich Dad,” whose wisdom he rode to fame and fortune… except that this “Dad” likely never existed.

You know, the wizard behind the curtain, but in this case there is no wizard… or even a curtain.

The point is that Kiyosaki is a 100% manufactured media creation… the product of PR and marketing machines to lure the gullible.

He doesn’t know any more than the next guy, as I’m about to show you.

In October 2011, Kiyosaki made a strong recommendation to buy silver.

The metal had already shot higher after the Fed started QE in 2009. But Kiyosaki said it was still a “bargain” in late 2011… and “the best investment of all.”

At the time, the spot price for silver was roughly $32 an ounce.

Many believed silver had to go higher because the fundamentals said that’s what should happen when the Fed rigs the currency.

But what Kiyosaki didn’t know at the time was that silver’s price trend had already changed.

And for savvy investors, like trend followers, that’s the only thing that matters.

Instead, it relies on the only thing any investor could know at the time: the price action. 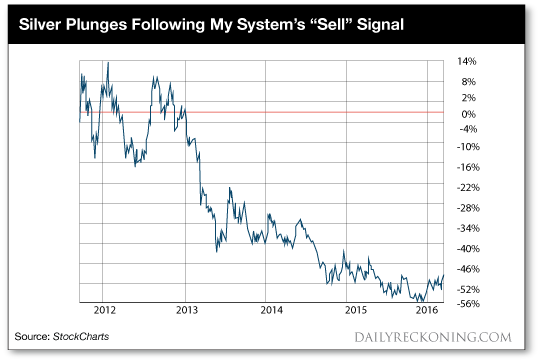 After my system triggered a “sell” signal, silver dropped 56%.

I couldn’t know the precise fall in silver that followed, but its price action was clearly trending south.

Those that didn’t have a strategy to sell silver when the trend turned got obliterated.

Which goes to show that the market doesn’t care what Kiyosaki or any of his dads has to say.

When a price trends in one direction, you either get on board on the right side of it, or you get killed.

Said another way: You cease being “Rich Dad” and become “Mindless, Broke Dad.”

My System Triggers a Buy Signal on Silver

So what’s the right side of the trend in silver now?

What is the price action telling us?

Last month my system triggered a “buy” signal on silver.

This means this could be the beginning of a new uptrend in silver.

We’ll wait and see with our stop-losses in place.

Now, the easiest way to trade Silver is through the iShares Silver Trust (SLV). You can set a stop loss at 14.82.

That’s how you should trade the markets. Follow a systematic trend following approach… and let the price trend lead you.

Please send your comments to coveluncensored@agorafinancial.com. If anyone has a man crush on Kiyosaki and wants to prove me wrong, bring it on.