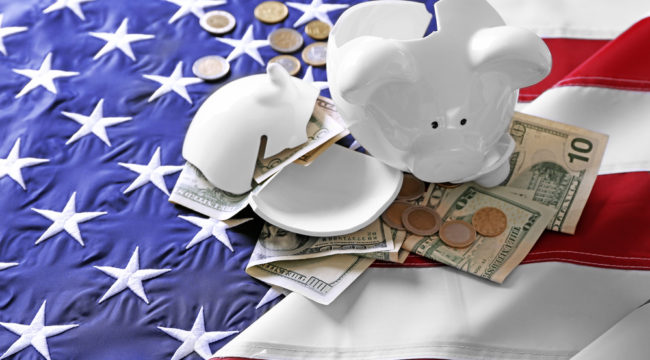 There is absolutely nothing wrong with America’s finances that a miracle couldn’t fix… as the great man said.

A somehow appropriate $666 billion — over $100 billion higher than estimated.

At just under $4 trillion, this year’s budget wrote a new chapter in government extravagance.

Next year’s budget will write another…

It was actually the Senate’s budget. The House passed it to clear the road for Trump’s tax plan.

The entire affair is… complicated.

The House on Thursday narrowly approved a Senate version of the 2018 federal budget, clearing the way for the GOP-controlled Senate to pass a massive set of tax cuts later this year…

By passing the Senate version of the budget, House Republicans kick-started the reconciliation process, a window during which the Senate can pass legislation with only a simple majority instead of the 60-vote supermajority typically needed to end debate and move a bill to a vote.

The Committee for a Responsible Federal Budget — no laughter please — estimates the tax plan could add more than $2.2 trillion to the $20 trillion national debt.

The national debt, as a percentage of GDP, has nearly doubled over the past 17 years.

For your viewing pleasure, CBO’s projected trajectory of the national debt as a percentage of GDP: 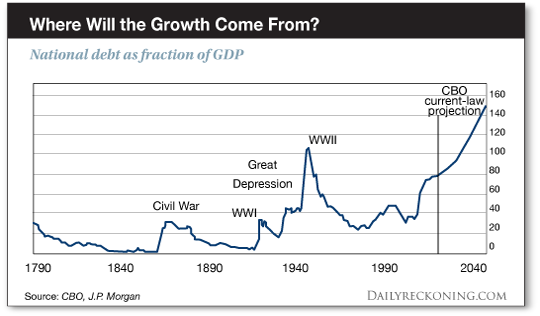 If you accept the CBO at its word, mandatory spending — including these budget-busters and a few others — will constitute 78% of federal spending by 2026.

That leaves only 22 cents per dollar for education, science, transportation and a hundred other things… to say nothing of defense.

On that note, we learned yesterday that Social Security spending exceeded $1 trillion this year for the first time ever — 76% more than Uncle Samuel spent on defense (or offense).

The federal government, says he, is a “gigantic insurance company (with a sideline business in national defense and homeland security).”

Much truth is spoken in jest.

With the spirit of doom upon us today, let us sink further into the mire…

According to no less an authority than the United States Treasury, projected tax revenues to fund Social Security and Medicare over the next 75 years fall $46.7 trillion short.

But even these $46.7 trillion of unfunded liabilities may tell a mere fraction of America’s true indebtedness…

Over the next 75 years, this Cassandra projects America’s true debt at an intergalactic $210 trillion.

Kotlikoff, with tears in his voice:

If you add up all the promises that have been made for spending obligations, including defense expenditures, and you subtract all the taxes that we expect to collect, the difference is $210 trillion. That’s the fiscal gap. That’s our true indebtedness.

Kind heaven — could our fair land really be $210 trillion in red one day?

On days such as this, when our hopes for America crash upon the shoals of actuarial mathematics and we wonder why we even bother… our thoughts turn to author Robert Benchley…

Benchley sat at his typewriter one day to tackle a vexing subject.

He opened his piece with “The”… when the full weight of his burden collapsed upon his shoulders.

He abandoned his typewriter in frustration.

He returned shortly thereafter and resumed the task anew…

With only “The” to work with… Benchley immediately knocked out the article, presented here in its entirety: