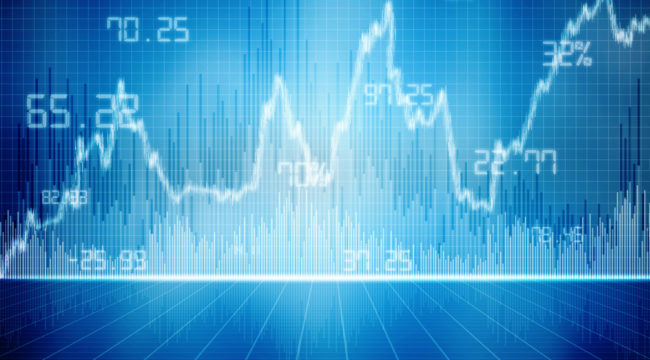 In August — if the gods are kind — this bull market will become the longest in modern history.

But how much longer can the show run?

And how much higher can the S&P rise before the black curtain falls?

Today we go crystal-gazing… steal a forbidden glimpse of the future… and report a bizarre vision.

The Dow Jones ended the day down 287 points

The Big Board is thus on track for its longest streak of negative sessions in a year’s time.

For the official explanation, we needn’t look far…

Yesterday the president announced plans to impose a 10% tariff on an additional $200 billion of Chinese goods.

Yesterday’s démarche followed hard upon Friday’s action, when both countries heaved tariffs against the other.

And today markets are girding for the worst.

This is moving beyond “tit-for-tat” levels, and predictably, investors are running for cover under the haven umbrellas, as global equity indexes are crumbling under the weight of an escalating trade war.

The clearest sign yet that these tit-for-tat measures will continue to escalate until there are some serious economic consequences on the individual countries and to global sentiment.

We are in no authority to bring professional judgment into question.

Besides… it reinforces our curmudgeonly bias.

But let us revisit briefly yesterday’s reckoning… and advice from the legendary Nathan Mayer Rothschild:

“Buy when the cannons are firing, and sell when the trumpets are blowing.”

The cannons are in full roar today… and the triumphant trumpets have gone quiet.

Is it time to heed the great Rothschild’s counsel — and buy?

If your name is Kevin Matras, the answer is clear.

Rise above the current din of battle, he says… and face the bright horizon.

The Trump tax cuts have entered effect and are wending their way through the economy.

The plan is also bringing home hordes of corporate cash from overseas havens (estimated at over $2.5 trillion).

The United States is therefore becoming one of the business-friendliest nations on Earth, a magnet for investment.

Thus the stage is set for a beautiful run of economic achievement, says Matras:

All of this economic activity means more new jobs. And with more jobs comes a stronger consumer, which means more consumer spending. That, of course, is good for business, and the whole virtuous circle is reinforced.

These tax cuts alone are expected to usher in decades of new prosperity.

And it should be noted that these aren’t one-time stimulus packages that provide only temporary incentives and modest economic benefits.

We’re talking about transformational growth due to long-term structural changes in how companies do business in America.

The rising thermals of economic growth will in turn lift the stock market to wondrous new heights, says Matras.

But how wondrous? And what heights?

Where exactly does this Pollyanna believe the S&P will be in five years?

The current expansion is already some 109 months old.

And it is a sad affair by historical standards.

Post-recession growth has advanced inch by agonizing inch — unlike post-recessions past when growth averaged a galloping 3–4%.

True, says Matras, but that is precisely the point:

It is also more intense than the present cycle.

In turn, says Matras, excesses tend to accumulate at a much faster rate.

And these excesses must then be wrung from the system.

The typical post-recession recovery is therefore stronger — but shorter.

The present recovery hasn’t come within miles of the 3–4% growth rate of past recoveries.

It is longer than average — but also much weaker.

And so the normal excesses have not accumulated.

Over the next five years, this fellow argues the tax cuts will finally raise the recovery to the historical 3% or 4%.

Only then — in five years perhaps — will any accumulated excesses have to be addressed.

The present recovery could therefore extend for years… if the theory holds.

So what happens to the S&P if economic growth doubles over the next five years?

According to this Matras fellow…

The S&P will double over the next five years.

It’s not hard to imagine that if GDP were to double, or more… earnings would soar, and stocks could easily gain another 100% over the next five years, and likely a whole lot more!

Incidentally… a market doubling would also take the Dow Jones to 50,000.

Stocks are already inflated to a bubbly extreme.

And to double from here?

Pack this fellow off to Bedlam!

Here is his counter:

The stock market has averaged a 14.9% annual return since 2009 — despite the punchless GDP growth.

To double over the next five years, the S&P need only match that 14.9% annual rate.

If GDP doubles over that frame… is 14.9% completely out of court?

And Matras believes the S&P can easily match that 582% within three years:

“We’re only 3.3 years away from surpassing that. And I think we most certainly will.”

We’ve written before about a “melt-up”:

That period of delirious, incandescent glory stocks enjoy… before ultimately melting down.

If the tax cuts stimulate as this fellow expects… could it double over the next five?

It would appear possible.

And there is many a slip ‘twixt the cup and the lip, as the old saying has it.

A trade war, for example.

Or overtightening by the Fed… or a war… or something else entirely unforeseen.

But we’ve been waiting for that slip so long…

Why should we be surprised to wait another five years?