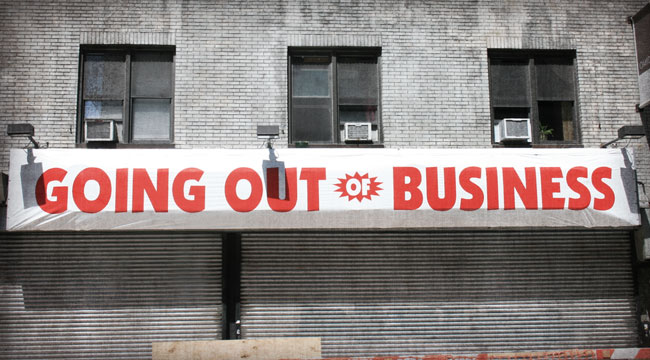 Remember When… 133,459 Bankruptcies Were Filed in a Single Month?

Not only will you be shocked at just how quickly time passes,  but you can see what we predicted correctly, what we missed the mark on, and how history does, in fact, have a habit of rhyming.

Today there’s nothing to report on from ten years ago… so, we turn back the clock by a half-decade…

Back in 2009, India purchased 200 tons of gold from the International Monetary Fund. Analysts thought China would follow suit. When they didn’t – despite swirling rumors of a 191 tonne purchase – a lot of people were left scratching their heads…

The answer to this riddle, reported Rocky Vega, was the simple fact that China was the world’s leading producer of gold, so if China’s central bank chose to buy gold, it wouldn’t need to turn to the IMF headquarters in Washington, D.C.

Plus, China had been careful about putting its enormous reserves into any one particular asset – except for Treasuries, naturally! Then and now, China continues to invest heavily in dollar-denominated assets in order to maintain the yuan’s dollar peg — but it’s also still building up its gold reserves. According to Jim Rickards, in fact, the U.S. is helping them do it.

It was a regular Friday jobs report. Addison Wiggin called BS on the BLS (Bureau of Labor Statistics). Like putting lipstick on a pig, at first glance the numbers don’t look so bad. But when you lift up the blouse, there’s no denying the Miss Piggy resemblance.

Here’s what the situation really looked like five years ago. To quote Addison;

Since this article was written, the overall unemployment rate has gone steadily down, according to the Bureau of Labor Statistics.  Labor force participation has too so…  as with government statistics, take it with a grain — nay, a handful — of salt.

“With Ongoing Joblessness Bankruptcy Filings Near a 5-Year High”

Rocky Vega shared a report from Reuters about how critical jobs growth is for improving an economy.

At the time of writing, U.S. bankruptcy filing rates were nearing a five-year high, with 133,459 bankruptcy petitions filed in May of 2010, 10% more than the year prior. There were difficulties in the labor market, companies weren’t hiring, and there was too little work to go around. It was hard to see how the economy was “improving” at all. And it still is today…

Flash forward a bit to June of last year (2014), when bankruptcy filings in the United States totaled 73,816. Surely an improvement from the six figures seen in 2010, but upwards of 70k bankruptcies in one month isn’t exactly something to be proud of.

Dan Amoss shared five signature traits that can predict whether a stock is overvalued or not. Since the information is evergreen, we’ll publish them for you…

“An accurate definition of an “expensive stock” is a stock that has increased far higher than the fundamentals justify.

Some bull markets, like the bull market in oil stocks, are justified. Earnings and cash flow have risen as fast, or faster, than the stocks.

You did not want to be shorting these stocks as long as the psychological mania and momentum held strong. Expensive stocks can always get more expensive.  But make no mistake, the tide will eventually turn…and that’s when you strike.”

“Obviously, companies need customers to survive.  Companies that are suffering a contraction in their customer base will experience declining sales, earnings, and even balance sheet erosion. But the Street may often fail to recognize it, choosing to value a particular stock by assuming past sales and earnings trends will continue indefinitely into the future.

An example is this would be USG Corp., a leading manufacturer of Sheetrock for use in new home construction.  It’s a low-cost producer and has a good management team. It’s owned partly by Warren Buffett’s Berkshire Hathaway. As a result, it has long been a favorite of value investors.”

“Some executives are “serial acquirers.” They care more about building a personal empire than building shareholder value. They have the bad habit of constantly diluting shareholders with secondary stock issuances.

A classic example is Tyco Intl. in the late 1990s, when Dennis Kozlowski ran it. Kozlowski was a sweet talker who overpaid for a hodgepodge of industrial companies, yet he successfully marketed this conglomerate as “the next GE.”

That is, until early 2002. That’s when the seams fell apart as the Enron scandal and a recession combined to shed light on the real value of the hundreds of businesses Kozlowski had rolled up. All those acquisitions destroyed value because the negative of constant stock dilution more than offset any positive gained from the acquired companies.

Of course, expansion isn’t a bad thing. Some of the warning signs to look for are acquisitions of companies unrelated to the business…paying a stiff premium for the acquisition…or acquiring a company that’s on a downward skid.”

“Companies work hard to make their earnings look as good as possible. But sometimes their number boosting schemes go too far.

How was this wave of acquisitions treated on Tyco’s balance sheet? Whenever an acquiring company pays a premium above the target company’s book value, the difference usually ends up as “goodwill,” an intangible asset on the acquirer’s balance sheet. Unlike physical assets such as plants, goodwill and other intangibles are hard to value and can, in fact, be worthless. Tyco’s intangible assets swelled from $6.4 billion in 1998 to $35.3 billion in 2001.

“Bootstrapping” (and other merger-related accounting techniques) is just one of the many accounting red flags we’ll look for in the Strategic Short Report. Others include capitalizing expenses, channel stuffing, related party transactions, and using off-balance sheet accounting to hide the true financial picture.”

Companies often offer stock options as an employment incentive — promising shares of the company in lieu of money. There’s nothing wrong with that… in fact, giving staff a stake in the company is a perfect way to make sure it acts in the company’s best interests.

But sometimes a company gets a little too generous with its options. It hands them out like candy, or backdates them to make them more attractive. Either way, it dilutes shareholder value.

Take the case of Broadcom. Back in 2000, the company issued many options when the stock was above a split-adjusted $100 per share. But when the market hit bottom in 2002–2003 and Broadcom’s shares fell sharply, those options were worthless.  So to make its employees happy, Broadcom repriced those options.

The result was a dilution of shareholder value and, ultimately, a lower stock price.

Figuring out if a company is playing games with its options can be tricky. But once you see the warning signs, you know you’ve found a company ripe for a fall.

Foreclosures were the topic du jour five years to the day. Dan Amoss clocked in a double-header for the day. He reported and we quote:

Foreclosure activity is crucial to the outlook for bank earnings. Mortgage losses will continue to be a growing problem for bank stocks in 2010.

Since the suspension of mark-to-market accounting, banks have gained much more control over timing their credit losses, but they cannot get away with completely ignoring them when the evidence is overwhelming that credit losses are real.

Bank repossessions and notices of default were up, and the pool of “distressed” housing fell.

Dan believed that this backlog of foreclosures had built up like water behind a dam, and once that dam inevitably gives way, the market would be shocked at how quickly the foreclosure numbers burst upwards.

Lo and behold… according to RealtyTrac, foreclosures have nearly tripled since Dan made his call five years ago. Bravo!

Join us again tomorrow for another editorial glimpse back in time.