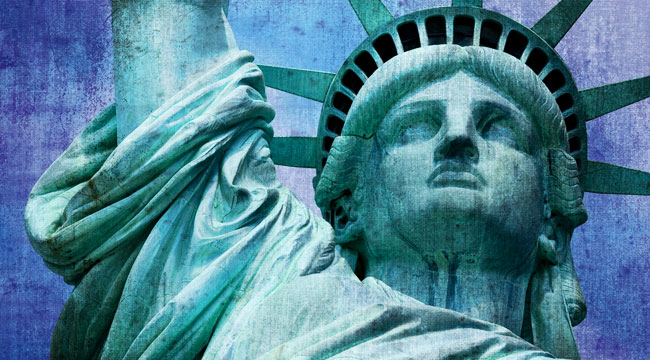 Relaxed immigration correlates with a thriving America. Few remember that most of our grandparents (including those of this columnist) who immigrated to America did so freely. They just showed up and came right in without confronting a crazy quilt of laws or phalanx of DHS agents. Relaxed immigration is part and parcel with economic growth.

It was not until the 1920s that quantitative immigration laws were adopted. Previously, only “illiterates, persons of psychopathic inferiority, men as well as women entering for immoral purposes, alcoholics, stowaways, and vagrants” (and, shamefully and to our detriment, Chinese and Japanese) were excluded.

In the context of this policy immortalized by Emma Lazarus as “Give me your tired, your poor,/ Your huddled masses yearning to breathe free,/ The wretched refuse of your teeming shore./ Send these, the homeless, tempest-tost to me,/ I lift my lamp beside the golden door,” America thrived.

Then tribal, anti-classical, political forces contrived to apply restrictions motivated at least partly based on Malthusian theory. This theory, anathema to supply siders, claims that there just isn’t enough wealth to go around and immigrants would dilute the prosperity of those already here.

That’s nonsense. The sovereign states and dependent territories with the highest population density in the world — Macau, Monaco, Singapore, and Hong Kong — are among the most prosperous in the world. Some of the least populous states, such as Sudan, Mali, and Chad, are among the most destitute. The correlation between population density and prosperity is not exact. Yet it clearly is tight enough to give lie to the claim that population growth (whether through fertility or immigration) is, in the context of political and economic freedom, anything other than a great blessing.

“The world’s problem is not too many people, but lack of political and economic freedom. Powerful evidence comes from pairs of countries that had the same culture and history and much the same standard of living when they split apart after World War II — East and West Germany, North and South Korea, Taiwan and China. In each case, the centrally planned communist country began with less population ‘pressure,’ as measured by density per square kilometer, than did the market-directed economy. And the communist and noncommunist countries also shared much the same birth rates. But the market-directed economies performed much better economically than the centrally planned economies. This powerful demonstration cuts the ground from under population growth as a likely explanation of poor economic performance.”

People as resource is part of an integrated classical liberal worldview. Another great classical thinker, the late professor Melchior Palyi, formerly chief economist of Deutsche Bank, wrote in The Twilight of Gold 1914-1936: Myths and Realities about a classical era, now mostly forgotten, that was “a golden age.” The era’s leaders offered an integrated worldview, extending to monetary, financial, and… immigration policy. How did it work out?

“Rising living standards of a rapidly growing world population, tremendous capital accumulation, accelerated technological progress, a vastly broadening area of well-organized international trade and finance, of political democracy and individual freedom — all these were the hallmarks of growth in the century between Waterloo and Sarajevo, and of its second half in particular. Toward the end of that period, and for a while thereafter, there was little doubt in the minds of most contemporary observers that such phenomenal developments as the skyrocketing of foreign long-term investments from under $6 billion in 1864 to over $70 billion just before World War I was closely related to the basic monetary institution of the age, the gold standard…

“The meaning of the gold standard — with its unrestrained and uncontrolled private ownership of gold — cannot be appreciated in isolation from the institutional and psychological background that characterized the civilized world in the decades before 1914. ‘The outstanding feature’ of that period was the unity of the economic world, as has not been achieved at any other time.”

The gold standard was not the only hallmark of this epoch:

“There was freedom of travel without passports, freedom of migration, and freedom from exchange control and other monetary restrictions. Citizenship was freely granted to immigrants….”

The Republican Party aspires to the status of the party of economic growth. By branding those who have moved here outside the unenforced laws of a broken immigration system as “illegals” — and opposing a redemptive path to citizenship — some Republicans have, willy-nilly, aligned against the policy most conducive to equitable prosperity: comprehensive reform.

Comprehensive immigration reform is not just about interests, prosperity. It’s also about values. Opposition to finding a path to citizenship also is rooted in a colossal misunderstanding of the values of these immigrants: conservative ones.

Many Republicans have little social connection or rapport with Latinos (and vice versa). Republicans from states with high-density Latino populations, such as Texas, are less prone to misunderstanding. But too many Republicans mistake Latinos as intrinsically Democratic voters. Of course, they surely will become so if repudiated and insulted by the GOP.

This is a big mistake. The worldview of Hispanics trends much closer to a conservative vision than to a progressive one. Mexico’s “declaration of independence” from Spain, celebrated on Sept. 15, reads like a tea party manifesto. The speech by the Mexican Jefferson, Father Miguel Hidalgo, is as close to the heart of our Mexican brothers as is the Declaration of Independence is to the people of the United States:

“My children: A new dispensation comes to us today. Will you receive it? Will you free yourselves? Will you recover the lands stolen 300 years ago from your forefathers by the hated Spaniards? We must act at once… Will you defend your religion and your rights as true patriots? Long live our Lady of Guadalupe! Death to bad government!”

“Will you defend your religion and your rights as true patriots?” “Death to bad government?” These are sentiments that would be branded by the Department of Homeland Security as “Extreme Right-Wing,” defined in its “Hot Spots of Terrorism and Other Crimes in the United States, 1970-2008” as “groups that believe that one’s personal and/or national ‘way of life’ is under attack and… that the threat is imminent (for some the threat is from a specific ethnic, racial, or religious group), and believe in the need to be prepared for an attack… by participating in paramilitary preparations and training. Groups may also be fiercely nationalistic… suspicious of centralized federal authority, reverent of individual liberty….”

The words of the Grito were spoken, as were the words of the Declaration of Independence written, at the moment of actual insurrection. Resoundingly, the core values of human dignity and liberty persist. About half of our Hispanic population derives from Mexico. And Hispanics from south of Mexico tend very much to share these values. Let us now praise, among others, El Libertador, Simón Bolívar.

As I’ve written elsewhere, “The millions of Hispanics in America make up an invisible conservative electoral El Dorado, ‘City of Gold,’ enriching American society. They are ‘imprisoned lighting’ that can, once unleashed, help restore America to greatness.”

Immigration reform now migrates from the Senate to the House. Support for such reform, absolutely including a path to earned citizenship by the hardworking and otherwise law-abiding, is a stand for the American principles of dignity, liberty, and prosperity. These are three transcendent conservative values. It is baffling to me, a proud, fiercely conservative tea partier, that so many of my highly esteemed conservative colleagues seek to delegitimize the conservative reform efforts of good conservatives like Sen. Marco Rubio.

Comprehensive immigration reform is a stand for dignity, liberty, and prosperity. It is part and parcel of a stronger conservative movement… and a golden age for America and the world. It is not merely the right thing to do. It is the Right thing to do.