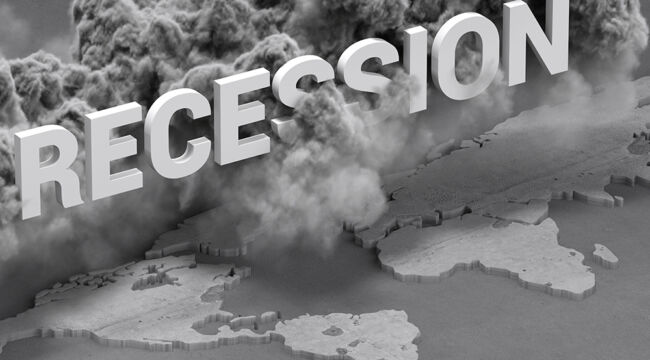 It is (un)official — the United States economy has descended into recession.

This, after first-quarter GDP contracted at a 1.6% annualized pace.

A recession is generally defined as two consecutive quarters of economic contraction. And so there you are.

Experts being experts, most polled economists had projected second-quarter growth — if only minimal growth.

Not for the first time we wonder: How can a humble, disreputable publication as ours continually cough out a truer forecast than a body of professional economists?

Yet it makes no nevermind.

Of course, the American economy has not officially entered recession. The preliminary verdict will only be affirmed if the National Bureau of Economic Research stamps it valid.

And these gentlemen and ladies of the jury often deliberate for months and months — at times longer — before pronouncing verdict.

The administration has already voiced a loud objection. They retort that the economy is not in recession at all, that the prosecutor’s case is riddled through with holes.

For example, defense counsel Janet Yellen vaults from her seat to plead that:

Most economists and most Americans have a similar definition of recession — substantial job losses and mass layoffs, businesses shutting down, private-sector activity slowing considerably, family budgets under immense strain. In sum, a broad-based weakening of our economy. That is not what we’re seeing right now when you look at the economy. Job creation is continuing; household finances remain strong. Consumers are spending and businesses are growing.

I do not think the U.S. is currently in a recession and the reason is there are just too many areas of the economy that are performing too well.

Lead counsel Joseph Biden… upon snapping to after a lengthy snooze… and wiping the drool from his necktie… mumbles that:

Coming off of last year’s historic economic growth — and regaining all the private-sector jobs lost during the pandemic crisis — it’s no surprise that the economy is slowing down as the Federal Reserve acts to bring down inflation. But even as we face historic global challenges, we are on the right path and we will come through this transition stronger and more secure… We’re not coming into recession, in my view… I don’t think we’re going to — God willing — I don’t think we’re going to see a recession.

Just so. Perhaps there is even some justice here. An economy is a delirium of activity, some pulling this way, some pushing that way.

Deciphering the signal from the noise and channeling rival information through the proper filters is complex business.

The defense may possibly hang the jury. They may even earn an acquittal from the NBER.

Yet we wonder if the defense team would cling to the conventional definition of recession if… perhaps… Donald Trump was president.

We merely raise the question in the spirit of open inquiry.

It is an election year of course. And recession generally proves fatal for the incumbent party — justly or unjustly.

The Democratic Party is the incumbent party. And so they are hot to have the recessionary charges dismissed.

Yet what if the third quarter’s gross domestic product reveals further contraction? Will they heave up the identical defense?

I think it’s still just a game of semantics. The trajectory of the economy is clearly lower, whether we’re going to define it as [a recession] or not. If anything, the third quarter is going to show further weakness. So you could have three quarters in a row of contraction for GDP. Does that technically mean we’re in a recession?

It would likely require a crackerjack attorney, a real Philadelphia lawyer, to convince a jury in that case.

The stock market was in joyful spirits today, the three major indexes up and away.

That is because recession means the Federal Reserve hawks will be doves sooner than later.