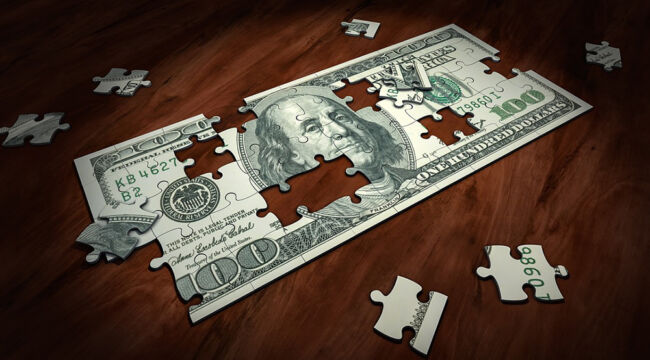 It might be hard to believe, but the government monopoly on money can be overthrown tomorrow. We, the people, can master it and make it our servant. How?

Mainly because we live in an information economy, which is an economy of mind. Meaning it can be changed as fast as minds can change.

Money is not a mystery. And a reversal of policy can affect massive improvements in very little time. In the same way that existing policies suppress growth, a change in policy can bring about an instant and sharp enhancement of all economic activity.

How do we make that change?

To answer that question, let’s review prior economic transformations and how we can learn from them…

After World War II, when 10 million demobilized servicemen returned from the front to an economy that had to be converted from a garrison state to meet civilian needs, economists steeled themselves for a renewed Great Depression.

But a big congressional Republican victory in the elections of 1946 propelled a drastic turn away from the government-planning regime of the war. Government spending plummeted by no less than 61% between 1945 and 1947.

The economist Arnold Kling of the Cato Institute observes that “as a percentage of GDP the decrease in government purchases was larger than would result from the total elimination of government today.”

Some 150,000 government regulators were laid off, along with perhaps a million other civilian employees of government.

Disbanded were such managerial agencies as the War Production Board, the War Labor Board and the Office of Price Administration, beloved of John Kenneth Galbraith. Every Keynesian and socialist economist confidently predicted doom.

In 1945, Paul Samuelson prophesied “the greatest period of unemployment and dislocation which any economy has ever faced.” There was no new depression, though. In fact, the historic ascent of America saved the world economy from socialism.

Economic growth surged by 10% over two years… The civilian labor force expanded by 7 million workers… Released from wartime controls, the private sector launched a 10-year boom despite tax rates on investors as high as 91%.

Compensating for the high top rates was an effective 50% tax cut through the enactment of the joint return for households.

Freed from regulations and tax burdens and relieved of wartime stresses, large manufacturing corporations emerged as spearheads of global capitalism.

Crucially complementing these deregulatory policies was an era of relatively sound and reliable money. Of course, this worldwide ascent from depression and war was built around a simple framework that we no longer have: the gold exchange standard…

The fixed exchange rates of Bretton Woods provided the stability that lengthened the horizons of global investment and enterprise.

Remaining in place throughout the postwar boom, they provided the monetary backing for global growth that averaged 2.8% per year for 25 years, a level unequaled before or since and almost double the growth rate since 1971.

There were few defaults, no banking crises and an efflorescence of innovation and progress in what even current prophets of “secular stagnation” regard as a golden age. Then it all changed.

After the end of Bretton Woods, in 1971, the monetary regime became mostly dependent on the politics of central banking, chiefly the U.S. Federal Reserve and the European Central Bank.

With the central banks’ ability to easily manipulate money, anyone with a long-term investment or asset, a fixed goal or visionary cause, deep pockets or commitments, a family or a career or even an enduring job becomes a gull for the government.

What people call money is actually mere credit and debt with no reliable unit of account. The thing is money is not a mere manifestation of economic power; it is a crucial source of information.

Only to the extent that its signals of value are reliable and true can it guide the learning curves of wealth creation.

In the past, the critique of monopoly money has taken the form of proposals for conferences, balanced budget amendments to the Constitution, audits of the Federal Reserve and calls for a new Bretton Woods agreement.

Yet at a time of crisis, these ideas, however appealing, seem either trivial or implausible. A return to the gold standard, however, could put us on the path to actually restoring real money.

A new gold standard will emerge when governments end their monopoly and remove obstructive taxes on alternative currencies.

Allowed to move experimentally toward the time constraints of real money, digital payment systems will evolve with gold into a new information system for the global economy.

Thus gold does not reduce the supply of real money. It increases the demand for it.

Under the gold standard in the United States between 1775 and 1900, the money supply rose faster than at any time before or since — by a factor of 160 — while the population rose by a factor of 25 and the nation forged its Industrial Revolution.

This 160-fold rise in the real money supply, moreover, produced almost no inflation.

A gold standard complemented by Bitcoin-related technologies on the internet would provide a supply of real money for the first time since 1971.

Gold enables real money by fixing its value to the passage of time. The supply is then determined by us, by private economic activity and by learning based on the informative webs of authentic price signals.

Gold already serves as a monetary metric for millions of people around the globe:

As the prices of gold and digital currencies converge, these real monies could ultimately redeem the dollar and the global economy.

New systems based on gold and blockchain innovations can evolve into a new world monetary infrastructure.

The new global money could extend the American dream of stability and futurity. Restoring real money, we can recapture the future from both Silicon Valley and Wall Street.

Opening up the horizons of opportunity again, we can save Main Street from the menace of monopoly money, transcending the dismal science of stagnation and decline and regaining the American mission and dream.

Granted, with a buildup of mountains of debt and contingent liabilities across the globe under the management of central banks, there seems to be no direct legislative path to a gold standard today.

But even if the nation cannot forcibly impose a new gold standard on the world, real money should not be seen as an arbitrary legal structure or policy.

It is an expression of the natural order of the economy — the system of the world.  And restoring sound money could work miracles of growth almost overnight.