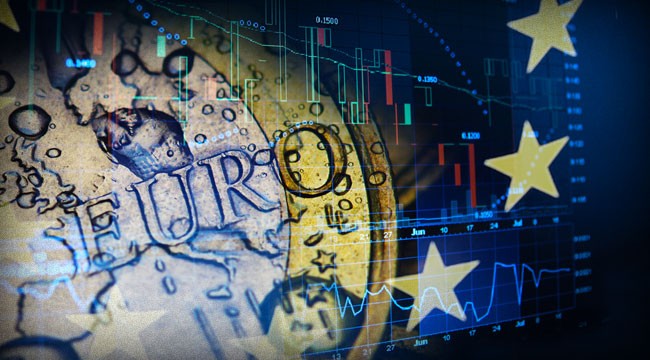 How to Profit From a Higher Euro

The euro’s heading higher from its lowest levels in five years. This is part of the secret “Shanghai Accord” struck by the “Big Four” economic powers (China, Japan, U.S. and Europe) on Feb. 26, 2016.

Investors who act now will have big gains in the year ahead.

Here’s a quick refresher on the Shanghai Accord. The Big Four needed to find a way to cheapen the yuan to stimulate the Chinese economy, which is slowing dangerously. The last two times China cheapened the yuan against the dollar (August 2015 and January 2016), the U.S. stock market fell out of bed. There was a borderline stock market collapse both times.

The solution they agreed to was to keep the yuan pegged to the dollar and cheapen the dollar. This gave China, and the U.S., some relief.

The losers were Japan and Europe, which had to endure a stronger yen and euro, respectively. That’s not what Japan and Europe wanted, but too bad. In currency wars, if someone wins (China and the U.S.), then someone else has to lose (Europe and Japan). It can’t be any other way.

We’ve recently explored the impact of the Shanghai Accord on three of the four affected currencies: the dollar, yuan and yen. Today, we complete the overview with a look at the euro.

By the way, after two months of strength, the euro and yen both weakened recently, and the dollar rallied. This occurred because of fresh talk about a Fed rate hike in June, which makes dollar assets more attractive. (Gold traded down for the same reason.) A lot of commentators asked if the Shanghai Accord was dead (if it ever existed).

The Shanghai Accord is alive and well, but it’s not a day trade. It’s intended to guide currency policy among the major economies for at least a year, possibly two. That’s why we gave it the name “Accord,” as a tribute to the Plaza Accord of 1985, which guided exchange rates for over 20 years (with a reset at the Louvre Accord, in 1987).

That period 1985–2007 was the heyday of King Dollar. It lasted through Republican and Democratic administrations, under Treasury secretaries James Baker and Robert Rubin.

We don’t have to assume the Shanghai Accord will last that long. We can take the analysis one year at a time. The point is that you don’t reach an agreement of that importance in February and tear it up in May. The Shanghai Accord will be a good guide to portfolio allocation for the foreseeable future. We always expected volatility along the way.

We’ll see what the Fed does later this month. The problem with the hawkish Fed-speak is that markets begin to expect a rate hike, tighten financial conditions, cool off the stock market and put stress on the export sector (because of a stronger dollar).

By the time the Fed meeting arrives, the Fed has decided to delay a rate hike because of the tighter conditions. Then markets rally, and the dollar drops again because a no rate hike decision is seen as dovish. Wash, rinse and repeat.

The Fed has been playing this circle game with market expectations since May 2013 and the original Bernanke “taper talk.”

If the Fed does hike rates this month, they’ll be playing with fire. Higher rates cause a stronger dollar, which will force China to devalue on its own. We’re already seeing some signs of this. In that case, it’s back to a January-style stock market collapse. That’s one more reason I expect the Fed to delay the rate hike again.

Either way, the Shanghai Accord is still alive, and the euro is expected to go significantly higher over the next year, if only to give China the relief it needs.

The European Central Bank, ECB, controls monetary policy in the eurozone using the same techniques the U.S. Federal Reserve uses for the dollar.

One technique the ECB has implemented, which the Fed has not yet adopted, is the use of negative interest rate policy, NIRP. As the name implies, NIRP is a policy in which interest is deducted from a bank account instead of added over time. If you deposit €100,000 in a bank account with a negative rate of 0.50% and wait one year, your account balance will be €99,500.

NIRP is spreading around the world like a contagious virus. NIRP is already the norm in the eurozone and Japan, two of the four largest economies in the world, alongside the U.S. and China. Other countries with negative interest rates include Denmark, Sweden and Switzerland.

Negative interest rates have not hit the U.S. yet, but the possibility is under active consideration by the Federal Reserve. About $4 trillion of sovereign debt, a substantial percentage of all the non-U.S. sovereign debt in the world, now has a negative yield to maturity.

Why are central banks including the ECB imposing negative interest rates? What is the point of this policy?

One answer is that negative interest rates are a thinly disguised tax on savers. The traditional way of stealing money from savers is with inflation. You may get a positive interest rate of 2% on your money, but if inflation is 3%, then your real return is negative 1%.

If we take the same €100,000 bank deposit in the example above and apply a 2% positive interest rate, you would earn €2,000 in interest, leaving an account balance of €102,000 after one year. But after adjusting for 3% inflation, the purchasing power of the €102,000 balance is only €98,940. This leaves the saver worse off than in the negative interest rate example above (assuming no inflation in that case).

In the first case, the banks extracted €500 through negative interest rates. In the second case, they extracted €1,060 in lost purchasing power. Any way you look at it, you lose.

This combination of lending and spending by consumers and entrepreneurs alike will lead to consumption and investment that will stimulate the economy, especially after the famous Keynesian “multipliers” are piled on top.

This theory is junk science. The reality is the opposite of what the elite academics project. The reason savers are saving in the first place is to achieve some future goal. It could be for retirement, children’s education or medical expenses. When negative rates are imposed, savers don’t save less; they save more in order to make up the difference and still meet their goals.

The other unintended consequence of NIRP is the signal it sends. Savers rightly conclude that if central banks are using NIRP, they must be worried about deflation. In deflation, prices drop. Consumers defer spending in order to get lower prices in the future.

Instead of inducing savers to save less and spend more, NIRP causes savers to save more and spend less. It’s a perfect example of the law of unintended consequences. When abstract academic theories are applied in the real world by central bankers with no real-world experience, you get the opposite result of what’s intended.

These unintended consequences are already appearing in Japan and Europe. Serious doubt has been cast on the ability of central bankers to extend NIRP beyond current levels.

However, cross-rates are driven by capital flows much more than trade flows. A strong euro implies that global investors have a preference for euro-denominated assets, such as German government bonds. But why would investors want assets with negative yields?

The answer is that yields are not the only way to win on these investments. The other way is capital gains from currency appreciation.

This brings up the issue of the numeraire, or the base currency you use to calculate profit and loss. A euro-based investor has no currency gain from a euro-denominated investment. But as a dollar-based investor, you can have huge gains if you invest on an unhedged basis in a currency that is on its way up.

So it can make a great deal of sense for U.S. investors to buy euro assets with negative yields. The big question is will the euro go up?

Currencies are different from securities. Stocks and bonds can go to zero if the issuer defaults. That’s not true with major currencies. They trade up and down in a range, but they never go to zero, except in extreme cases like Venezuela or Zimbabwe.

The euro is trading near the bottom of a five-year range. It has tested the $1.05 bottom twice and rebounded both times. This resilience happened before the Shanghai Accord.

In the eurozone, further quantitative easing and deeper negative rates are off the table, according to ECB head Mario Draghi. The ECB will keep the current stimulus in place, but not add to it. That’s part of the Shanghai Accord.

As the German bond example above shows, there are many ways to profit from a rising euro even in a negative interest rate environment.

And a rising euro is a distinct possibility as the Shanghai Accord plays out.