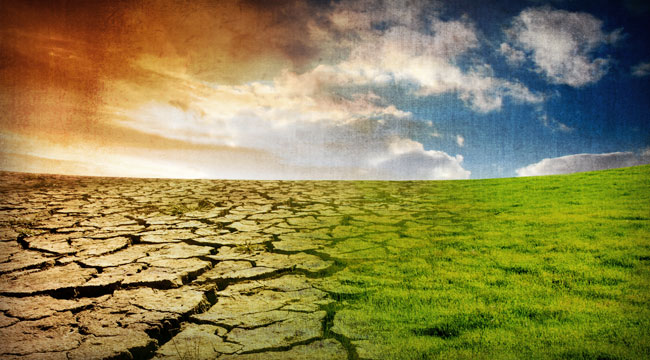 Profit from Global Warming, Even if You Don't Believe In It

The rain poured at a rate of one inch an hour. By the time dawn broke, five inches had fallen. Much of the water had nowhere to go. Basements were flooded for miles around.

What happened in the Chicago area on April 18, 2013, was no ordinary downpour: It was the leading edge of a financial storm front that will alter the flow of billions of dollars in the years to come. Your assets need to seek shelter… and today we’ll show you exactly where that shelter is.

Beware, dear reader: We are tiptoeing around the edges of “global warming.”

We’re not taking a stand about whether global warming is occurring, or whether human activity is causing it. Rather, we’re approaching the topic with a quote attributed to Trotsky in the back of our mind: “You might not be interested in war, but war is interested in you.”

For starters, imagine a “climate change surcharge” tacked onto your sewer bill.

Wealthy elites are already shifting money flows based on a belief in global warming.

One year after the metro Chicago floods, Farmers Insurance Group filed an unprecedented lawsuit against 200 local governments. The lawsuit’s premise? Farmers incurred losses because the cities failed to expand their sewers and stormwater drains… and the cities should have known better because climate change had been making Chicago-area rainstorms more frequent, more intense and longer lasting since the 1970s.

In the end, Farmers backed off the suit. Legal experts said it didn’t have a prayer: Governments are usually immune from this sort of litigation, dontcha know.

“We hoped that by filing this lawsuit,” said a Farmers spokesman, “we would encourage cities and counties to take preventative steps to reduce the risk of harm in the future.” Farmers says it is satisfied this has now taken place.

Still, the suit is “the first loud shot in what I think will be a long-term set of litigation battles over failure to prepare for climate change,” says Michael Gerrard, director of the Center for Climate Change Law at Columbia University. Governments may be immune… but private companies are not. “One could easily imagine architects and engineers being accused of professional malpractice for designing structures that don’t withstand foreseeable climate-related events,” Gerrard tells NBC News.

The world’s wealthy will become interested in global warming when it starts costing them money, says the celebrity astrophysicist Neil deGrasse Tyson.

“The evidence will show up when they need more evidence,” Tyson told MSNBC in June. “More storms, more coastlines getting lost. People beginning to lose their wealth. People, if they begin to lose their wealth, they change their mind real fast, I’ve found — particularly in a capitalist culture.”

Tyson is behind the curve. Wealthy elites are already shifting money flows based on a belief in global warming.

“Global warming will be the most important investment issue for the foreseeable future,” wrote celebrity asset manager Jeremy Grantham in 2010.

In early 2014, The New York Times reported Coca-Cola “has embraced the idea of climate change as an economically disruptive force” that’s limiting access to the water it needs for its beverages. What’s more, “Coke reflects a growing view among American business leaders and mainstream economists who see global warming as a force that contributes to lower gross domestic products, higher food and commodity costs, broken supply chains and increased financial risk.”

But it’s not all grim: “I met hundreds of people who thought climate change would make them rich,” writes journalist McKenzie Funk in his 2014 book Windfall: The Booming Business of Global Warming. Funk traveled to 24 countries over six years.

Along the way, he met people who expected to profit from drought — like Avraham Ophir, a Holocaust survivor who founded the firm Israel Desalination Enterprises. Its reverse-osmosis techniques can produce snow in warm climates. Thanks to Ophir’s firm, the slopes at the Winter Olympics in Russia this year had a steady supply of fresh powder despite temperatures approaching 50 degrees Fahrenheit.

Funk also met people who expect to profit from rising sea levels — like Koen Olthuis, a Dutch architect who’s used his country’s extensive experience with seawalls to develop solutions for island nations that might be threatened with inundation, like the Maldives in the Indian Ocean. Still other entrepreneurs are cooking up solutions to prevent another Hurricane Sandy from doing a number on New York City.

And he met people who expect to profit from melting polar ice — like Mininnguaq Kleist, who runs Greenland’s department of foreign affairs. With the ice cap melting, he’s looking for ways Greenland’s population of 57,000 can prosper from fossil fuels and minerals that were previously inaccessible.

Even the aforementioned Farmers Insurance makes an appearance in his book, based on the first of those three assumptions. Farmers has contracted with a private firm called Firebreak Spray Systems. Its co-founder Jim Aamodt made a name for himself developing the automatic sprayers in the produce section of the grocery store. His next big thing was a way to coat houses with a chemical retardant offering eight months of fire protection.

Firebreak swings into action in Southern California hot spots, spraying down Farmers-insured homes even as wildfires bear down on the neighborhood. It’s a throwback of sorts to 17th-century London, when insurance companies were the ones offering fire protection, not governments.

So there’s no shortage of money flowing because people believe in global warming. Alas, for you, the retail investor, catching some of those flows for your own portfolio can be a dicey proposition.

Funk opens his book with “The Investment Climate Is Changing” — a lavish dog and pony show put on by Deutsche Bank replicating Amazon jungle on Wall Street when it was 39 degrees outside. It was the launch event for the DWS Climate Change Fund, trading under the symbol WRMAX.

Missing from Funk’s book is the follow-up: The fund had the ill fortune of debuting in September 2007. The broad stock market topped a month later, and then came the Panic of 2008.

Unlike the broad market, WRMAX never came back. A new manager arrived in 2011 and the fund was spiffed up with a new name — DWS Clean Technology Fund. No matter: In October 2012, Deutsche Bank pulled the plug. 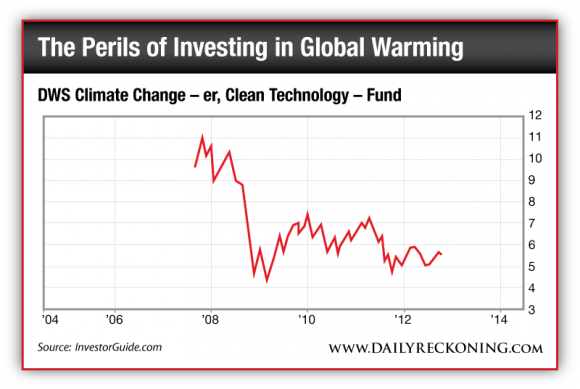 Hmmm… Surely, there’s something you could do to take advantage of this trend, no?

After all, “the impact is across many industries,” writes our friend Barry Ritholtz, money manager, blogger extraordinaire and author of Bailout Nation.

[Ed. note: It was Barry who planted the seed in our head for this essay. Understand he is an unabashed believer in global warming caused by human activity. Again, we’re taking a strictly apolitical follow-the-money approach, but if you’re still offended, write him a nasty email. He’ll be sure to delete it before going out to engage in his carbon-spewing hobbies of high-end sports cars and boats. Heh…]

The investing implications, he says, “go far beyond energy, to include agriculture, insurance, transportation, construction, recreation, real estate, energy exploration, food production, health care, minerals and even finance.” Among the possibilities he urges us to consider…

“Farmland, oil and mineral exploration rights, timber and water are the commodities of the future,” declares Mr. Ritholtz. Farmland? We’ve covered that before in these missives. Indeed: Funk devotes a chapter of his book to Wall Street’s quest for quality farmland in South Sudan, of all places.

We explained one tangential way to access farmland in more familiar locales stretching from eastern Colorado to Illinois in these pages in July.

Now, let’s get some exposure to the rest of Mr. Ritholtz’s list… check out each of the following plays…

Ed. Note: These are exactly the kind of “out there” investment ideas that can pay off big time — mainly because so few people are paying attention to them. Don’t miss your chance to get in on any other great investment opportunity before it becomes mainstream. Sign up for The Daily Reckoning email edition, for FREE, right here, and start getting regular updates on some of the world’s most unique and profitable investment opportunities.