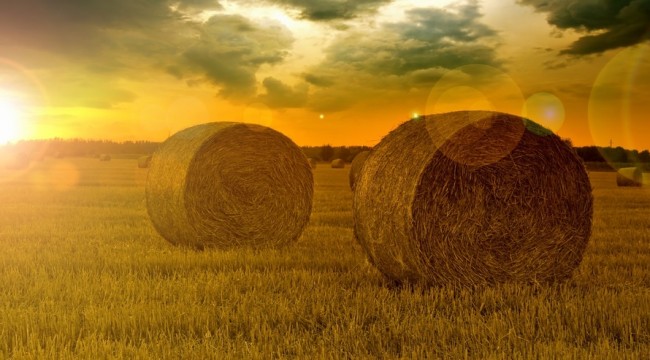 Cash-In on the Long-Term Trend in Farmland

The idea we have for you today plays off one of our ongoing themes — “extraction.”

“We’ve got a real problem! This is a mathematical fact! Tens of trillions of dollars are being extracted from the United States of America,” ranted MSNBC pundit Dylan Ratigan in 2011. “An entire integrated system — financial system, trading system, taxing system — that was created by both parties over a period of two decades is at work on our entire country right now.”

Former Treasury Department official Paul Craig Roberts — sometimes credited as the “father of Reaganomics” — elaborated on this idea in 2012. “Washington’s empire extracts resources from the American people for the benefit of the few powerful interest groups that rule America,” he writes. “The U.S. Constitution has been extracted in the interests of the Security State, and Americans’ incomes have been redirected to the pockets of the 1%.”

With farmland, the supply picture is even tighter…it’s disappearing at a rate of 275 acres an hour…

It’s an outrage… but there’s also nothing we can do to stop it. So we’ve expended no small amount of energy trying to find ways you can follow the money. If you’ve invested in the iShares Dow Jones Aerospace & Defense ETF (ITA), you’ve done very nicely “making the empire pay” and channeling some of your tax dollars back to your own pocket. In the last year, ITA is up 35%, while the S&P 500 is up 20%.

But most of our searching has come up short. In January 2012, we wrote of “a dystopian America of the near future” in which millions of foreclosed homes sitting on the federal government’s books are flipped at fire-sale prices to hedge funds and private equity firms with government connections.

This was the start of the “REO-to-rental” program in which outfits like Blackstone Group bought single-family homes for a song from Fannie Mae and Freddie Mac, turning them into rental properties.

“Once the privatization has occurred,” we quoted one expert, “and the properties are generating rental income for the investors, the initial investors will cash out by forming real estate investment trusts (REITs), real estate operating companies (REOCs) or limited partnerships (LPs) that will be made available to retail investors.”

We said that by that time, the easy money would have already been made.

In the event, the first single-family home REIT — Silver Bay Realty Trust (SBY) — went public later in 2012. It has been a miserable performer. None of the others has done any better.

A feast for the big boys, crumbs for you.

Now Wall Street is setting its sights on a different kind of real estate — farmland.

“Driven by everything from rising food prices to growing demand for biofuel, the financial sector is taking an interest in farmland as never before,” says a February report from the Oakland Institute, a farm-focused think tank in California.

The numbers cited in its report are eye-popping: $10 billion in institutional capital is looking to acquire farmland. Over the next 20 years, as the current generation of farmers heads into retirement, some 400 million acres will change hands. That’s fully one-half of all U.S. farmland.

Major players already putting down stakes on the farm include TIAA-CREF, the giant pension fund for nonprofits; Hancock Agricultural Investment Group, an arm of the John Hancock investment empire; and UBS AgriVest, an arm of the Swiss bank UBS. The three of them put together own nearly 600,000 acres.

After doing more of our own research, we think farmland still has immense potential. Remember, there’s $10 billion of Wall Street money that will be chasing after farmland over the next 20 years.

“Buy land; they’re not making it anymore,” goes the old quip attributed variously to Mark Twain and Will Rogers.

With farmland, the supply picture is even tighter — not only are they not making it anymore, but it’s disappearing at a rate of 275 acres an hour, according to the U.S. Department of Agriculture.

“The U.S. is losing farmland at a fairly rapid pace to strip malls, parking lots, highways and other forms of development,” says the farm news service Agri-Pulse. Over the last three decades, the USDA reckons the amount of U.S. land devoted to farms has fallen 7.3%. 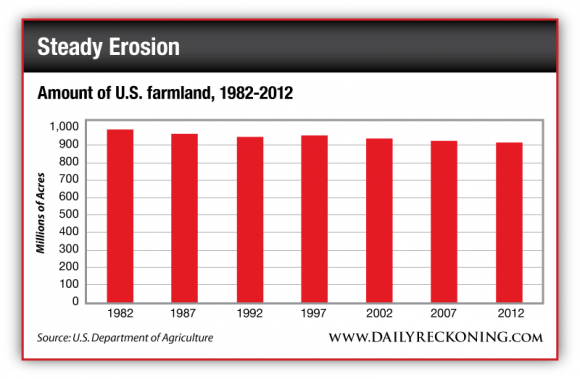 But few notice. “This is a crisis, but it’s a quiet crisis,” says Russ Shay, director of public policy at the Land Trust Alliance. “We lose farmland one farm at a time. We lose primarily smaller farms. People don’t see it.”

The iconic small farm of yore is quickly becoming a memory: Not only is there less farmland, but the land that’s left is being steadily consolidated. In 1982, half of all U.S. cropland was held on farms of 589 acres or more. As of 2007, that “midpoint acreage” figure has nearly doubled, to 1,105 acres. In key states like Illinois and Iowa, the figure has more than doubled.

And as farmland is concentrated in fewer hands, those hands are getting older and older.

“Demography is destiny,” said the French philosopher Auguste Comte. We invoked that quotation in Financial Reckoning Day, our first book co-authored with Bill Bonner, in 2003. Then, we were making a point about how a large aging population will gradually pull money out of the stock market and strain the resources of social insurance programs.

Now we invoke it to make a point about how an aging farm population will fuel the extraction process… and how you can profit accordingly.

The stark numbers are laid out in the Census of Agriculture, an every-five-year survey issued by the U.S. Department of Agriculture. The USDA issued the 2012 Census results only weeks ago.

The average age of a U.S. farmer is 58… and rising. Farmers over age 65 own 70% of U.S. farmland. Meanwhile, the number of “beginning farmers” — which the USDA defines as those who’ve been on the job 10 years or less — is down 20% from five years earlier. 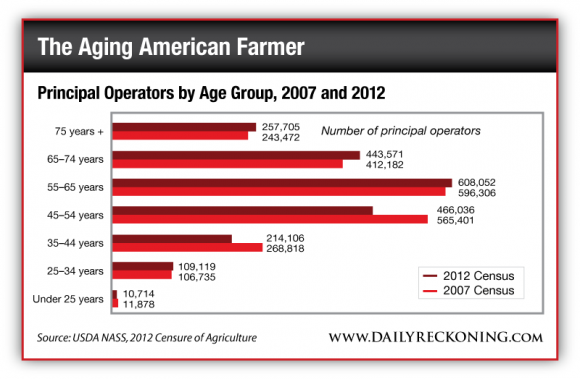 “The older generation needs to cash out because they have no retirement funds,” says Severine von Tscharner Fleming of the Agrarian Trust, “even as the new generation doesn’t have the capital to get into the kind of debt that [starting a farm] requires. Today, there is a huge number of older folks trying to decide what to do with their land, and in many places, we don’t have many years to help them make that decision.”

Some of them are indeed cashing out to acquire the funds they need to live on in retirement. Others can’t afford even that because of perverse tax incentives; they plan to work until they drop.

“It actually saves money to leave a farm as part of an estate than to pass it down to the next generation while still alive,” explains Tim Mandell of The Rural Blog. A farmer sitting on prime $10,000-an-acre Iowa farmland has little incentive to sell if he acquired the land in the 1950s and his tax basis is $200 an acre.

“Many elderly farmers simply can’t bear to share the proceeds of a wise lifetime investment when their heirs can have all past capital gains forgiven at death,” says Marcia Zarley Taylor of The Progressive Farmer magazine.

True enough. But that begs the question: What will the heirs do?

“A lot of these [aging farmers], their kids have chosen not to come back and farm, and so they don’t really have anybody to leave the land to,” says DeDe Jones, a farm economist at Texas A&M. Many farmers’ adult children are off to their own careers in the big city, with no plans to return.

The heirs’ only option? Sell the farm.

Even if the heirs want to farm, there’s estate tax to think about. If the property is worth more than $5.34 million, it’s subject to an estate tax of 40%. In many cases, there’s only one way to raise the cash to pay that tax: Sell the farm.

Which brings us to the way you can play the trend. Consider the Market Vectors Global Agribusiness ETF (NYSE:MOO).

MOO tracks some of the world’s largest agribusinesses that make 50% or more of their revenue from agriculture. Companies like John Deere & Co., Archer Daniels Midland, Mosaic, Potash and CF Industries.

It’s those revenues — from helping produce food for the masses — which underpins farmland demand in the first place. MOO will let you ride the slow, “quiet crisis” in farmland over the next 20 years.

Who knows… 20 years from now, your gains might buy you your own Lamborghini.