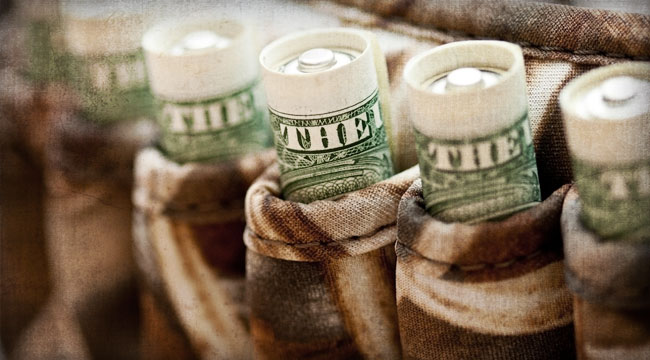 Preserve Your Wealth in the Face of Financial War

Neither adversary used those missiles and the leaders were quite careful to avoid escalations that might lead in that direction. Proxy wars were fought in places like Vietnam, the Congo and Afghanistan, but direct confrontation between the United States and Russia was never allowed to come to a head.

On August 22, 2013 the NASDAQ stock market crashed for half a trading day and no credible explanation has yet been offered for the crash.

The reason was that no matter how devastating a nuclear “first strike” might be, the country under attack would have enough surviving missiles to launch a massive “second strike” that would destroy the attacker. This is what was meant by “mutual assured destruction” or the balance of terror. Neither side could win and both sides would be destroyed, therefore they went to great lengths to avoid confrontation and escalation in the first place.

But, Russia is not without financial weapons of its own. Russians could refuse to pay dollar-denominated debts to United States and multilateral lenders. Russia could dump the billions of dollars of United States Treasury notes they own thus driving up United States interest rates and hurting the United States stock and bond markets.

Most ominously, Russia could unleash its hackers, among the best in the world, to crash United States stock exchanges. On August 22, 2013 the NASDAQ stock market crashed for half a trading day and no credible explanation has yet been offered for the crash. Hacking by Syrian, Iranian or Russian cyber warriors cannot be ruled out. This may have been a warning to the United States about enemy capabilities.

In short, the United States has no interest in intervening in Ukraine militarily and even its economic response will be muted because of new fears of mutual assured financial destruction emanating from Russia and elsewhere. Putin has thought all of this through and has taken Crimea as his prize.

Merely because financial warfare between the United States and Russia will not be allowed to go too far, does not mean that the situation in Ukraine will not impact markets. Stock markets dislike uncertainty of any kind and Russia’s intentions with regard to the rest of the Ukraine outside of Crimea certainly add to uncertainty.

Russia’s victory in Crimea may embolden China to assert territorial claims to certain islands in the South China Sea, which will increase tensions with Japan, Korea, Taiwan and the United States.

There is always the possibility of a financial attack being launched by mistake or miscalculation, which could cause events to spin out of control in unintended ways.

Investors may not be able to change this dangerous state of the world, but they are not helpless when it comes to preserving wealth. A modest allocation of investable assets to physical gold will help to preserve wealth in the face of financial war or unexpected catastrophic outcomes.