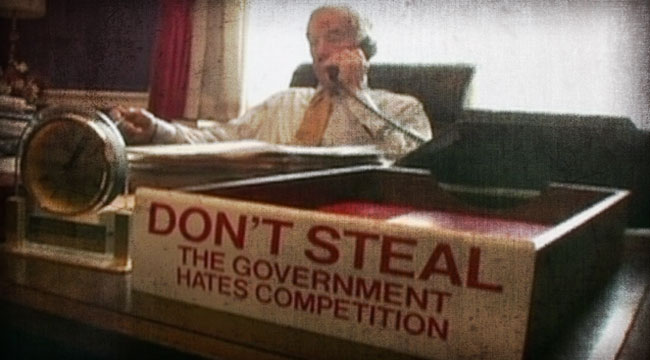 “Out of Thin Air”

When I talk to many teenagers and grade schoolers, they seem to have no problem comprehending the fact that if you just create a lot of money, it’ll be like Monopoly money and it won’t have value. Governments do that for all kinds of reasons, especially to enhance political power to fight wars we shouldn’t be fighting or to pass welfare programs that aren’t deserved.

When you print that money, the value of that dollar has to go down, and then one of the consequences of inflating the money will be higher prices. But there are a lot of other problems, too, with inflating. It causes a business cycle, it causes financial bubbles and it causes a lot of economic distortions and unemployment. But in a nutshell, inflation is very simple. When governments create new money out of thin air, you have inflation.

Inflation is immoral because it’s theft. Think about it this way: If you or I had a printing press and we could print the money just like the government does, we would be arrested and put in jail for a long, long time because we’d have stolen value — we’re pretending these pieces of paper are worth something. The Founders understood this very clearly, and that’s why they said in the Constitution that you can’t emit mills of credit, which is paper money, because they knew what runaway inflation is like.

Inflating is immoral in the sense that it steals value. If you double the money supply and your prices go up twice as much, it’s an invisible hidden tax. But the real immorality here is that some people pay higher prices than others. So if you’re in a middle class, or especially in low middle income, your prices might be going up 15% a year. Somebody on Wall Street might be working leveraged buyouts and making billions of dollars and they don’t have to worry about the rising costs of living. This to me is an immoral act that is prohibited by the Constitution, and the outcome is always tragic.

Greenspan or any chairman of the Federal Reserve is more powerful than even our president because he has so much control over the economy. But the interesting thing about Alan Greenspan was that he was a true believer in Austrian economics and in the gold standard. So in a private conversation I had with him I told him that I followed what he taught. In the 1960s, he was very clear on his position on gold, that he liked gold and rejected the fiat monetary system, because if you have fiat money, it leads to deficits and to the expansion of government — all of which he opposed.

So it’s rather ironic that now Dr. Greenspan accepts the paper monetary system (which is a fiat system). He literally was the participant in these deficits. I would bring this up to him in the committee, because the Federal Reserve Board’s chairman always condemns deficits; it’s always Congress’ fault.

But my point was Congress couldn’t do it if they weren’t complicit: If we don’t want a tax and we can’t borrow, then they have to print the money in order to accommodate the big spenders. If the Federal Reserve couldn’t do that, interest rates would go up and there would be restraint on spending. So he literally went from being one who once believed in the restraints of the gold standard to the Federal Reserve Board chairman — the one that ran this whole system of fiat money and central economic control.

In the 1960s, I was studying and reading Austrian economics and I received The Objectivist Newsletter that Ayn Rand put out. Alan Greenspan had a piece in the newsletter and it was a delightful article — it said all the things I believed in.

One day, we had a personal meeting with Greenspan just to get our pictures taken and chat for a few minutes, and we knew that was coming up. So I dug out my original copy, and I took that with me, and when we were getting ready to get our picture, I flipped it open to his article and said, “Do you remember this?”

And he said he did. Then I asked him to autograph it, so he got out his pen and he was signing it.

I said, “Do you want to write a disclaimer on this article?”

He said, “No, I wouldn’t do that. I just read this recently and I fully support everything I wrote.”

Which is interesting because you don’t know exactly what he means. If he fully supports what he wrote, why was he managing a monetary system that was exactly opposite of what he wrote in 1966?

Now we’ve lost our way; we don’t believe in what made America great, and that was individual liberty. We’ve become too dependent on government. Yet in spite of all those negative things I’ve just said and how bad Washington is and how bad the financial system is, in my travels around the country, I’m really encouraged. Because so many young people today understand this and they’re getting information off the Internet and different sources.

A lot of them get bored with this silly Keynesian economics, which is very hard to understand and impossible to get fascinated with for the average college student. So the fact that there’s so much information on the Internet to stimulate and arouse a whole new generation is remarkable.

In the ’50s, when I was interested in finding this information, there was one group in the whole country, and that was the Foundation for Economic Education, in New York. They produced literature, and you had to search for a book. There was no Internet, nothing on television that your schools didn’t produce. Today everything is so much better.

So I think the undercurrent is very, very favorable, and I think the next generation is not as tolerant of this acceptance of big government, and there are probably two reasons for that. I think they’re attracted to the ideas and the principles of liberty, but also I think they sense that we have problems and they don’t know how they’re going to pay these huge debts and these entitlement burdens that are coming. They’re sick and tired of the foreign policy, so in some way, the problems are arousing a lot of people. As long as we do our job in spreading the ideas of freedom and emphasizing the rule of law and the restraint of government, there’s reason to be hopeful.

Ed. Note: While the next generation of Americans is likely more aware of the dangers facing the U.S. economy, there is still plenty of work to do to reverse the direction we’re headed. Readers of the Daily Reckoning email edition have a serious leg-up in insuring their wealth from any potential pitfalls along the way. If you’re not yet receiving the DR email, you’re only getting half the story. Check it out for yourself, right here, for free.