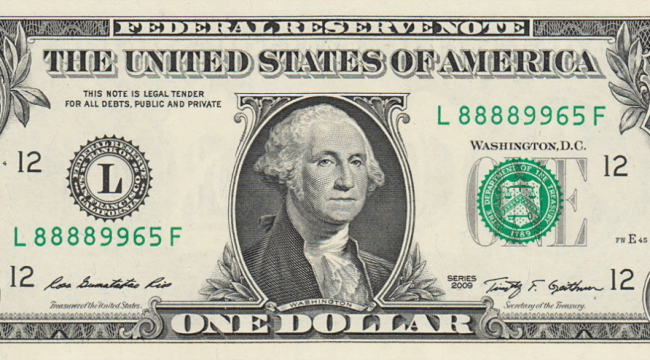 Opportunity in the Dollar Collapse

Wars, even though a major cause of today’s mess, continue. Keynesian silliness is persistently followed in Washington. Spend, spend, spend, deficits, deficits, deficits, borrow, borrow, borrow, print, print, print, but do not succumb to seeking or accepting the truth of the calamity that is being manufactured by our monetary and political leaders. The truth is obvious. Yet, the decision makers remain in total denial or ignorance.

So the Fed financed wars which satisfy special interests and have nothing to do with national security and proceed unabated. But that will end in time as the dollar system unravels. Then there will be a great opportunity — if our educational effort has been successful in creating enough widespread understanding of the freedom philosophy to rebuild and advance the cause of liberty.

While it must be realized that there will always be those seeking wars of aggression, a sound monetary policy coupled with the absence of a central bank would go a long way in diminishing the ability of the warmongers to pursue military operations.

The question I am often asked is “why?” Why do our political and intellectual leaders continue policies that defy common sense? My assessment is that it’s probably a combination of many reasons.

Some people driving US foreign policy sincerely believe that, because of our dominant position in the world, we have a moral obligation to intervene for humanitarian reasons. There are also those who support intervention for much less noble reasons — oil, power, military-industrial complex profits, etc.– and take advantage of the sentiment of the right and left supporters who want to solve problems such as border disputes and chaotic civil unrest within other countries.

There are yet others who thrive on chaos and endless wars they see as creating opportunities to remake the world. Some “world remakers” will even go so far as to engineer false flag incidents to help justify war to the people. They will also take ad- vantage to escalate hostilities when blowback and unintended consequences occur and use jingoistic propaganda to support even more war and spending.

Bad economic policy has provided a major boost to the perpetuation of authoritarian, aggressive foreign policy. Monetary policy has facilitated the finance of all wars since the US entered World War I in 1917, four years after the Fed was established. But the full influence of monetary policy on foreign affairs is much more pervasive and secretive. This became evident from the trillions of dollars of bailouts during the financial crisis of 2008 and 2009.

In secret the Fed was able to churn trillions of dollars through the world banking system, not only in America but also in Europe and other parts of the world. Banking is now global in nature so the bailing out a large bank or corporation has international significance.

Many of the funds were even used to directly assist particular countries and other central banks. The effort to do so obviously made little sense for the dollar long term. But, it was said to be in everyone’s interest to paper over the crisis and protect the banking system in the short term.

During the several decades that I worked on exposing the Fed for all the harm it causes, the information it was most protective of was its foreign operations. Even with the revelations that due to congressional pressure were finally made after the onset of the recent crisis, the Fed never fully explained how the trillions of dollars used to bail out foreign entities, international banks, and foreign countries were actually used.

Further, the fact that all this financial activity occurred outside the view of a sleeping Congress is astounding and frightening. The day must come when this power is reined in. Unfortunately, it’s not likely to happen before a dollar crisis of major proportion occurs.

Although much was learned through congressional inquiry about the massive, secret bailouts, much information is still not available to the people or to the Congress. The secrecy of the Federal Reserve regarding these bailouts begs the question: How active is the Fed in propping up foreign governments, helping war efforts, and secretly funding foreign elections and military coups around the world?

There’s no way to know how much has occurred in the past or is still happening. Considering the US government’s politically-motivated IRS actions, CIA torture programs, NSA mass surveillance, and other scandals, nothing should surprise us. Big government is out of control.

The problem of loans, supported by unlimited credit coming out of a Fed computer, that can be used for political and military operations — all outside the appropriation process and oversight of Congress — needs a close assessment. Also, the massive interference in the currency and bond markets in recent years deserves scrutiny. The Fed buys plenty of US debt with newly created credit, but so do other countries.

It’s quite possible that the credit can literally come from the Fed with a quid pro quo that those who receive it — banks or other countries — then buy Treasury bills to continue the fraudulent system designed to provide false confidence in the dollar as a reserve currency. And it is quite likely that our government and/or the Fed interferes in the gold market to suppress gold’s dollar price in an effort to support the dollar on international exchange markets.

US bankers today can get “free” dollars at will and can use them to purchase US debt, keep rates low, and boost the dollar all while earning interest on their excess reserves that the Fed generated. It’s a con game that cannot last. There will come a day when it’s not in the interest of other nations to finance our debt no matter how they get their dollars.

These easy loans certainly have not been used to rebuild the American economy. Instead they have given life to the reemergence of a stock bubble, rising prices of houses once again, and a continuation of the bond bubble. But, eventually the markets will rule and force a readjustment.

Our trade imbalance and our huge current account deficits prompt foreign holders of dollars and US debt to prop up the system in their own interests. But one should be prepared for the day when their incentive to acquire and hold US dollars disappears. When that happens, the world changes. That process may have already started.

Free market advocates rightfully target the Federal Reserve for the economic harm it causes. More people every day are waking up to the fact that the Fed is guilty of creating the economic chaos and that it is unable to rescue us from the dangers that are supposedly caused by the free market.

It’s not widely known how the Federal Reserve can and has gotten involved in foreign policy through the use of credit in secret. The Fed is constantly involved in the freezing of financial assets of uncooperative nations when directed by Congress, the Treasury, or executive order. What the Fed does at its own discretion and without permission or oversight by the Congress in times of war and peace to help or hurt friends or enemies should also be exposed and prohibited.

A policy to achieve peace and prosperity will never be fully realized so long as there is a central bank with secretive power to issue, at will, a fiat currency and to engage in central economic planning by manipulating the market and interest rates and providing benefits to friends. This interference in the financial markets generates so much disequilibrium and distortion. It creates international frictions that frequently lead to war.

There are always economic issues involved in war no matter what other issues the people may be concentrating on as a result of propaganda. And these economic issues are strong motivating factors that drive nations to war. The US record for peace since 1913 is, to say the least, dismal. Much of the blame should be laid at the feet of our central bank and its partners in crime.

It should not be a surprise to find that the strongest proponents for peace — and thus prosperity — are strongly opposed to the Federal Reserve and central banking. The power to create money out of thin air is so great that it should never be given to the politicians and secretive central bankers.

That power will always be abused as the individuals in charge yield to the temptation for legalized counterfeiting in which they can engage. A commodity currency that arises from market forces and without fraud is the monetary system that would give each nation the best chance of working toward peaceful relations.

Editor’s Note: Dr. Paul spent his formative years in the shadows of World War II. In his new book, Swords Into Plowshares, which hits shelves on Friday, he shares a very personal story of life during wartime… and a lifetime of trying to avoid the calamity that has followed. Can the U.S. still turn from endless war and violence to a future of peace and prosperity? Dr. Paul offers one viable alternative, right here.