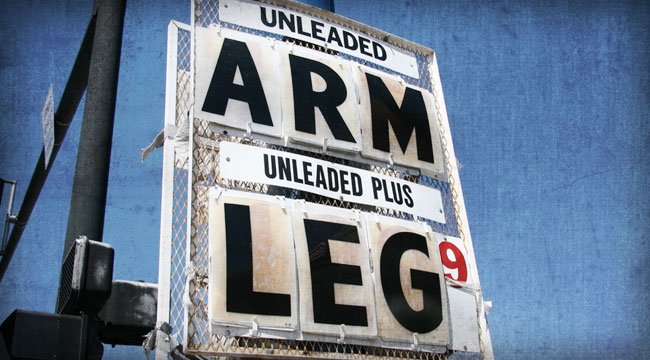 So much for Americans existing “at the mercy of OPEC.”

According to the Financial Times, U.S. dependence on oil imports from the OPEC countries is now its lowest since May 1985 — when the big box office draw was Chuck Norris in Code of Silence and Wham! topped the charts with “Everything She Wants.” (A wretched month for pop culture that was…)

“I smell a rat, and it will be served on Thanksgiving Day…”

The salmon-colored rag crunched some numbers from the Energy Department and concluded OPEC’s share of U.S. crude imports is now a mere 40%.

What the paper didn’t point out, but we will, is that because imports account for only 40% of U.S. oil use nowadays… that means we depend on OPEC for only 16% of our total needs.

We point all this out as prelude to this week’s meeting of OPEC ministers in Vienna. Will they cut production to prop up prices?

Let’s consult three reliable experts, including one of our own, to get the lay of the land…

“It seems to me that this is a bit of an artificial move,” says commodities investing legend Jim Rogers of crude’s 30% tumble this summer and fall.

“The Saudis, from what I can gather, are dumping oil because the U.S. has told them to in order to put pressure on Russia and Iran,” Rogers tells Business Insider. “And it’s probably not a real move.

“I read about shale oil like you do. But at the same time, North Sea production is declining. Russian production will start declining next year. All the major oil fields that we know about — all the production is static or declining. So it doesn’t quite add up on any kind of medium-term basis I can see.”

“I smell a rat,” says our acquaintance Erik Townsend, “and it will be served on Thanksgiving Day” — the day of the OPEC shindig.

Mr. Townsend, a commodities trader and hedge fund manager, points out Thanksgiving is not a holiday in the rest of the world. So the commodity markets are open… but liquidity is perhaps the thinnest all year because “most of the traders that are running most of the money are all in New York, and they’re with their families.

“You don’t schedule [an announcement like] that on Thanksgiving Day by accident,” Erik suggested during his weekly spot on the Financial Sense podcast. “You’ve either got to be completely incompetent, or you’ve got to be intentionally trying to take advantage of that thin liquidity.

“I predict if they [OPEC] do cut back on production, we’ll see a massive spike in oil prices, because we’re trading into thin liquidity, and that’s conducive to extreme volatility.”

Crude is holding onto its gains from late last week — a barrel of West Texas Intermediate going for $76.96.

“Thursday marked the biggest daily rise for crude since early September,” says Matt Insley of our energy desk. “I won’t put too much weight on one trading day — but our thesis that oil prices are close to a bottom is panning out nicely.

“…it appears that the decline that we’ve seen in crude prices over the past few months may be over.”

“And if we’re right,” he told his Real Wealth Trader readers on Friday, “we’ll make a killing.

“We’re still below the $85 psychological threshold (a price which I think many drillers and oilmen hold dear). But it appears that the decline that we’ve seen in crude prices over the past few months may be over.”

And this week’s OPEC meeting will only fuel the action, Matt suspects: “Up until now, the Saudis have done nothing more than posture for oil price wars. If they change their tune — which I believe they will — we could see a nice rebound in crude. Heck, we’re already starting to see it!”

P.S. The “killing” to which Matt refers is a trio of plays he’s recommending to his paid readers of Real Wealth Trader. And in today’s issue of The 5 Min. Forecast, I gave my readers a unique chance to get in on Matt’s elite research service for themselves. If you want to start seeing these kinds of opportunities — and all of the potential profits that come with them — click here right now to sign up for The 5 Min. Forecast.