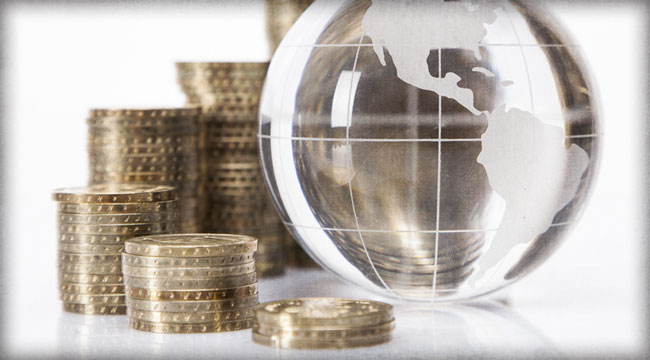 One World, One Bank, One Currency

“The government is very good at making things overly complicated for the purpose of obscuring what’s really going on from the public,” observed hedge fund manager Erik Townsend during our interview in May.

He was making a point about the 2008 bailouts. The Federal Reserve played a leading role, applying trillions in paper-clip and rubber-band solutions. The Fed’s balance sheet swelled from $900 billion in September 2008 to $4.4 trillion as we go to press.

Luckily for you, our friend Jim Rickards is just as good at elucidating the muddled world of finance as the government is at obscuring them.

Boiled down to its essence, the SDR is a kind of super money printed by the IMF…

“Since Federal Reserve resources were barely able to prevent complete collapse in 2008,” Jim writes in his recent New York Times best-seller, The Death of Money, “it should be expected that an even larger collapse will overwhelm the Fed’s balance sheet.”

Simply put, next time, printing another $3 trillion-plus won’t be politically feasible. “The specter of the sovereign debt crisis suggests the urgency for new liquidity sources, bigger than those that central banks can provide, the next time a liquidity crisis strikes. The logic leads quickly from one world to one bank to one currency for the planet.”

Leading the way, says Rickards, will be the International Monetary Fund. “The task of re-liquefying the world will fall to the IMF because the IMF will have the only clean balance sheet left among official institutions. The IMF will rise to the occasion with a towering issuance of SDRs, and this monetary operation will effectively end the dollar’s role as the leading reserve currency.”

The name is cryptic. The mechanism will prove far more inscrutable than the Fed’s alphabet-soup bailout programs in 2008. But the objective will be the same… to print money in the interest of keeping a rotten system functioning.

Boiled down to its essence, the SDR is a kind of super money printed by the IMF and then circulated among central banks and governments. Indeed, the IMF has issued SDRs three times since their creation more than 40 years ago. Each time was linked to a crisis of confidence in the U.S. dollar…

1969: The French and others recognized the United States was printing too many dollars. At the time, foreigners could still exchange dollars for gold, and there was a run on Fort Knox. The IMF created the SDR to smooth the rough monetary seas, issuing 9.3 billion SDRs through 1972.

1979: U.S. inflation soared out of control, past 14%. Oil-producing countries fretted the value of their dollar reserves was plunging. The IMF issued 12.1 billion SDRs through 1981.

A 42-page IMF paper published in January 2011 with the innocuous-sounding title “Enhancing International Monetary Stability — A Role for the SDR?” — lays out what Rickards describes. “A multiyear, multistep plan to position the SDR as the leading global reserve asset. The study recommends increasing the SDR supply to make them liquid and more attractive to potential private-sector market participants such as Goldman Sachs and Citigroup… The IMF study recommends that the SDR bond market replicate the infrastructure of the U.S. Treasury market, with hedging, financing, settlement and clearance mechanisms substantially similar to those used to support trading in Treasury securities today.”

Not that you’d use it to buy a gallon of gas or a loaf of bread. “SDRs will perhaps never be issued in bank note form and may never be used on an everyday basis by citizens around the world. But even such limited usage does not alter the fact that the SDR is world money controlled by elites.”

In fact, it enhances that role by making the SDR invisible to citizens. “The SDR can be issued in abundance to IMF members and can also be used in the future for a select list of the most important transactions in the world, including balance-of-payments settlements, oil pricing and the financial accounts of the world’s largest corporations, such as Exxon Mobil, Toyota and Royal Dutch Shell.”

The genius of the scheme is that the SDRs would create inflation… but ordinary people wouldn’t know SDRs were causing it. “Any inflation caused by massive SDR issuance would not be immediately apparent to citizens. The inflation would show up eventually in dollars, yen and euros at the gas pump or the grocery, but national central banks could deny responsibility with ease and point a finger at the IMF.”

The most provocative proposition in Rickards’ book, however, isn’t hidden global inflation. It’s this: Before the SDR can assume its role as the new leading global asset, China must accumulate a much larger stash of gold. And the gold price is being manipulated for the express purpose of making sure China gets it relatively cheaply.

We’ve long chronicled China’s gold accumulation. When we interviewed Mr. Rickards last year, he explained the rationale: “They want to be in a position where they just raise their hand and say to the world, ‘Hey, we’ve got our gold, now we’re a player. Now when the international monetary system collapses and the world has to reconfigure the system, we get a big seat at the table.’”

In The Death of Money, Rickards goes a step further: He says Western powers are making room at the table for China — using the precise mechanism we described in our “Zero Hour” scenario. Western central banks have “leased” their gold to commercial banks, and those commercial banks have sold that gold to Asian buyers — including the Chinese central bank.

“The gold price must be kept low,” Rickards writes, “until gold holdings are rebalanced among the major economic powers, and the rebalancing must be completed before the collapse of the international monetary system.”

The metric the power brokers are using to judge when China is ready to take its seat at the table? Gold reserves as a percentage of GDP. Recall the Chinese central bank last disclosed its gold holdings in April 2009 — 1,054 tonnes. Conservative estimates put that figure today at 2,710 tonnes. And as you see from the before-and-after tables nearby, it won’t take much more before China’s gold-GDP ratio equals America’s.

“The United States and China have a shared interest in keeping the gold price low,” Rickards writes, “until China acquires its gold… Once the rebalancing is complete, probably in 2015, there will be less reason to suppress gold’s price, because China will not be disadvantaged in the event of a price spike.”

His research and documentation is peerless. “Get the annual report from the Bank for International Settlements,” he told us during our dinner talk. “Read the footnotes. I understand it’s geeky, but it’s there. They actually get audited — unlike the Fed and unlike Fort Knox.”

Yet, we still wondered, who or what is the IMF’s biggest enemy in carrying out its plan?

Time, replied Mr. Rickards. “A financial panic in the next several years, caused by derivatives exposure and bank interconnectedness, may trigger a global liquidity crisis worse than the 1998 and 2008 crises,” he writes in his book. The IMF will step in but “the emerging circumstances will mean the process will be carried out on a crash basis, without reference to carefully constructed infrastructure now contemplated.”

And as he suggested in Currency Wars, the IMF might even swallow its pride and resort to some form of gold standard if that’s what it takes to restore confidence in the system.

But if that’s what it takes, expect some ugly times ahead, like Ferguson, Missouri, but worse. “Riots, strikes, sabotage and other dysfunctions,” complete with a “neofascist” response from well-armed authorities.

What can you do? What should you do?

First, prepare yourself by reading The Death of Money and understanding the seven signs Rickards says will point to a looming crisis. Then get cracking on the five investments he says can help you weather the storm.

If you haven’t gotten a copy yet, we’d advise holding off — just for a while longer. We’re working closely with Mr. Rickards on a brand-new project that will not only put his advice in your hands, but deliver constant updates and advice on how the coming monetary collapse will unfold.

In the meantime, you can probably guess what one of his recommendations is already: Go on your own gold standard right now, the rest of the world’s governments be damned.

“A fixed exchange rate is not essential to gold’s role in a contract money system,” he said. “It is necessary only that the citizen be free to buy or sell gold at any time. Any citizen can go on a personal gold standard by buying gold with paper dollars…”

He says our Zero Hour remains a distinct possibility — in which the price of real gold you hold in your hand runs away from the “paper price” quoted on CNBC. He thinks it could even be the trigger for the next crisis.

“As long as [gold] holders remain in paper contracts,” he writes, “the system is in equilibrium. If holders in large numbers were to demand physical delivery, they could be snowflakes on an unstable mountain of paper gold. When other holders realize that the physical gold will run out before they can redeem their contracts for bullion, the slide can cascade into an avalanche, a de facto bank run, except the banks in this case are the gold warehouses that support the exchanges and ETFs.”

Even Warren Buffett — that tireless critic of gold and its inability to throw off cash flow — has bought something very similar to gold, says Rickards. “Buffett has been known to disparage gold, but he is the king of hard asset investing, and when it comes to the megarich, it is better to focus on their actions than their words.”

P.S. Jim Rickards’ latest New York Times bestseller The Road to Ruin is a firebell in the night, warning everyone about the crisis that he can see coming and what they can do to protect their wealth. Governments and the global elites don’t want this book to exist. Claim your copy for FREE by clicking here.