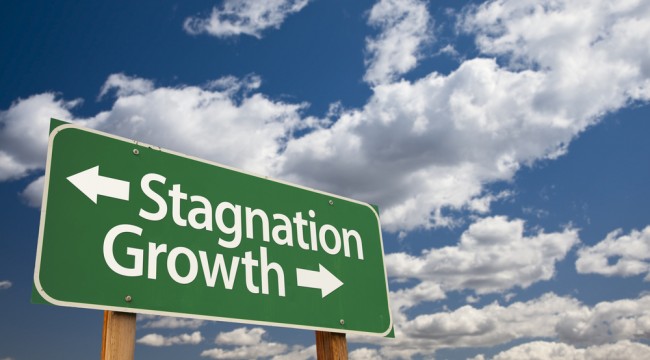 One Word Defines This Era: Stagnation

If we call stagnation progress, what have we accomplished?

Beneath the surface PR of progress, the operant dynamic of this era is stagnation. Cheerleaders of progress have a few unalloyed wins in the past 15 years–battles won against diseases, for example–and a general increase in living standards among the world’s poorest populations.

But much of what is sold as progress is an inch deep and a mile wide: the proliferation of smart phones and social media for example.

What the cheerleaders of progress don’t dare mention is the stagnation of quality, political choice, productivity and growth that isn’t dependent on the hyper-expansion of debt and financial speculation.

I addressed some aspects of the stagnation of quality in China and the Decline in Quality (and Soon in Profits), but this only scratches the surface.

In effect, rather than advance the quality of goods via increasing automation and competition based on quality, the West moved much of its manufacturing to China where the work involves hand-assembly of inferior quality materials and parts–a process in which every possible corner has been cut to lower costs.

How many of you can honestly claim that the services you get from government or global corporations are better now than it was in 2000, or 1985? Get real, people; more often than not, the service has declined or stagnated rather than improved.

Meanwhile, what services you do get cost a lot more. To get local streets repaved, now you have to approve a bond–in other words, the cost of repaving streets is being shoved onto our kids and grandkids.

In the political sphere, our choices have stagnated: can anyone claim politics has progressed when the same two dynasties of decline that have dominated the news cycle for decades (George Bush I from 1980 when he ran against Ronald Reagan in the Republican primaries and Billary Clinton since 1992) are still frolicking in the political sewers of the nation, 35 years and 23 years on?

I have read a number of essays by conventional economist cheerleaders claiming that American household incomes have risen by 50% in real (adjusted for inflation) terms since 1980 (the beginning of the age of financialization, by the way).

Ludicrously, these claims boil down to this: once government transfers and tax cuts are included in income calculations, magically, middle class household income soar.

In other words, once we count entitlements and social welfare from the federal government, household income isn’t so bad after all. Baldly stated: the middle class clings to “middle class” status thanks to payments from the government.

And how about the greatest example of progress, China? The cheerleaders never mention the real drivers of China’s boom:

Correspondent Mark G. summed up the reality of this era in one sentence:

I think historians and economists a century from now will regard this era as one of stagnation and steady decline rather than unalloyed progress.

If we call stagnation progress, what have we accomplished?