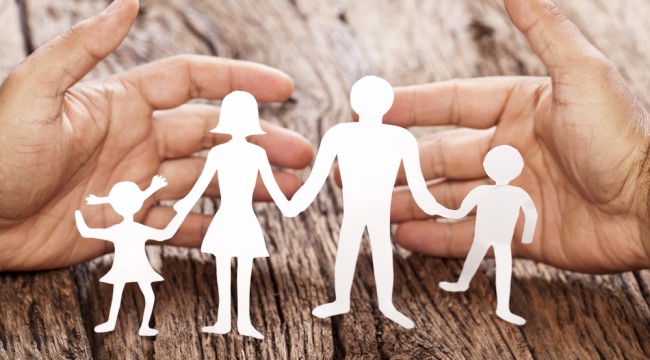 One Website that Could Vastly Increase Your Family's Safety

We all have problems. It might not always seem that way in a culture where we’re all trained to look good at all costs.

Your neighbor. That guy who just seems to “have it all together.” Even though he’s all smiles out in public, he’s just as crazy as you are behind closed doors. Probably more so if he works so hard to keep appearances up.

How many times a day do you have this conversation…

Even when you’re not doing that good?

Try this: The next time you feel like you just crawled out of a septic tank and someone robotically blurts out, “How are you?”…

They won’t expect it. You just threw their brain a curveball. Now watch the gears lock up.

You might feel down, but that doesn’t mean you can’t have a chuckle.

But even in those times when you feel like a human slug, it’s important to stay vigilant…

You should always take at least one action each day that will move you one square closer to your goal (we’ll talk a little bit more about the absolute most powerful way to do this in tomorrow’s episode).

But, of course, there’s another side to this coin.

We also believe that you should be aware of…and prepared for…any danger that might arise in your life. And take small steps to foresee and prevent these dangers.

As ol’ Benny Franklin once said, “An ounce of prevention is worth a pound of cure.”

Here’s why I bring this up…

I learned something on Sunday that could potentially save my life one day — or the life of a loved one. And I want to share it with you.

It was a huge revelation. And it happened when a friend showed me a website called Nextdoor.

Nextdoor is a free private social network for your community.

The Nextdoor website cut the digital red ribbon in 2012.

And, upon opening they almost instantaneously assembled a lockstep of users from 3,500 neighborhoods across 48 U.S. states.

Fast-forward two years, a representative recently told PBS NewsHour that Nextdoor has been adopted in over 40,500 communities in the U.S.

That’s more than one in four communities in the U.S. An incredible figure if you think about it.

It’s clearly an idea whose time has come.

Curious, I signed up for my neighborhood.

Below is a screengrab of the first thing I saw from my own neighbors.

(Excuse the redactions. My neighbors might not appreciate me publishing their names and pictures online.) 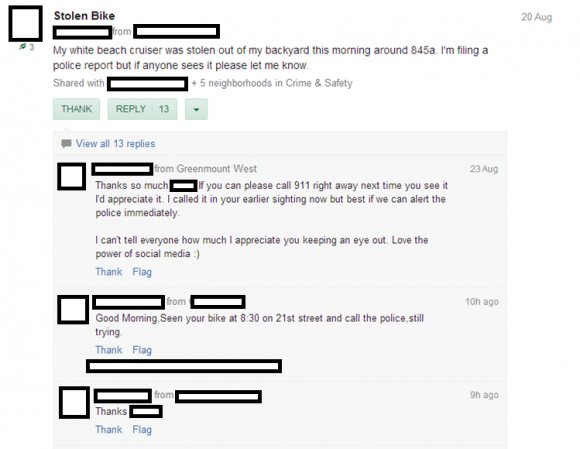 Without Nextdoor, these neighbors probably wouldn’t know one another. They’d just be strangers on the streets. And my neighbor wouldn’t have a chance at getting her bike back.

With Nextdoor, she has people…once complete strangers…looking out for her. People she barely knows.

But here’s why I really love the idea of Nextdoor…

If you know anything about Baltimore, you know that no matter where you’re at, there’s always a level of danger. Even in the “nice” areas.

Just type “Baltimore” into the Google News search bar and, more often than not, you’ll find a story about someone who just got shot…stabbed…or hit in the face with a brick.

For example, I just plugged “Baltimore” in and here’s what I found on the front page of Google… 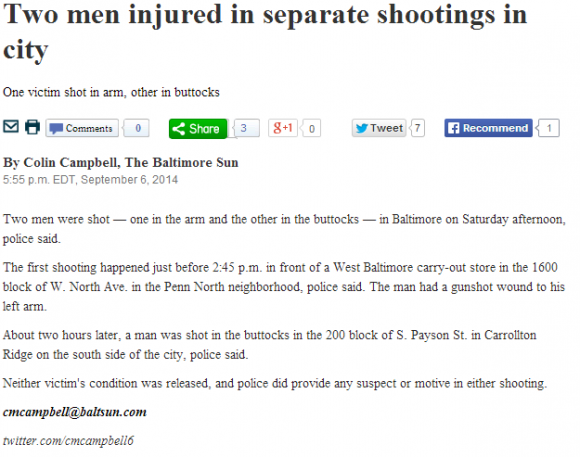 Caption: No relation to Colin Campbell, by the way. Just a weird coincidence…

My point is, Baltimore is not the most peaceful place to live…even if the criminals couldn’t hit the broad side of a barn with a banjo.

This fact hit close to home when two friends — two guys that I work closely with in our Baltimore HQ — were attacked only a block away from their home. We had just gotten back to Baltimore from a trip to D.C. and were at their house. They left to meet a friend and I stuck around.

They got about two blocks from their front door and BOOM. Attacked from behind.

Luckily, they’re OK. It could’ve been much worse.

Nothing will be done about this unprovoked (and senseless) act of violence. The police will just add it to the pile and never look at it again. You know what would be more valuable than a crumpled piece of paper in some cop’s desk? Awareness of your surroundings.

With a network like Nextdoor, this information is priceless to the safety of you and your family.

But be warned: Being so aware of what really happens in your neck of the woods may shock you. (Depending, of course, on where you live.)

“Some folks who were previously only communicating with a small handful of fellow residents,” says Darell O’Quinn, a Nextdoor neighborhood leader in Birmingham, Alabama, “are somewhat dismayed when they are made aware of the crime and other unpleasant occurences.”

Finally, I like the idea of Nextdoor because, I believe, bringing community back into your life is, in an inconspicuous way, one way of becoming more self-sufficient.

If the stuff ever hit the fan in your area, you’ll want a team. That’s where Nextdoor can help.

If you haven’t already, check out Nextdoor. I think it’s a valuable resource to have on your side.

Ed. Note: Want to hear more “lifestyle” tips like this? With a FREE subscription to Laissez Faire Today, you’ll learn how to start a business on a shoestring budget…publish the next great American novel…protect yourself from hoodlums, thieves, and hackers…get the government out of your life…and much more. Don’t wait. Sign up to Laissez Faire Today for free, right here.