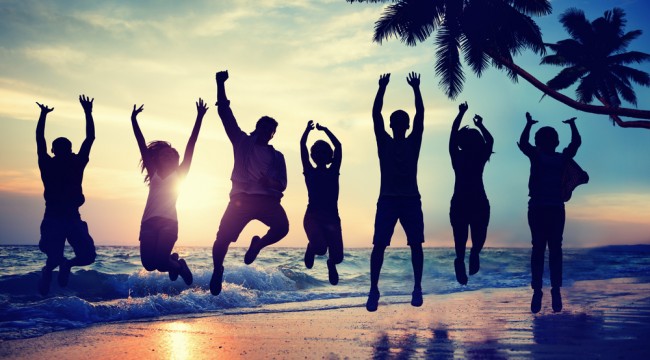 One Big Secret to Living a Happier, More Fulfilling Life

“Where were you when it happened?”

I get asked — and ask — the same question every year. Everyone has a story of where they were on Sept. 11. And we all remember it in vivid detail.

And, no matter what vantage point we come from, it’s always traumatic and heartbreaking.

But, luckily, there’s something about the human spirit that keeps going. Pushing further.

Sometimes it takes a tragedy for people to wake out of their slumber and realize the world is calling.

We promised you yesterday we’d share the third and final thing you can do to confront life’s challenges “like a ravenous obstacle-crushing beast.” And create a life most people can only dream about.

Here’s the final peg in the trifecta. The ultimate “skeleton key” starts with author Chris Guillebeau and his newest book The Happiness of Pursuit.

“All over the world people had discovered the same way of bringing greater purpose to their life,” he writes.

Chris isn’t just a prolific author…he’s also an ardent globetrotter. In fact, he’s one of the few who has visited every country on Earth. All 193 of them.

During his travels, he noticed that some people he came across “had been toiling away at a goal for years without any recognition. Going for it, whatever ‘it’ was, was simply something they found meaningful and loved to do.”

That is the final secret we have to share. The big one.

During Chris’ travels, he looked for people who had “it.” Who had found something meaningful and that they were passionate about. No matter what “it” was.

“I want to make my life worthwhile,” one passionate woman told Chris while he was globetrotting. “I consider myself an instrument, and if I don’t put myself to work for the greatest possible good, I’ll feel like I wasted a chance that will never return.”

Another woman, middle-aged, devoted the rest of her life to seeing every possible species of bird. And she also did it with a passion unlike anything he’d seen. “What started as a hobby,” says Chris, “turned into an obsession after receiving a diagnosis of terminal cancer.”

A teenager from the Netherlands set out to sail the seas. She became the youngest person in history to successfully circumnavigate the world’s oceans alone. “I did this for myself,” she told him once she’d finished. “Not for anyone else.”

Some see this act as selfish, going for “it”…

Many would say these people are running away from “reality”…

Really, most of the people who say these things would like to have an epic journey…they’re just too afraid to make that first step. Sometimes it takes a tragedy for people to wake out of their slumber and realize the world is calling.

“My own quest to visit every country initially came from a post-Sept. 11 experience,” Chris reveals, “after which I wanted to find a way to meaningfully contribute.

“My soul-searching led to four years on a hospital ship in West Africa, which sparked everything that would come later.

“Why should you consider a quest?” Chris asks.

“You long for a challenge that requires you to develop new muscles and acquire new skills, and if you’re willing to work for it, you can find it…or perhaps even better, you can create it for yourself.”

We bring up Chris’ book for another reason too. We were reminded of it after coming across an email from one of my Laissez Faire Today readers, Linda Brown.

Linda is a perfect example of someone who has found “it.”

So far, Linda has written five books, three of which are already published on Amazon.

They are written, her website says, “to encourage boomers approaching retirement to take risks in living & enjoying the rest of their lives.”

What I’ve read so far from one of her books, Hey Boomers, Dust off Your Backpacks, is profound, smart, inspirational and hilarious.

In it, she describes her year-long solo wandering around the globe depending entirely upon her Social Security income.

“Along the way,” the description reads, “she collected colorful and adventurous friends and proved that the world can be a very safe place for a wide-eyed, trusting soul. This is not another how-to travel book. It’s the story of what happens when you dare to go.”

Linda wrote to us because she wants to learn ways to supercharge her publishing strategy for her upcoming book, titled…

Sleeping With Guys Half My Age: Hosteling Solo Around the World.

Heh. We just can’t seem to get away from the erotica these days.

“I’ve traveled the hard way around the world twice,” she told us in her first email. “I’m still on the road, writing now from Port Lopez, Ecuador. But flying to the States for a break this week.”

Linda has found “it.” And that’s awesome.

“Tragedy should be utilized as a source of strength.”

“It” isn’t only about traveling the world…and it doesn’t necessarily even mean that you have to leave home.

“It” can be whatever you want it to be. Just as long as you go for it (and you probably already have a pretty good idea what “it” is).

So if today’s episode stirs something up in you…if what we’re talking about creates a “pull”…follow that. See where it leads you.

If you’re on the fence, jump.

There’s a Tibetan saying. “Tragedy should be utilized as a source of strength.”

“No matter what sort of difficulties,” the Dalai Lama once said, “how painful experience is, if we lose our hope, that’s our real disaster.”

So, before we wrap up, try this…

Imagine yourself a year from today, looking back at how Sept. 11 changed your life again.

But this time…it was for the better.

Ed. Note: Like what you see? Want to get it before anyone else — including specific, actionable recommendations? All you have to do us sign up for Laissez Faire Today, for FREE, right here. In each issue you’ll learn how to make more money… live more freely… stop worrying about the bullsh*t… and have more fun than you’ve ever had before. So don’t wait. Sign up for FREE, right here, and start getting Laissez Faire Today delivered straight to your inbox.