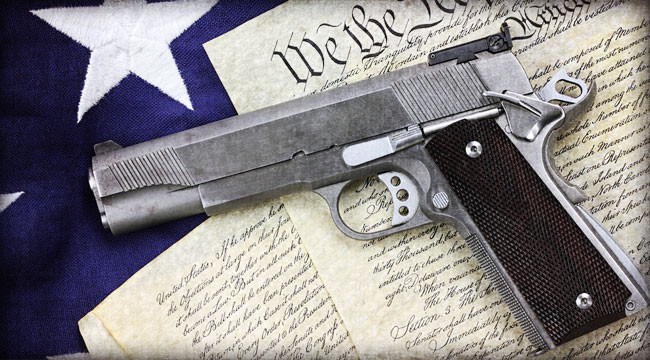 On the Usefulness of the 2nd Amendment

A few months ago at a demonstration against the president of Montreal, Maine and Atlantic Railway, a Canadian citizen made the following claim: “We don’t have guns, we are not Americans, we are civilized.” A few days before, in early July, a train of the company had run away and exploded in Lac-Megantic, Quebec, killing 47 people. The tragic derailment had nothing to do with guns but, like this angry demonstrator, many people in the world believe that the American taste for guns is uncivilized.

The Second Amendment to the U.S. Constitution is an anomaly in today’s world. It states, “A well regulated Militia, being necessary to the security of a free State, the right of the people to keep and bear Arms, shall not be infringed.”

Some people can’t imagine that tyranny could ever overcome our modern democratic systems. But history shows that liberty is rare and never secure.

One of the major judicial events in the past decade has been the Supreme Court’s decision in the Heller case. The Court held that, in conformity with much recent scholarship, “The Second Amendment protects an individual’s right to possess a firearm unconnected with service in a militia, and to use that arm for traditionally lawful purposes, such as self-defense within the home.”

The right of common people to keep and bear arms — that is, to own and carry — was protected in England until the early 20th century. This is where the American Founders originally got the idea.

In other civilized countries, at least around the 19th century, the right of private citizens to arms was often respected in practice, even if it had little or inconsistent legal bases. As the 20th century progressed, however, this right was abolished practically everywhere, even though bits and pieces of it remained as a privilege. Only in America did the right to keep and bear survive, albeit with mounting restrictions until around the 1970s.

How useful is the Second Amendment? More useful than many people think. Europeans, Asians, and Canadians who see it as an uncivilized remnant of the past are wrong.

There is much research showing that guns in the hands of private citizens are effective self-defense tools against common criminals, as well as an effective way of deterring crime. John Lott’s econometric estimates suggest that a large number of murders and rapes have been deterred by the legalization of concealed carry in many states over the past three decades (see, for example, his book More Guns, Less Crime). The more likely an honest citizen is armed, the less tempted a thug will be to attack him.

On the other side of the debate, even the government’s Centers for Disease Control has been unable to prove that gun control laws have actually decreased violent crime.

If the availability of guns makes it easier for criminals to get guns, it also helps peaceful citizens defend themselves. Gun control mainly restricts the number of guns in the hands of law-abiding individuals. Thus, it’s not surprising that gun ownership and carrying by peaceful citizens do not increase the net amount of violence.

It is true that the U.S. has a higher level of violent crime than other rich countries. Yet over the past three or four decades, it has been decreasing as fast, and sometimes faster, in America than in other countries.

Likewise, states bordering Canada generally have lower murder rates than their neighboring provinces or territories. Many other illustrations of the lack of correlation between guns and violence can be found.

It’s also important to remember that 62% of gun deaths are caused by suicide, as opposed to homicide and a small number of accidents.

Another reason for the citizen’s (or, in English terminology, the subject’s) right to keep and bear arms related to the capacity to resist tyranny if the need ever arose. Legal theorist William Blackstone clearly recognized this reason in his famous 18th-century Commentaries on the Laws of England. The American Founding Fathers held similar beliefs. The Supreme Court, however, is not clear on this point (even if its Heller decision cites Lysander Spooner!).

It’s reasonable that you might ask if armed individuals could hope to successfully resist a modern state with its vastly superior armament and power. Yet the very fact that an armed populace could offer some significant resistance, even if ultimately unsuccessful, would provide a degree of deterrence to a potential tyrant.

This is presumably why all would-be tyrants typically disarm their populations. The higher the cost to a potential tyrant of fulfilling his plans, the less tempted he will be to proceed.

Nothing is perfect, but resistance to tyranny is better with guns than without. Not surprisingly, many analysts — for example, Daniel Polsby and Don Kates in the Washington University Law Review — have argued that the right to keep and bear arms can, to a certain extent, protect people against holocausts and genocides.

Some people can’t imagine that tyranny could ever overcome our modern democratic systems. But history shows that liberty is rare and never secure.

One does not need to imagine a full-force attempt to establish tyranny in order to understand why firearms can be useful. A civil war leaves unarmed individuals at the mercy of anybody who has a gun.

In another, perhaps more plausible scenario, wide-scale social disorders, where the government would be incapable of properly maintaining law and order, would leave unarmed individuals defenseless. And though terrorists often prefer bombs and other weapons of mass destruction, the mall attack in Kenya showed that they may also choose to use guns against disarmed victims.

Of course, the Second Amendment does not force individuals to own or carry guns. A right is not an obligation. But many individuals naturally want the insurance policy that ownership of guns provides.

And don’t forget the symbolic dimension to the Second Amendment. When the rulers are armed and their subjects disarmed by law, it’s difficult to justify any sentiment of individual sovereignty. At the time of American slavery, slaves were deprived of Second Amendment rights. The progress of civilization consists of upgrading slaves to free men, not reducing free men to slaves.

Yet this recent progress has been unequal. The right to own and carry guns varies from state to state. In some states, simply owning a gun requires a license. A small group of states — Vermont, from time immemorial, plus Arkansas, Alaska, Arizona, and Wyoming — allow conceal carry without a license. Most states require a license. A few do not allow any carrying . So far, the Supreme Court hasn’t made it clear to which extent carrying is protected by the Second Amendment.

It is the supporters of the Second Amendment who are on the side of civilization.

This is not to say that only state governments are guilty. The two major federal gun control laws are still on the books: the National Firearms Act of 1934 and the Gun Control Act of 1968.

Moreover, 8 out of 100 Americans (nearly one out of 10!) are “convicted felons” and, as such, aren’t allowed to own any sort of firearm at all. As we know, most of these felonies are victimless or regulatory crimes, as opposed to violent crimes and real frauds.

A pessimist could even think that the liberalization of gun controls over the past three decades has been a subtle way to force “law-abiding” citizens to keep obeying any sort of law. If they don’t, they could lose their Second Amendment rights.

Clearly, the Second Amendment is not a panacea. But it remains useful. To the extent that it is respected, it is a powerful guarantee of the individual right of self-defense, an additional cost that potential tyrants must face, and a powerful symbol of individual sovereignty. It needs to be defended and better implemented.

It is the supporters of the Second Amendment who are on the side of civilization. And in Western civilization, that’s based on the value of the individual. Gun control advocates and prohibitionists, on the contrary, represent the forces of authoritarianism.

Pierre Lemieux
for The Daily Reckoning

Ed. Note: This essay was prominently featured in the free Laissez Faire Today email edition. To sign up for free, click here.