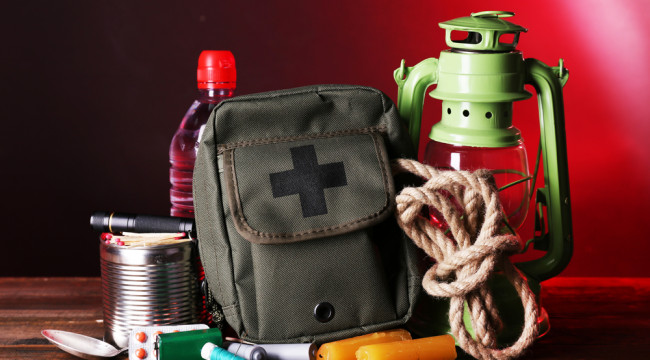 The Department of Homeland Security’s ready.gov website is decked out accordingly. “This month,” said President Obama in a proclamation issued yesterday, “I encourage all Americans to bolster their readiness in the event of a crisis.”

In a completely unrelated development, Mr. Obama about to become “the first U.S. president to receive a crash course in survival techniques from Bear Grylls,” says a press release from NBC, also issued yesterday.

The president is in Alaska this week… and as part of his sojourn, he’ll record an installment of the reality TV show Running Wild With Bear Grylls. Exactly what survival techniques he’ll learn today, no one’s saying — we’ll have to wait until the program is broadcast later this year. Yeah, that’s real appointment viewing.

We mean it when we say this development is completely unrelated. We looked for “Bear Grylls” and “National Preparedness Month” on Google News and nothing came up that included both of those search terms.

Evidently, no one in the White House managed to put two and two together to give National Preparedness Month an extra publicity boost. That’s how huge and ungainly the federal government has become.

In still another completely unrelated development, the Dow slid more than 300 points during the first hour of trading this morning.

The VIX, the market’s “fear gauge,” has popped back above 30 — validating technician Jonas Elmerraji’s observation here yesterday: The VIX measures the perception of volatility… and while it pulled back last week, a separate measure of actual volatility in the market remained elevated. The VIX is playing catch-up now.

These numbers usually come out on the first of the month. Numbers greater than 50 indicate growth in manufacturing. Lower than 50 mean a shrinking factory sector…

That’s the rub, isn’t it? Central banks are trying their damnedest to generate inflation. They’re pushing buttons and pulling levers… but economies consist of real human beings who don’t operate like machines and don’t always cooperate with the designs of central bankers.

Deflation and Gold: A Contrarian View

Inflation and deflation battle for control of the global economy. What happens to gold? Brian Maher has more…