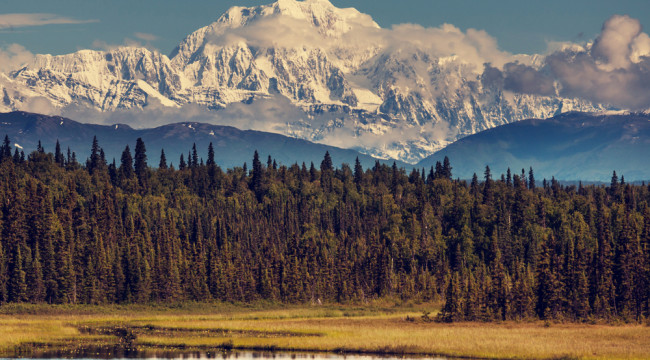 A “historical accident” could finally be corrected, but at what cost? And to what end?

This week, Secretary of the Interior, Sally Jewell signed an order renaming America’s tallest peak, Mount McKinley, to Denali. This follows decades of failed attempts by Alaskan lawmakers dating back as early as 1975.

But Let’s back up a bit first. Just how did this Alaskan mountain become the namesake of our 25th president?

In 1896, a gold prospector returned from the wilderness of the Alaskan frontier with stories about an epic mountain — a mountain that natives had always referred to as Denali, or “the high one.” NBC reports:

The prospector had another idea: name the peak after a Republican from Ohio who was running for president on a platform that included linking American currency to the value of gold.

His name was William McKinley.

The future president had never been to Alaska, and never would go. But the name somehow stuck.

That is how America’s tallest peak became Mount McKinley. And after all these years, the flimsy historical connection between man and mountain has officially unraveled.

Obama supported the move, which coincides with his upcoming trip to Alaska to urge action against global warming.

To Alaskans, this is an applauded victory and symbolic gesture. To many, this doesn’t seem like such a big deal. To Ohio republicans… well, Dispatch has the story:

Rep. Bob Gibbs, R-Lakeville, whose district includes Canton, where McKinley lived as an adult, said lawmakers are sending a letter to the White House on the issue, pointing out that Congress created Mount McKinley National Park in Alaska in 1917.

“Some people are saying this isn’t worth fighting for,” said Gibbs. “But I think it’s disrespectful of President McKinley’s legacy.”

Former Rep. Ralph Regula even went so far as to call Obama a “dictator” for changing the name, and his move to be “constitutional overreach”:

Obama “thinks he is a dictator and he can change the law,” said former Rep. Ralph Regula, who retired in 2008 after serving 18 years. “The law says it’s Mount McKinley, and he can’t change a law by a flick of the pen. You want to change the Ohio River? You want to go around the country and start changing the names of these places because it is politically expedient?”

Regula, a Republican whose district included Canton, assailed Obama’s move as a “political stunt” and “ridiculous,” adding that the president “is trying to appease a small group in Alaska who are really hot on this name change.”

“This is just show business,” Regula said. “He’s going to Alaska, and he wants to make a big splash up there,” referring to Obama’s three-day trip to Alaska that began on Monday.

But fear not, dear readers! “The Donald” is here with a pledge to reverse Obama’s renaming of Denali. Always the active tweeter, Trump had this to contribute to the controversial name change:

President Obama wants to change the name of Mt. McKinley to Denali after more than 100 years. Great insult to Ohio. I will change back!

But he wasnt the first 2016 contender to speak out against the move. The Hill reports:

On a campaign stop in Columbus Monday, Ohio Gov. John Kasich (R) said there was no reason to remove McKinley’s name.

“You just don’t go and do something like that,” Kasich said, according to The Associated Press. “In Ohio, we felt it was appropriate. A guy saw that mountain when he was one of the first up there … named it after the president. No reason to change it.”

The mountain, in fact, got McKinley’s name before he was elected, and he never set foot inside Alaska.

Kasich had tweeted his opposition earlier in the day, saying Obama had overstepped the limits of his authority.

As POTUS once again oversteps his bounds, Ohio knows every carnation is a monument to our own William McKinley. -John pic.twitter.com/GvQfqnIKOh

But the real question remains — is this worth fighting for? Political correctness aside, what are the implications of the government intervening and changing the name of a historic location?

And if Mount McKinley is out, which locations and landmarks are next?

The Daily Beast makes the very valid point that most significant American locations and landmarks have an older name that was given by a tribe that dwelled there. Essentially, there isn’t much the U.S. government hasn’t renamed at some point.

Most U.S. territories were at one time populated by Native American Tribes, so where do you draw the line? The Daily Beast continues:

There are other prominent examples. Mountains seem to inspire the rebranding spirit—something about the natural beauty, surely.

For example, Mount St. Helens, which is known to the Klickitat people of the Pacific Northwest as Louwala-Clough, meaning “smoking mountain.” Mount Rushmore’s original Sioux name translates to “six grandfathers,” which means at best we’re two busts short of its given name. Rushmore was given its English name in 1885, St. Helens in 1792.

Everywhere from Yellowstone to Disney World was at one time populated by Native American tribes, so in theory every locale in the U.S. has something to revert to. Tuba City, Arizona, has nothing to do with the instrument. It was an Europeanized pronunciation of the name of a Hopi leader that the Mormons got wrong in the 1870s. It has another name.

But compared to Mount McKinley, there isn’t really movement to return any of these places to their native roots—at least not one supported by government officials so aggressively.

At a time when global economies are on the verge of collapse, stock markets are crashing, and ISIS terrorizes the middle east, investing so much time and energy into changing the name of a mountain seems trivial.

The Daily Beast goes on to point out that getting rid of derogatory names is a arguably more pressing issue than returning authentic names to Native American cultural landmarks, citing the NFL’s Washington Redskins as an example, or the fact one of the only three Senate office buildings is named after the archenemy of civil rights, white supremacist Richard Russell:

If we’ve managed to get McKinley changed, it’s almost like we should be past these other hurdles already.

In other words, we’ve still got a long way before Yellowstone, Mount St. Helens, and the other wonders of nature in the U.S. get a chance at a rebranding. But it’s nice to know that if you put a name change up for consideration, it might only take 40 years to get it passed.

So there you have it, folks. Just another example of big government inefficiency.

There are bigger fish to fry, and if the issue of Mount Mckinley takes four decades to solve, don’t expect to see expedient changes elsewhere in our country any time soon.

P.S. Be sure to sign up for our free tech e-letter Tomorrow in Review. When you do, Stephen Petranek, former editor-in chief of Discover Magazine, friend of Elon Musk, and TED Talk speaker with over one million views, will write to you each day about bleeding edge technology that’s set to transform your life, work and investment portfolio. Signing up is free — click here now to subscribe!