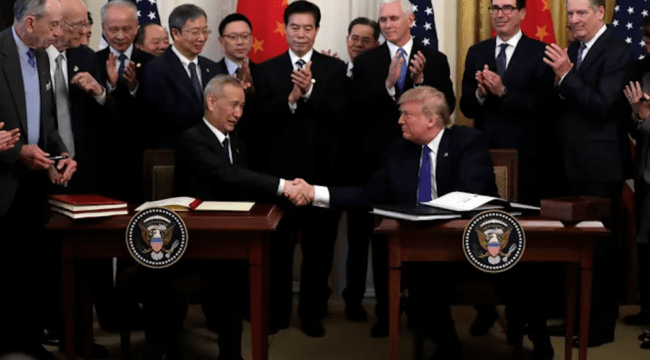 Stocks were up and away this morning, aloft on happy wings. And as stocks went up… records came down.

Both the Dow Jones and S&P established fresh highs today.

Today is — after all — when the United States and China stowed their differences… and came formally to terms.

President Trump and Chinese Vice Premier Liu He signed their names to a “phase one” trade accord late this morning.

What precisely did they pledge? AP draws the overall sketch:

Under the Phase 1 agreement, which the two sides reached in mid-December, the administration dropped plans to impose tariffs on an additional $160 billion in Chinese imports. And it halved, to 7.5%, existing tariffs on $110 billion of goods from China.

Once the handshakes were over, the president seized a microphone and gushed:

Today we take a momentous step, one that has never been taken before with China, toward a future of fair and reciprocal trade with China. Together we are righting the wrongs of the past.

And so there is more joy in heaven this day. But will there be more joy on Earth the next?

We are not half so convinced. The wrongs of the past — if they be wrongs at all — may well remain wrong.

The warring parties have signed a truce, it is true. But truce is not peace.

Truce may be no more than a mere respite from arms, a temporary cessation of fire, a brief clearing of battlefield smoke.

It cuts in half tariffs on certain Chinese wares from 15% to 7.5%. Yet tariffs on some $360 billion of Chinese exports stand in place.

Perhaps two-thirds of Chinese goods remain under penalty. As do more than half of all United States shipments to China.

Most analysts say any meaningful resolution of the key U.S. allegation — that Beijing uses predatory tactics in its drive to supplant America’s technological supremacy — could require years of contentious talks. And skeptics say a satisfactory resolution may be next to impossible given China’s ambitions to become the global leader in such advanced technologies as driverless cars and artificial intelligence.

The deal also does not address cybersecurity or China’s tight controls over how companies handle data and cloud computing. China rejected American demands to include promises to refrain from hacking American firms in the text, insisting it was not a trade issue.

“[The deal] hardly addresses in any substantive way the fundamental sources of trade and economic tensions between the two sides, which will continue to fester.”

And so the generals remain huddled over their charts… the cannons are still loaded… and the troops are ready to answer the bugle.

They only await orders from the commander in chief.

The president has vowed to tackle China’s multiple trade atrocities in phase two of negotiations.

That is why he has held most existing tariffs in place. These represent the stick end of the “carrot and stick” polarity.

He will wield them as clubs, forcing Chinese concessions in this crucial second phase.

But phase two must wait. The president has suggested — strongly — that negotiations may not proceed until this year’s election is decided.

Assume they do proceed…

Will Mr. Trump club China into submission? Will China throw down its arms… and come marching into camp?

Not if it means losing “face,” argues Jim Rickards:

Culturally, saving face may be more important to the Chinese. The Chinese are all about saving face and gaining face. That means they can walk away from a trade deal even if it damages them economically.

The Lord only knows if it holds…