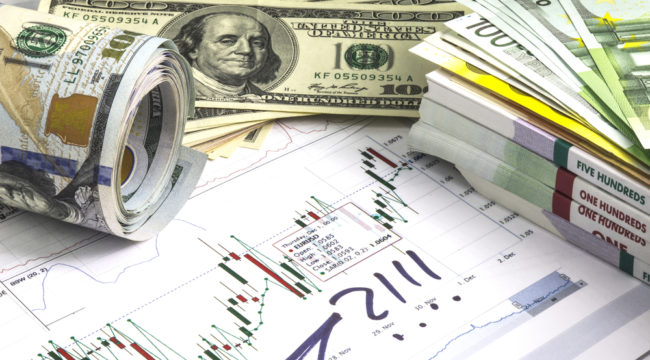 Now, a Trade War — Is a Shooting War Next?

A popular thesis since the 1930s is that a natural progression exists from currency wars to trade wars to shooting wars. Both history and analysis support this thesis.

Currency wars do not exist all the time; they arise under certain conditions and persist until there is either systemic reform or systemic collapse. The conditions that give rise to currency wars are too much debt and too little growth.

In those circumstances, countries try to steal growth from trading partners by cheapening their currencies to promote exports and create export-related jobs.

The problem with currency wars is that they are zero-sum or negative-sum games. It is true that countries can obtain short-term relief by cheapening their currencies, but sooner than later, their trading partners also cheapen their currencies to regain the export advantage.

This process of tit-for-tat devaluations feeds on itself with the pendulum of short-term trade advantage swinging back and forth and no one getting any further ahead.

After a few years, the futility of currency wars becomes apparent, and countries resort to trade wars. This consists of punitive tariffs, export subsidies and nontariff barriers to trade.

The dynamic is the same as in a currency war. The first country to impose tariffs gets a short-term advantage, but retaliation is not long in coming and the initial advantage is eliminated as trading partners impose tariffs in response.

Despite the illusion of short-term advantage, in the long-run everyone is worse off. The original condition of too much debt and too little growth never goes away.

Finally, tensions rise, rival blocs are formed and a shooting war begins. The shooting wars often have a not-so-hidden economic grievance or rationale behind them.

Meanwhile, a global trade war emerged after the Smoot-Hawley tariffs (1930) and comparable tariffs of trading partners of the U.S.

Eventually, the world was engulfed in the flames of World War II, and the international monetary system came to a complete collapse until the Bretton Woods Conference in 1944.

Is this pattern repressing itself today?

Sadly, the answer appears to be yes. The new currency war began in January 2010 with efforts of the Obama administration to promote U.S. growth with a weak dollar. By August 2011, the U.S. dollar reached an all-time low on the Fed’s broad real index.

Other nations retaliated, and the period of the “cheap dollar” was followed by the “cheap euro” and “cheap yuan” after 2012.

Once again, currency wars proved to be a dead end.

Now the trade wars have begun. On Thursday, July 27, the U.S. Congress passed one of the toughest economic sanctions bills ever against Russia.

This law provided that U.S. companies may not participate in Russian efforts to explore for oil and gas in the Arctic. But it went further and said that even foreign companies that do business with Russia in Arctic exploration will be banned from U.S. markets and U.S. contracts.

These new sanctions pose an existential threat to Russia because depends heavily on oil and gas revenue to propel its economy.

Russia has vowed to retaliate.

Meanwhile, the long-expected trade war with China has begun at last. This is a trade war that President Trump threatened the entire time while he was on the campaign trail. Yet after Trump was sworn in as president he did nothing about Chinese trade and currency practices.

Trump did not declare China a “currency manipulator” and did not impose tariffs on Chinese steel and aluminum being dumped on U.S. and world markets.

The reason Trump did not act swiftly was because he wanted China’s help facing North Korea’s nuclear weapons and missile programs. If China would put pressure on North Korea, Trump would go easy on China.

But China did not hold up their end. China has done nothing to change North Korea’s behavior and will not do so in the future. Now Trump has no reason to hold back.

So while Trump can claim that these tariffs were not specifically targeted at China, that is exactly what they were.

After Trump announced the tariffs on solar panels and washing machines. the Chinese Commerce Ministry expressed “strong dissatisfaction” and said it “aggravates the global trade environment.”

Now yesterday, the Trump administration announced plans to impose tariffs on steel and aluminum. The plan slaps a 25% tariff on steel and 10% on aluminum. While the tariffs are expected to apply to all countries, China was certainly a strong consideration. Trump plans to sign the trade measure next week and said they would be in effect “for a long period of time.”

Incidentally, the announcement came the same day when senior officials were scheduled to meet with China’s top economic adviser, Liu He.

I expect the U.S. will soon label China a currency manipulator, which will lead to still further sanctions. Like Russia, China will not take any of this lying down but will retaliate with its own sanctions, tariffs and bans on U.S. investment in China.

China leaked an announcement recently that the People’s Bank of China was considering allocating its reserves away from additional purchases of U.S. Treasury securities. That should be taken not as an immediate threat but as a shot across the bow indicating how China could retaliate for U.S. tariffs or other trade penalties.

Get ready for an all-out financial war between the U.S. and China.

Germany is also in the crosshairs because of its huge trade surplus. Trump has already torn up the TPP trade agreement and has put Canada, Mexico and South Korea on notice that their trade deals need to be renegotiated.

A full-scale trade war is now upon us. It will shake markets and be a major headwind for world growth. It will get ugly fast and the world economy will be collateral damage.

Today looks like a replay of the 1930s. As Mark Twain reputedly remarked, “History does not repeat, but it does rhyme.”

Next comes the shooting war with North Korea, which will inevitably draw in Russia, China, South Korea and Japan. This will be tantamount to World War III.