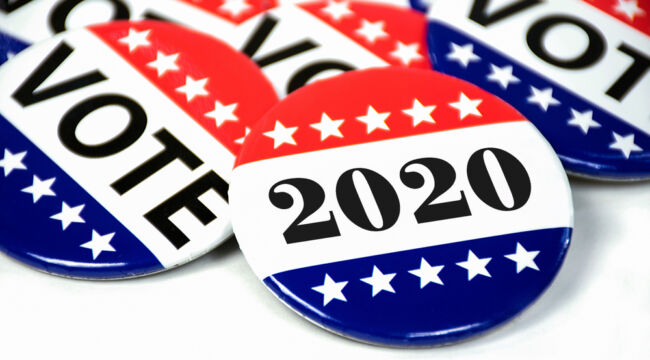 The political climate is fragile and feverish, with the nation amid a crisis that is both fast-changing and unparalleled in living memory.

The biggest change in my election forecast is that Trump’s chances of reelection in November have plunged from 74% (the pre-COVID forecast) to 50% as of today.

This does not mean Trump will lose; he could very well win. But it will be a very close election. Deciding the outcome between Trump and Biden as of now is basically a coin toss. Many factors, some foreseeable and some unforeseen, could tip the balance.

Trump’s strengths are that he is an excellent campaigner, has enormous amounts of mo‌ney for the campaign and seems to have unlimited stores of energy. He also has the power of incumbency, which usually propels a sitting president to a second term.

Trump’s weaknesses are the depth of the New Depression and his handling of the COVID-19 pandemic. Amost no one blames Trump for the outbreak, but many found his response belated and overly optimistic in the initial stages. He did some things right (the China travel ban), but many responses were bungled (defective testing kits, shortages of masks and protective clothing, shortages of ventilators).

In stages, these mistakes were overcome. Masks and protective clothing were mass-produced. Ventilators were surged to those locations that most needed them. New hospital beds were made available through Navy hospital ships and temporary hospitals built by the Army Corps of Engineers. Testing kits gradually became available, although there is still a severe shortage.

Instead of taking credit in a measured way for these positive developments, Trump wasted time in petty disputes with corrupt journalists. Those fights might be OK in the normal political arena, but there’s nothing normal about a pandemic. Trump didn’t seem to know the difference and alienated even his supporters in the process with his pontificating and sideshow antics.

These Trump deficiencies (despite many positive accomplishments) began to show up in the polls.

Large employment losses in states that Trump must carry, especially Pennsylvania, will not help Trump’s chances in November. On the other hand, if Trump can reopen the economy and recover some of these losses, he may benefit from a positive trend even if net losses remain.

What about Joe Biden?

Biden may have pulled even with Trump in the election horse race, but he’s not a sure thing by any means. Before Biden can even turn to the campaign against Trump, he must still try to obtain unity in his own party.

Bernie Sanders withdrew from the race, which essentially guaranteed the nomination for Biden. But will the “Bernie Bros” actually turn out on Election Day? Key components of the Democratic base might not be motivated to vote.

The left wants a Biden administration ban on anyone who has worked on or near Wall Street, the fossil fuel industry, the health insurance sector and the lobbying world, to name a few.

In short, the price that Bernie Sanders’ supporters are demanding from Biden may well make Biden unelectable in key swing states like Florida, Pennsylvania, Michigan and Wisconsin.

If Biden does not embrace the socialist agenda, his lost support from the Sanders movement may make him unelectable for other reasons. Biden is between a rock and a hard place, and the Bernie Bros intend to keep him there in order to pursue their goals.

One way for Biden to appease the Bernie Sanders movement without going all-in on the progressive agenda is to choose a progressive running mate. In the eyes of progressives, the right running mate will be able to “keep an eye” on Biden and pursue the Bernie agenda inside the White House even if the specifics are not shouted from the rooftops.

Here’s a summary of the struggle going on inside the Biden camp regarding a VP choice as reported by Tal Axelrod for The Hill on April 19, in an article titled “Progressives Look for Concession From Biden With Running Mate”:

“Joe Biden absolutely has to pick a progressive champion as his VP pick. He has to unify the party, and that’s the key,” Charles Chamberlain, head of Democracy for America, told The Hill. “What we saw during the primary is… that we have two major factions of this party, the corporate wing, more establishment Democrats, and there is [the] progressive, ascendant left. And he absolutely has to choose from that progressive left to unify the party.”

Biden could pick from a number of progressive women to serve as his VP. Among the most prominent contenders who have been floated are [Elizabeth] Warren and Stacey Abrams, the former Georgia gubernatorial candidate and state House minority leader.

Both have openly expressed interest in the role, with Abrams saying she would be an “excellent” running mate for Biden and Warren confirming that she would accept an offer to be his No. 2.

Amy Klobuchar, the Minnesota senator, has also been mentioned as a leading candidate.

There are others, but these three have gotten the most attention.

But there’s no free lunch for Biden. The choice of Stacey Abrams for vice president would undoubtedly rally progressive and minority voters to turn out for Biden. That’s critical. But it helps Biden in places he is highly likely to win anyway such as California and New York.

Abrams’ ultra-leftist views and strident persona would drive away many moderates in critical swing states such as Michigan and Pennsylvania and possibly tip those states to Trump.

What we have today is a too-close-to-call election and six long months to go before Election Day.

Trump is aided by a solid base and a well-organized campaign strategy. Biden is aided by an electoral vote head start in big states like California and New York and a friendly media that will not criticize his many shortcomings.

The Democrats may hold a “digital” convention and keep Biden under wraps as much as possible until the October debates (where his cognitive decline may be difficult to disguise).

Republicans want to get the economy open for business and show some growth in the aftermath of a second-quarter collapse.

Remember the “Russia collusion” accusations against Trump? The accusation was that he colluded with Russians to interfere in the 2016 presidential election. Trump campaign aides and early appointees such as Gen. Michael Flynn, Carter Page, George Papadopoulos and others were all said to be in on the conspiracy to “steal the election.”

There was only one problem with these claims. None of them were true. Multiple congressional investigations all reached the conclusion that there was no merit to the claims. The two-year, $30 million Mueller investigation found no evidence of Russian collusion by Trump or his team.

Multiple internal reviews and inspector general reports not only found no collusion, but also revealed extensive wrongdoing by the FBI and the U.S. intelligence community when it came to false representations, doctored reports, illegal surveillance of American citizens and other egregious abuse of constitutional rights.

Well, a day of reckoning may be coming soon. U.S. attorney John Durham has been conducting a multiyear investigation of his own at the request of the U.S. attorney general, William Barr. This investigation targets the wrongdoers in the Obama administration Justice Department, intelligence community and diplomatic corps.

Guess what? Joe Biden has been listed as someone who requested and was privy to these reports, which raises serious questions.

The Durham investigation is criminal, so a wave of indictments and prosecutions may be coming soon. The exact timing is uncertain, but mid-July seems a likely date for announcement of the results of the investigation and any indictments.

Attorney General William Barr said Monday that he doesn’t expect criminal charges to be filed against Biden (or Obama). But Biden’s involvement in the Russiagate scandal could have implications for the election. We’ll see.

Investors have their hands full today dealing with the Wuhan virus, the new depression and an unsteady stock market. Now you can add legal fireworks to the list of things that may disrupt markets.