The New Monetary Accord No One’s Talking About

The currency wars started in 2010 with the weak Chinese yuan. Barely a week went by without Treasury Secretary Tim Geithner complaining about Chinese currency manipulation and the weak yuan.

By 2011, China was doing better and the U.S. was stuck in a rut of low growth coming out of the 2008–2009 recession. This necessitated a weak dollar to give the U.S. economy a lift in the form of higher exports, more jobs in the export sector and more inflation due to higher import prices.

Currency wars involve devaluation of your currency as a form of monetary ease. Devaluation is what you do when you can’t get growth any other way.

The problem is that not everyone can devalue against everyone else at the same time. It’s a mathematical impossibility. So you have to take turns.

This was good news for the U.S., but another one of the five families was suffering — Japan.

Japan needed help desperately, and set out to get it by continuing the currency wars. In December 2012, Prime Minister Shinzo Abe announced an economic program to revive Japanese growth.

This was called “Abenomics,” and it had three “arrows,” which were monetary policy, structural reform and fiscal policy. Monetary policy was explicitly intended to cause a weak yen.

While China, the U.S. and Japan had taken turns with a cheap currency from 2010–2013, Europe was suffering with a strong euro. This was the period of the recurring Greek sovereign debt crises. Europe also had two recessions along the way. By 2014, it was time for the cheap euro.

This was accomplished in two stages. In June 2014, Mario Draghi and the ECB moved to negative interest rates. Then in January 2015, Draghi introduced “euro QE” which was an expanded form of money printing.

The euro promptly fell to an interim low of $1.05 in January 2015, and has fallen close to that level several times since.

As was the case with the other devaluations, the European economy got some relief. We stopped hearing about the Greek crisis after the summer of 2015.

Although the currency wars were ongoing, they were being managed successfully by the five families. This is how the Mafia operates when there’s peace; everyone gets along with everyone else, even with an undertone of mutual distrust.

But in the summer of 2015, a new war broke out among the five families. China went rogue and tried to cheapen its currency without consulting the others in advance. On Aug. 11, 2015, China launched a shock 3% devaluation of the yuan in one day.

We all know what happened next. U.S. stock markets plunged. By late August, stock investors were staring into an abyss.

The Federal Reserve immediately backed off its plan to hike rates (so-called “liftoff”) in September. The rate hike was put on hold, and a relief rally in U.S. stocks began.

China used the Fed’s rate hike as air cover to cheapen the yuan again. This time, they did it not on a shock basis but on a stealth basis. China moved the yuan lower in small steps day after day. Markets were not fooled. Market participants could see yuan was going down and immediately discounted further devaluation. 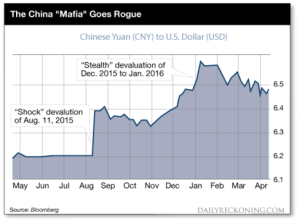 The Fed rode to the rescue again. Officials such as New York Fed President William Dudley gave a series of dovish speeches, and the Fed took a March interest rate hike off the table. Once again, U.S. stocks began a relief rally. From mid-February to mid-April, the damage of the January meltdown was undone and stocks recovered, thanks to the Fed.

But the game was getting dangerous. How many times could the Fed bail out the stock market? How long would the Chinese play with fire by devaluing the yuan?

In fact, China needed a cheaper yuan. The Chinese economy is the second largest in the world. It’s coming in for a hard landing. Years of wasted investment, asset bubbles, debt accumulation and corruption were coming home to roost.

The Chinese yuan had been getting stronger since 2011 as the U.S., Japan and Europe took turns cheapening their currencies.

It was China’s turn for a weak yuan. Enter the Secret “Shanghai Accord”…

This was the state of play as the heads of the five families gathered in Shanghai, China, on Feb. 26 of this year. Technically, this was a G-20 meeting of finance ministers and central bank officials.

But formal G-20 and IMF meetings are used to conduct informal private meetings on the sidelines. The G-20 meeting in Shanghai was the perfect cover for a “sit-down” of the five families, led by the boss of bosses — Christine Lagarde.

The U.S., China, Japan, Europe and IMF all agreed that China needed some relief. The world’s second-largest economy cannot go down without taking most of the world with it.

For that matter, the U.S. was weakening also. Real GDP growth in the fourth quarter of 2015 was an anemic 1.4%.

The estimate for the first quarter of 2016 from the Federal Reserve Bank of Atlanta is 0.3%, close to recession levels. Not only are both quarters extremely weak, but the trend is downward.

The U.S. looks like it is heading into a recession. Even if a technical recession is avoided, this weak growth in the world’s largest economy has ripple effects that will drag down the global economy.

With China and the U.S. both weakening, it was time for another change in the currency wars.

The problem was how to weaken the Chinese currency without crashing global stock markets. Lagarde did not want a repetition of what had happened in August 2015 and January 2016.

The purpose of the sit-down in Shanghai was to come up with a plan to give China relief without causing a global panic.

The “GDPNow” real-time forecast from the Federal Reserve Bank of Atlanta shows U.S. growth in the first quarter of 2016 at 0.3%, very close to recession levels.

Traders were obsessively focused on the yuan/dollar cross rate (the ticker symbol for this is CNY/USD). If CNY/USD could somehow be left undisturbed, markets might not notice immediately what was being done.

The solution was to take action in the U.S., Europe and Japan while China did nothing. This was the heart of the Shanghai Accord.

Europe and Japan would both tighten policy and strengthen their currencies. The U.S. would ease policy and weaken the dollar. China would maintain their dollar peg so CNY/USD would be unchanged.

A stronger euro and yen is the same thing as a weaker yuan, from China’s perspective. China has a larger combined trading relationship with Europe and Japan than it does with the U.S.

Relief for China from a strong euro and strong yen is significant. At the same time, a weaker dollar means a weaker yuan if the peg is maintained. China is just “along for the ride” as the Fed trashed the dollar.

That’s the essence of the Shanghai Accord. China does nothing but gets a major devaluation in the currency wars, and no one notices because CNY/USD is steady. Voilà.