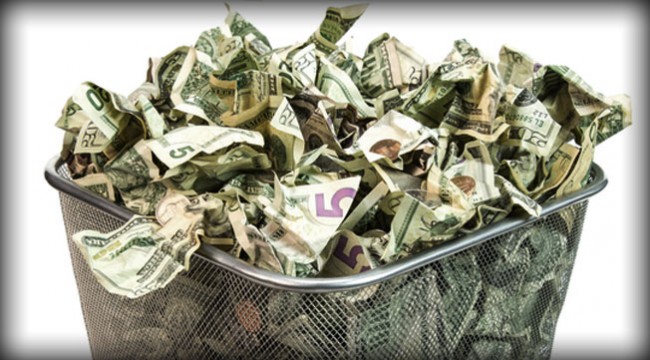 I was a small child when America’s coinage began to be debased in 1965. My dad was a coin collector who fastidiously filled blue coin books with old coins. I remember being especially intrigued by the 1943 steel penny. During World War II, my dad explained, the country was short on copper, and the Mint used steel to make pennies instead. Actually, it turns out it was zinc-coated steel.

Wikipedia tells us that the steel cent is the only coinage that can be picked up with a magnet. Not exactly a requirement for a good money. It is also the only coin in circulation that didn’t contain any copper. Even gold coins had a little copper back in the day.

Now the country is engaged in wars around the world and here at home: the war on terror, the war in Afghanistan, the war on drugs, the war on obesity. The government is constantly at war. As you might expect, valuable resources are needed, and the integrity of the coinage must be sacrificed just as it was for WWII.

To solve this problem, Congressman Steve Stivers (R-Ohio) introduced H.B. 1719 — the “Cents and Sensibility Act” — on April 24. It mandates that pennies, nickels, dimes, and quarters be composed primarily of steel, specifically U.S.-produced steel. By the way, this is the third time Congressman Stivers has pitched this legislation, and as GoldSilver.com reports, “Conveniently, Worthington Industries, a steel processor that supplies steel blanks for Canadian currency, is located in Stivers’ district and strongly supports the bill.”

We can only be thankful that a plastic button fabricator doesn’t operate in the good congressman’s district.

This sort of thing isn’t new. Kings used to “clip” and “sweat” coins constantly to pad the government treasury. Coins would be called in and filed around the edges, with the resulting loose metal coined into new currency for the government to spend. This practice has gone the way of the buggy whip, with the Federal Reserve conjuring up billions from the ether with the ease of a keystroke.

When you think about it, government would like to get out of the production of coinage altogether. The government is interested in earning what’s known as seigniorage — the difference between the value of money and the cost to produce it. It’s estimated that the cost of producing a $100 bill is 8-12 cents: Now that’s some seigniorage.

On the other hand, the government actually loses money creating pennies and nickels. According to GoldSilver.com, “As of May 8, a penny contains one-half cent worth of metal; nickels contain 4.6 cents. Factoring in production costs, the U.S. Mint reported that a penny cost 2 cents and a nickel cost 10 cents to manufacture in 2012.”

So while Stivers has failed before with his steel currency bill, its time may have come. Washington is swimming in red ink, and according to the House Financial Services Committee, the government would save up to $433 million over a decade by switching metals. Besides, carrying around a pocketful of change is as foreign to young people as reading a paper-and-ink newspaper.

It’s questionable whether the government would save money minting steel pennies, but this might be a step toward getting rid of pennies altogether, an idea that is constantly floated. To completely abandon the lowest denomination of currency is the ultimate surrender to inflation.

According to the folks at RetireThePenny.org, the average American wastes 2.4 hours a year handling pennies. This includes “the ubiquitous 30-second period we sometimes spend waiting for someone who just has to dig through their pockets or purse to find that last cent so they can pay for something with exact change (probably so they don’t get stuck with any more pennies),” writes Susan Headley at About.com.

David Owen wrote for The New Yorker back in March 2008, “More than a few people, upon finding pennies in their pockets at the end of the day, simply throw them away, and many don’t bother to pick them up anymore when they see them lying on the ground. (Breaking stride to pick up a penny, if it takes more than 6.15 seconds, pays less than the federal minimum wage.)”

The minimum wage was $5.85 in some states when the article was published. Now it’s even less worthwhile stopping for a penny with the minimum at $7.25 and more in many states. However, if the penny was minted from 1909-1982, its current melt value is 2.1 cents, so it would be worthwhile to pick up the penny. However, what are the odds that a random penny will be pre-’82?

Just like with the silver dollar, the silver certificate, silver dimes, and copper pennies, eventually Mr. Stivers (or another public servant) will have his way. Then zinc, nickel, and copper will be gone from all coinage. And when that happens, there will be an interesting, and unintended, consequence.

Government has been degrading money for centuries. It will not stop anytime soon. But hopefully, you have enough saved to help keep ahead of the government’s money machine.