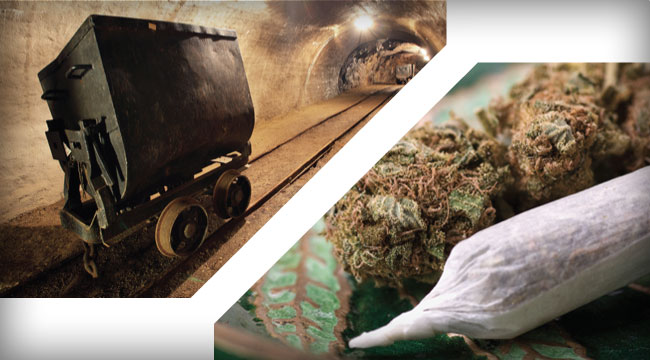 Summer is a dead time of the year for natural resources and shares of the junior exploration and mining companies. With no drill hole results to announce, the shares do nothing, and investor interest is already nonexistent. Agora said adios to its financial conference in Vancouver after last year, handing it to Rick Rule’s Sprott group.

Rule told attendees that the San Francisco and New York mining shows are now kaput, and Cambridge House, a large conference company in Canada, has begun re-branding its conferences, emphasizing the technology and marijuana businesses. Rule joked that unlikely mining, pot business directors, and management actually know something about the product, and it’s being tested on every street corner in Vancouver.

The switch from gold to ganja is understandable. From 2010 to 2014, GLD, the yellow metal’s ETF, has dropped by a third. The XAU gold miners index has dropped 60%, and the junior mining index (GDXJ) fell 76%. The legalization of marijuana is all the rage.

“The legalization of marijuana is all the rage.”

So is now the time to join the crowd and give up on junior resource investing? A slide from Brent Cook’s presentation asked “Why?” Only one in a 1,000 prospects becomes economic (meaning a deposit over 100,000 ounces), and only one in 10,000 becomes a Tier 1 mine with more than 4 million ounces. Below those daunting odds, a picture of a rock hammer was juxtaposed with the face of Alfred E. Neuman. Geology versus industry.

Miners tried to make it up in volume, with tonnes mined up over 100%. However, the average grade has been cut in half, and Cook made the point deeper deposits require higher grades and more drilling (increasing the cost).

Back in 2000, the average mine went from discovery to production in 10 years. Now that timeline has doubled due to social, political, environmental, technical, and financial issues.

Copper is not any better. There have been a hundred copper discoveries since 1988, but only 10% have been put into reserves, and grades for the red metal have dropped 30%.

So how do miners stay in business? They have been extracting the highest-grade ore they can to keep the lights on, but that has made the remaining lower grades uneconomic. Exploration budgets have been axed, along with field geologists and engineers. Mines in development have been slowed down.

Fewer and fewer large deposits have been found, and of those discovered since 1950, less than half are in production. And as far as new deposits being created, anomalies take thousands of years to form. But as Cook explained, “Every deposit is a geologic anomaly [but] every geologic anomaly is not a deposit.”

Sticking the drill in the right spot of a complex mineral system is beyond tricky business. The legends that Rick Rule assembled to discuss their serial successes all mentioned luck as one of the keys to their success.

Casey Research’s Louis James quoted his boss Doug Casey as saying, “Mining is a crappy business. It’s a 19th-century choo-choo train business.” Nobody in the world wants a mine in their backyard. Why would anyone want to invest in such nonsense? “Go home,” James said. “It’s early in the morning.”

But Rule, Casey, Cook, and James say now is the time to invest in natural resource plays, not run for high-tech or a product to get high with. Cook concluded that the major miners are struggling to survive and they are wasting their futures.

What that means is it won’t be long before we have a worldwide mine deficit. And right now, investors can own the best companies with high-margin mines for cheap. Cook repeated a mantra of Rule’s that mining is cyclical. When everyone wants off is exactly when to jump on the cycle. This is the time when the seeds for 10-baggers, 20-baggers, even 100-baggers are planted.

James told the crowd we know who have made the big discoveries, and their shares are still inexpensive. No need to wade through the frauds and hucksters with pie-in-the sky stories lurking to burn holes in your wallet.

A version of this article appeared here before, on lfb.org.

Ed. Note: What happens when you put the brightest minds in the monetary metal industry in the same room? Readers of Laissez Faire Today knows what happens. They got a chance to get exclusive access to this conference. But that’s just one of the opportunities given to them as email subscribers. Click here and join the growing club.