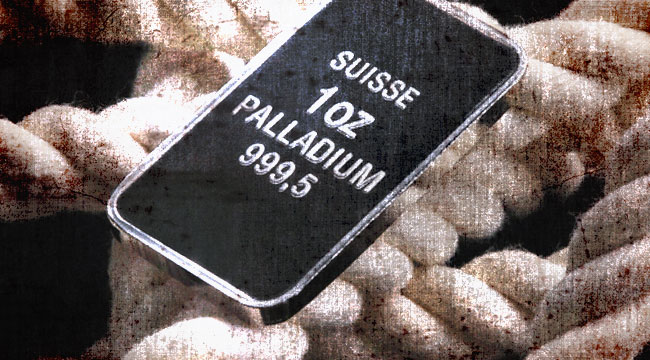 Metals Prices Are Down? Tell That To These Guys...

“Police in one New Jersey city are warning about a rise in catalytic converter thefts in vehicles at train stations, schools and other areas” New York’s Fox 5 reports.

Byron King, our globetrotting geologist, passed the story along earlier this week — it points to an ongoing trend among thieves: forget gold, steal platinum!

Today we’ll take a look at why both metals may fall short to a dark horse in the precious metal race. And no, I’m not talking about silver…

“The thieves are targeting larger vehicles” the news report continues “especially SUVs like the Jeep Cherokee. Police say that’s because the converters are larger and contain more platinum, which is currently valued on the open market at approximately $1,500 per ounce. They are also easier to crawl under to get to the converters.”

Catalytic converters contain a substantial amount of platinum — anywhere from $100-400 bucks worth. When pollutant-filled exhaust from your car’s engine passes through a platinum-lined catalytic converter, the final emitted product is less harmful to the environment.

So you see, even with a general pullback in metal prices, thieves are still hot on the trail of exhaust pipe components. If metal prices are down, no one told these thieves!

But a closer look at the details and you’ll realize that these street-thugs may be on to something. Fact is, the price of platinum is slightly higher than it was this time last year — that’s a far cry from the fallout in the gold and silver market.

More important, platinum isn’t near as promising as the metal we’ll cover today…

What’s the Most Promising Precious Metal?

Palladium in particular is the best performing metal by far, year over year. And the reason is simple:

Considering gold, silver, platinum and palladium, it’s clear that the most “industrial” metal is palladium. Over 91% of palladium goes into industrial processes, namely catalysts like catalytic converters.

Indeed, it’s no wonder when you look at the past year’s performance — what, with the divergence of precious metals from the S&P — that an industrial metal like palladium would be the highest gainer in the group. Palladium prices are up over 21% year over year — unlike the 15% drop for gold or the 24% drop for silver (platinum is holding on to a 1% gain.)

Today, instead of creeping into the seedy underbelly of the black market through auto-catalyst thievery, there is a way that you and I can play this palladium trend on the up and up.

An Easy Way To Play Palladium — No Miners Needed!

Incidentally the same way to play this trend goes back to a company I highlighted last week.

While on a gold mining trip in Nevada I noticed a stream of unrefined metal heading to Salt Lake City, UT. On a closer look, I found that the major refiner in the U.S., is an outfit by the name of Johnson Matthey Gold & Silver Refining in Salt Lake City.

The parent company of this outfit is Johnson Matthey PLC. (JMPLY.) Along with gold and silver exposure, this company is also a huge, global refiner of platinum and palladium. And better yet, the company is a giant player in the catalytic converter industry.

Looking at the company’s global position they hold the top market share for light duty catalytic converters in Europe, China, India, Southeast Asia and South America (they’re also #2 in the U.S. and #3 in Japan and Korea.) When it comes to heavy duty catalysts — important to the palladium trade — it’s a similar story: #1 in Europe, South America, China, India and the U.S. (still #3 in Japan/Korea.) The company also holds the top spot in “non-road” catalysts, which includes heavy equipment for mining or farming, etc.

What’s the outlook like for heavy duty and non-road catalysts? Take a look at this forecast:

China and Eastern Europe are set to propel the heavy-duty and non-road catalyst market into high gear. According to data from JD Power and Johnson Matthey, total sales for the industry are set to grow over 17% per year. That’s a growth story if I’ve ever seen one.

Plus, if you look at the supply demand picture for palladium, you’ll see there’s plenty of reason for prices to head higher.

Some back of the envelope math tells us that there’s a lot more demand than there is mine supply. Even when you add in the recycled palladium (2.28 million ounces in 2012) the market was still experiencing a deficit over one million ounces.

Simply put if the economy and demand for auto catalysts continues gaining strength and even a fraction of the emerging market demand that Matthey forecasts comes online, there’s a strong case for skyrocketing palladium costs.

Add it all up and Johnson Matthey is the elephant in the room when it comes to playing global growth in catalytic converters — and when you add in the company’s refining capability, it’s a great way to play palladiums rise.