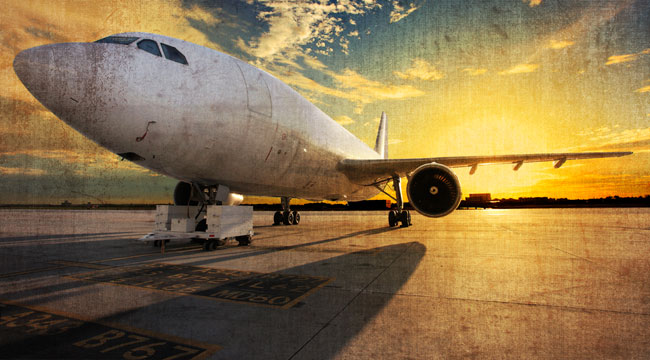 By now you’ve probably seen at least some of the wall-to-wall media coverage of the Asiana Airlines flight 214 crash at San Francisco International Airport (SFO) on Saturday.

In fact, the tailstrike was about 1,300 feet short of the designated threshold of the runway. Thus, it’s not unfair to say that — to use an old Navy expression — the landing approach of Flight 214 was totally hosed.

The Boeing airplane slammed hard. It skidded down the runway while spinning in what’s called a “ground loop.” All manner of things tore away from the fuselage, including the tail section, landing gear and engines. Here’s part of the tail section, for example. 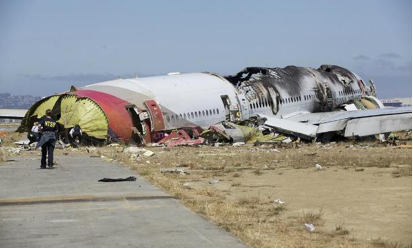 It’s both a tragedy and a story of heroism and cool-headed action under pressure. But what has received little attention so far is the number of innovative materials in the Boeing 777 that helped so many of its passengers survive. Almost all of that advanced technology came from defense research, which leads us to today’s topic.

Hidden in the burnt wreckage are a number of stunning advances in military technology, namely the increasing use of advanced metals and carbon composites in aircraft design and construction. Without these “miracle materials,” whose origins lie in Cold War-era military research, the SFO crash could have been far worse.

Looking at initial reports of the crash timeline, we can already point to how some of these former defense-tech breakthroughs performed under stress.

From what we know, including official statements from the NTSB, the Asiana Boeing 777 came in to land at SFO low and slow, sad to say. The tail of the aircraft hit the rocky sea wall at the end of the runway.

Inside the aircraft, however, seats remained affixed to the floor. According to Boeing specs, the seats are designed to absorb 16 Gs of force, and the floor mountings can take 9 Gs. Thus, in this case, the seats didn’t “pancake” together and injure or trap passengers. 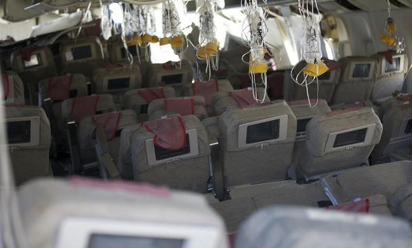 Immediately after the crash, the fuselage of the aircraft was essentially intact. The right engine was burning, but evidently, fuel tanks didn’t rupture and there was no fireball. Passengers and crew had precious moments in which to evacuate — with a few people even lugging their carry-on bags (not recommended!). 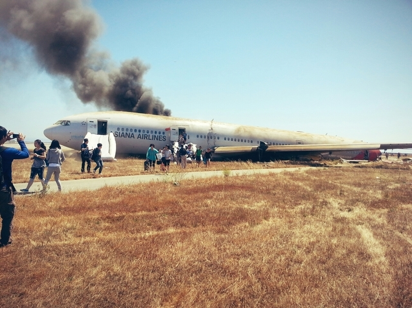 Bystander’s shot of passengers and crew evacuating crashed B777.

The takeaway here is that the B777 fuselage maintained structural integrity. It absorbed the energy of the crash, but didn’t tear apart.

As the photos show, the aft, lower section of the aircraft crumpled and flattened, but the passenger section remained more or less intact. Fuel remained contained inside designated tanks and bladders. Passengers and crew had time to evacuate, while rescuers even had time to enter the aircraft to assist.

What was the secret to survival in this crash? Well… many things, including luck and grace. But much of the credit also goes to “miracle materials.” Basically, when Boeing designed the B777 in the early 1990s, it used advanced alloys and carbon compounds in critical structural applications.

Look at this diagram, based on an article by Brian Smith of Boeing in the September 2003 issue of Advanced Materials & Processes. The B777 fuselage is built out of advanced aluminum alloys (light blue and pink). Wing structures make extensive use of titanium alloys (dark gray). The cabin floor and floor supports, as well as vertical fin and horizontal stabilizers in the rear, are made out of carbon-fiber reinforced plastic 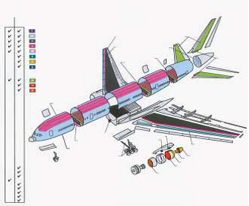 Schematic of advanced materials on B777. Boeing Co. Photo.

In essence, the B777 represented a 1990s-era breakthrough in material applications for commercial aircraft. The B777 incorporated metal alloys and carbon products from earlier defense systems (including, for example, the B-2 bomber) and brought new levels of strength and design concepts into the commercial arena.

The B777 highlighted how, in the 1990s, critical Cold War advances in material technologies had finally matured. Things were at the point where Boeing designers aligned new material concepts with commercial applications, while at the same time meeting the needs of airline customers for passenger safety and overall affordability.

Looking Ahead From 20-Year-Old Tech

Another way to look at it is that the B777 that crashed was constructed in 2006 using 20-year old materials technology. Yet as the outcome demonstrates, this type of airplane is a robust, safe design that can take a horrible beating and still keep almost (sigh…) everyone alive.

Newer aircraft spec materials — such as with Boeing’s B787 Dreamliner — are even stronger. That, and overall design philosophies and capabilities have improved to include more and more safety features from the inside out.

I didn’t publish MTA last week, due to the Independence Day holiday. Thus, there’s plenty to discuss today, just based on the fast-emerging news of the Asiana crash. I’ll have more for you soon, specifically on an investment idea for new, advanced materials that will be stronger than what we see in the B777 or even the B787. Have a good week.