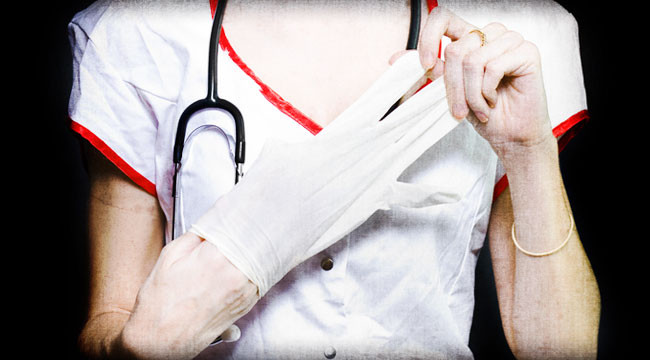 Liberty Gets an Enema

The story is so horrifying, we can only resort to dark humor to begin today’s episode: Whatever you do in life, don’t run a stop sign in Deming, N.M.

David Eckert did precisely that on Jan. 2 of this year. A cop pulled him over right away.

It might renew your faith in humanity to know that the first doctor police asked to perform a cavity search refused. Then again, others agreed.

“Shannon Renee McNeal, was torn from her screaming children by police who were seeking a woman with a similar name,” reports the St. Louis Post-Dispatch — “a woman who they should have known had been murdered seven months before.”

Ms. McNeal’s ordeal likewise began with a “routine traffic stop” on a day she was taking her kids to the zoo. The dead woman for whom she was mistaken had been wanted on an outstanding drug charge. “Two routine fingerprint comparisons,” the Post-Dispatch continues, “showed [McNeal] was not the person wanted, but she was booked anyway in a humiliating process that forced her to shower in front of two female guards and be sprayed with a delousing solution.”

She spent more than a day in custody. Then her employer found out about her arrest and fired her. Then she lost her car and her home and had to move in with friends.

The newspaper found that over the last seven years, more than 100 people have been wrongly arrested in St. Louis, and it took an average of three weeks to clear up each mistake.

The city has begun a top-to-bottom review to clean up and reform the system to prevent such outrages in the future.

Just kidding. “There’s almost always complicity on the part of the person who spent more time [in jail] than they should have,” says Eddie Roth, an aide to the mayor of St. Louis. “I worry about a lot of things. I don’t worry about this.”

It’s not just the police-state stuff that might make you shake your head and wonder what the country’s coming to. Consider something as simple as the vegetables you might buy from a local farmer’s market.

Much like Obamacare, Congress passed a “food safety” bill in 2010 whose impact is only now starting to make itself felt. We warned at the time the Food Safety Modernization Act could destroy small farmers.

The law includes an exemption on operations with annual sales of less than $500,000. But as the FDA draws up the regulations to implement the law, the devil is starting to emerge from the details. “The proposed rules as currently written,” writes Tom Philpott at Mother Jones, “represent a significant and possibly devastating burden to small and midsized players.

“The new law’s less-than-$500,000 exemption applies only to farms that sell at least half of their produce directly to consumers. But a growing number of small farms earn a significant amount of their income selling to third-party local enterprises like food hubs and food co-ops — and if revenue from those sources exceeds half of total revenue, these farms would lose their exemption and become subject to costly requirements.”

Worse, the compost and manure rules would have the effect of “making the fertility programs that drive organic farming essentially illegal,” Philpott continues. “In a recent national survey by the Organic Trade Association and the Washington State Department of Agriculture, 55% of respondents said the manure rule would prevent them from maintaining their current crop rotations and crop diversity.”

“‎Bad men need nothing more to compass their ends, than that good men should look on and do nothing,” wrote John Stuart Mill.

But sometimes good men speak up and evil prevails anyway. Thus has Drudge picked up the story of William Binney. You may already know about Binney’s chilling warning of “a turnkey totalitarian state” enabled by the NSA’s massive new Utah Data Center.

Mr. Binney was a code-breaker who went to work at NSA headquarters in Fort Meade, in Maryland, after the Sept. 11 attacks. He thought he was helping track down terrorists — until he realized “the data that was being taken in was all about United States citizens,” he tells Baltimore’s WJZ-TV. “They’re destroying our democracy is what they’re doing.”

Apologists for NSA spying say Edward Snowden should have “gone through channels” to sound the alarm, instead of going to the media. Binney did exactly that. For his trouble, he was raided by the FBI in 2007. “They pushed their way in with guns drawn and pushed my son out of the way and came upstairs and pointed guns at my wife and me. They took our computers and all the electronic equipment we had.” But he faced no criminal charges; it was sheer harassment.

“I think they’re violating the foundation of this country,” Mr. Binney now says. “The thing that makes this country strong are the rights and freedoms that we have in the Constitution.”

Remember the map of the “Constitution-Free Zone” we ran a while back? The one that says you have no rights within 100 miles of the border or the coastline? Seems the zone is expanding to swallow up all of us.

No, it’s not the same country it used to be. And we hope you realize by now nothing you can do at the ballot box is likely to change that.

At this stage, restoring “the foundation of this country” begins one household, one individual at a time — with practical steps to shield yourself from the NSA, to lessen the blow of Obamacare on your family and to shrink your tax bill as much as possible. After all, it’s those tax dollars that enable the feds to do all they do, right?

Ed. Note: Looking for specific ways to establish “practical liberty” at home? In this week’s email edition of The Daily Reckoning, readers were given the opportunity to learn over one hundred tips to “opt-out” of Obamacare, shut out the NSA peepers and get the tax man off their back. If you’re not signed up to receive the daily email… you’re missing out on half of what we publish! Click here to sign up now.

Originally posted in the 5 Min. Forecast