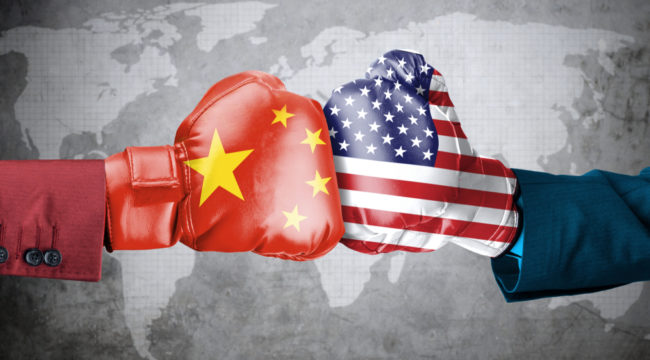 Keep Your Eye on China

The trade war is beginning to take its toll on China as the Chinese economy is losing momentum. Beijing has pledged to increase small-business lending and increase infrastructure investment to help offset the impact.

Ting Lu, chief China economist at Nomura Intl. in Hong Kong, said, for example, “The Chinese economy will get worse before getting better. It takes several months to turn around. Beijing will step up credit easing and fiscal measures to deliver a recovery and prevent financial troubles such as a rise of bond defaults.”

But with a debt-to-GDP ratio of about 250%, China is already well into the danger zone. How much more debt-financed stimulus can it take?

Research by economists Kenneth Rogoff and Carmen Reinhart indicates that debt-to-GDP becomes a drag on the economy at 90%.

There are some real assets to show (their trains are the best in the world) and some growth, but not nearly enough to cover the liabilities that have been created in the form of bank deposits, corporate bonds, “wealth management products,” intercompany loans, etc.

On the other hand, China has enough in hard currency reserves to clean up the mess. China will need hard currency in addition to yuan money printing to handle the external dollar-denominated debt.

The policy issue for China, therefore, is when and how they go about the cleanup. If China moves too quickly, they risk slowing the economy, slowing job creation and delegitimizing the Communist Party.

If China waits too long, they risk an uncontrolled panic and a liquidity crisis, which can grow far worse than the initial problem through contagion. Chinese contagion also has the potential to go global.

Given this dilemma, China is trying a Goldilocks approach of not too fast and not too slow. This Goldilocks plan has three parts:

1. Keep the problem from getting worse than it already is.

2. Shut down the worst institutions in a relatively transparent “no drama” manner.

3. Play for time with regard to the rest of the financial system and try to grow out of the problem.

Will China be able to pull off this Goldilocks approach to a potential credit crisis? Of course not. Nobody’s that good or that lucky. Still, the Communists will try and may be able to keep the greatest Ponzi scheme in history afloat in China for another year or so.

The endgame is still a financial crisis that the Chinese won’t see coming. In that case, China’s only solutions are to close the capital account, devalue the currency, nationalize the financial sector and put the malefactors in jail.

This story is getting worse because of the escalating trade war that shows no signs of letting up. On top of it we now must add an emerging-markets crisis as the crisis in Turkey threatens a spillover.

The problem here is contagion. History shows that once a single nation defaults, creditors lose confidence in other emerging markets. Those creditors begin to cash out investments in EMs across the board and a panic begins.

Once that happens, even the stronger countries such as China lose reserves rapidly and end up in default. In a worst case, a full-scale global liquidity crisis could commence, which would be worse than 2008.

I’ll be keeping a close eye on the situation.

Add it all up and the Chinese financial sector is caught in a vise. The result could very well be a financial meltdown of unprecedented magnitude in China with the potential to go global and cause a market collapse in Europe and the U.S. as well.

In one version of the old Goldilocks fairy tale, she is almost eaten by the three bears but manages to escape the cottage and run into the woods.

It’s not at all obvious the Communist Chinese will be so lucky.