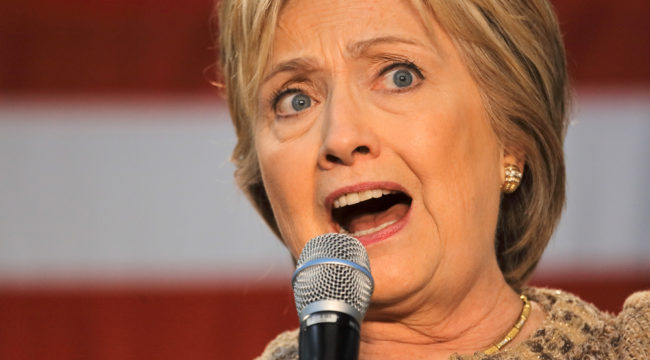 Is Janet Yellen in Bed With Hillary?

(Editor’s note: In observance of Labor Day, we will not be publishing Covel Uncensored on Monday, September 5. We hope you enjoy the holiday!)

Trump is staging a fierce comeback…

Hillary Clinton’s post-convention lead in the polls has nearly disappeared.

Prominent pollster Rasmussen Reports now has Trump leading Clinton 40% to 39%. Trump also has a 45% to 42% lead in the Los Angeles Times poll.

And Hillary’s edge in the polls in which she’s still leading has narrowed sharply.

There’ll be more back-and-forth momentum swings in the horse race to come, but these new polls show one thing: The odds of a Trump presidency shot higher this week.

The Fix Is In

Look, Janet Yellen isn’t going to do anything to jeopardize a Clinton presidency.

They’re both card-carrying Deep Staters. They’re both liberals who served under Obama. They both dress the same: Mao chic. And most of all, Yellen wants to keep her job when her term expires in February 2018.

She’s a lock to stay on in a Clinton administration. But it won’t happen in Trump’s. He’s already told the Wall Street Journal that he won’t keep Yellen as Fed Chair.

I don’t see how Yellen can raise rates between now and Election Day… if Trump can win.

If she did, it would tank the stock market, nail the economy and give Trump the White House.

When the Fed raised rates in December 2015, the stock market plunged, with the Dow dropping more than 1,300 points in the month following.

A plunging market would wipe out trillions in paper wealth and slam the economy into recession.

But Yellen isn’t going to let any normal course of events happen before Election Day, especially since a Trump presidency would be every central banker’s worst freaking nightmare…

Trump is deeply suspicious of the Fed… as many of us are.

He’s rightfully and repeatedly said that Fed policies have created a stock market bubble that will burst.

He told GQ that he prefers the gold standard to a Fed-manipulated fiat currency: “Bringing back the gold standard would be very hard to do — but boy, would it be wonderful. We’d have a standard on which to base our money.”

And he also supports an extensive audit of the Fed to bring transparency and accountability to the secretive “central bank” that’s brought devastating boom-and-bust cycles for decades.

Of course, nobody knows if Trump will follow through on these promises if elected. Once in Washington, he could very well become just another lying politician.

But right now, the last thing Yellen and her New World Order cronies want to do is take a chance on President Trump.

They want to keep their unchecked power to create endless amounts of money out of thin air… their power to build and pop one financial bubble after another… all to redistribute from the little people to the elites… and destroy free market capitalism in the name of State-manipulated Ponzi finance.

So come the next Fed meeting in September, expect a lot of sophisticated talk from Yellen about this or that economic data, assorted indecipherable mumblings, and an army of TV talking heads lapping it all up as if an economic god has spoken.

Just don’t hold your breath waiting for a rate hike… no matter what the economy’s doing.