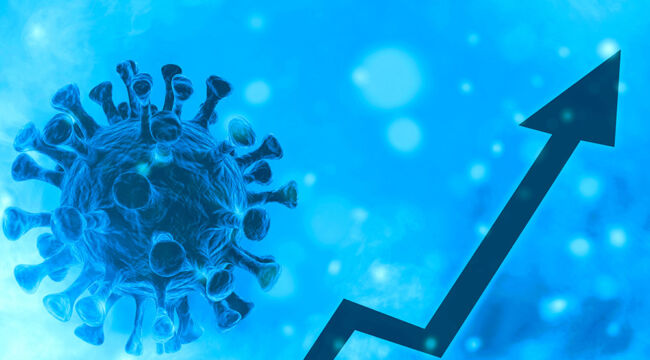 Today was the stock market’s worst day in months, as the Dow lost over 900 points midday. It ended up losing 725 after a late rally, but still a bad day. Fears about a global resurgence of COVID cases and its potential economic impact are being blamed.

Are we headed for another round of ineffective and economically destructive lockdowns? Let’s jump in…

The pandemic is like the proverbial bad penny — it keeps showing up. As recently as June, experts (who have turned out to be not-so-expert) claimed that the pandemic was finally under control.

This did not mean there were no new cases or fatalities. Of course, there were some. It meant that the case rate and fatalities rate had fallen so low that the disease was something we could just learn to live with but did not have to fear. Mask mandates and lockdown orders were things we could put behind us. Life was finally getting back to normal.

Return of the New Abnormal?

Now, all of that happy talk is in doubt. A distinct fifth wave of increasing cases and fatalities has emerged, both in the U.S. and globally. Here in the U.S., the daily caseload has increased from only 3,700 on July 4, to almost 52,000 new cases on July 16, a 1,300% increase.

The U.S. has been averaging almost 30,000 new cases a day over the last seven days (ending Friday), up from around 11,000 cases a day a month ago, according to the CDC.

Fatalities have not increased as dramatically so far, partly because of better treatments and partly because any fatality increase tends to lag the caseload increase. Still, an increase in fatalities is to be expected.

This increase is being blamed on the “Delta variant” of the virus. Notwithstanding a lack of clear understanding of the science behind the increasing caseload, politicians and incompetent public health officials are demanding the same failed policy responses as they did in prior waves.

Authorities in the U.S. and elsewhere are reintroducing lockdowns, quarantines and mask mandates. These useless policies are being implemented in Australia, especially in Sydney.

On July 14, 2021, the Premier of Australia’s New South Wales extended the lockdown of Sydney by at least 14 days.This new lockdown is the latest in a series of lockdowns that have affected Australia’s largest city and financial center.

The Sydney lockdown is currently set to expire on July 30, but the Premier said the lockdown will only be ended when the number of new cases is close to zero.

There’s no assurance that will happen anytime soon. In fact, based on reliable mathematical models of how new outbreaks spread, (so-called waves, which can be local, national or global), no material reduction in the new case load should be expected before the end of August.

Why Do the Most Heavily Vaccinated Countries Report the Most New Cases?

Again, the new outbreak is being blamed on the Delta variant, but this conclusion appears to be more of a name blame game than a solid scientific conclusion. If the Delta variant actually is the cause of an expanding outbreak, it raises doubts about the efficacy of the vaccines being used. (Unlike the U.S., there is no significant resistance to taking the vaccine, what is called “vaccine hesitancy” in Australia).

“In Europe,” he said, “we are seeing surges at many places where most of the population has already been vaccinated. At the same time, the 15 least vaccinated countries don‘t seem to face any problem adding…

“Emirates [has the] highest vaccination rate in the whole world. They just experienced their second highest peak since [the] pandemic began.”

Don’t forget, again, these are experimental vaccines. They’re not vaccines in the traditional sense. These vaccines are more like genetic therapy.

There have been thousands of deaths and at least tens of thousands of sometimes serious side effects reported from these vaccines. You won’t just hear about it in the mainstream media. It seems like there’s a concerted effort to ban any suggestion that these vaccines could be in any way harmful for some people.

Here at home, Los Angeles County is rimposing indoor mask mandates, regardless of vaccination status. Former Secretary of Health and Human Services Kathleen Sebelius said Americans who refuse the vaccine shouldn’t be allowed to return to work and should face severe restrictions on their freedom of movement.

Whether or not you take the vaccine is your decision. It may prove beneficial for the majority of people. But you should at least be made aware that there are risks involved so you can make a fully informed decision.

Instead, they just keep saying everyone needs to be vaccinated, even kids, who are more likely to die from the vaccine than the virus.

Fauci and the Media Should Follow Their Own Advice

Let’s get back to lockdowns specifically. It’s not just Australia. You can look to South Africa, Europe and Japan. Japan has just banned spectators at the 2020 Tokyo Olympics (already delayed since last year). Now, there might be valuable tradeoffs between economic damage and virus control if these policies worked.

The problem is, the science shows they don’t work. Dr. Fauci and the media are always saying to “follow the science.” They should follow their own advice.

Masks are practically useless, partly because they are not worn properly; they’re made of inferior materials and the virus itself is much smaller than the weave on the mask fabric, which means the virus can easily pass through the mask. It’s like putting up a shark net to keep flies out. Masks are almost entirely symbolic.

Meanwhile, lockdowns don’t work, partly because they confine people to indoor spaces where contagion is much more likely to spread.

Lockdowns also don’t work because all that happens is that you infect people in a confined location (the lockdown zone), instead of another location (where you might otherwise travel), but you still infect people. By the way, there are virtually no documented cases of outdoor transmission. It all happens indoors.

The infected individuals might change, but there’s no net increase or decrease in the total number infected.

But if lockdowns work, why are we on our fifth wave of infections with 607,000 dead in the U.S. alone? Lockdowns do one thing and one thing only — they destroy economies. Yet politicians and bureaucrats continue to push them, despite the evidence.

The bottom line is, lockdowns could be returning to a theater near you. Investors should take note.