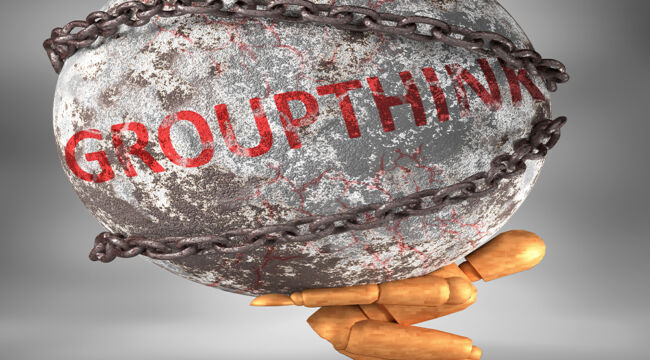 Philosophers and analysts use a principle called Occam’s Razor (sometimes Ockham’s Razor) to solve difficult problems. It says that when you are confronted with two possible solutions to a problem, one complicated and one simple, it’s usually better to select the simple solution.

There’s always some attraction to the complicated solution because humans like intrigue and plot twists. But statistically, the simple solution is more likely to be correct and therefore the one that analysts should prefer unless contrary evidence presents. This approach is useful in dealing with conspiracy theories.

Yes, real conspiracies exist (such as the plot to assassinate JFK), and analysts must be alert to the possibility. But most so-called conspiracies have much simpler explanations that are more likely to be correct.

One of the most potent drivers of coordinated political action is not a deep, dark conspiracy. It’s usually just the result of like-minded individuals cooperating to achieve the same goal.

If the political players all think alike and agree on goals, you don’t need a conspiracy. Just let them go to work every day and communicate with each other, and you’ll get the coordinated result without the inevitable twists and turns of a conspiracy.

For those who may be unfamiliar, “WestExec” is a reference to West Executive Avenue, a non-public road that runs between the West Wing of the White House and the Eisenhower Executive Office Building.

The West Wing is not that large and only has a few choice offices plus the Situation Room, the Roosevelt Room (for larger meetings) and the Cabinet Room, which is smaller. Most officials who say they “work in the White House” actually work in the Eisenhower Building, which means they walk across West Executive Avenue when they have meetings with top Biden officials.

The WestExec Advisors name is a play on that kind of insider status of the long list of former WestExec principals who are now running the country. (Don’t look to Biden as the source of power; he’s not mentally competent and does what the WestExec crowd or the rest of the Biden family tell him to do).

A Threat to National Security

So, with all of this power emerging from one firm, does that mean there’s a conspiracy among the alums to control the world?

Not really. But, it points to a bigger problem, which is the lack of cognitive diversity. The WestExec crowd all went to top schools, had top jobs in previous administrations, exhibit high IQs, and boast lots of credentials.

If you look at their resumes, you’ll see they all went to the same schools, had the same professors and pursued the same career paths. With few exceptions, it’s all Harvard, Yale and Columbia with a small dose of Stanford or Chicago for good measure.

They all went to law school or got PhDs and worked for the same small set of law firms or consulting firms. Then they all worked in a small set of government agencies, including the State Department, National Security Council or the Intelligence Community.

They all think alike. That’s an acute weakness because if they all look at things the same way, they will all miss the real dangers coming that don’t fit into their mental molds. Lack of cognitive diversity is a fatal weakness.

As a leader, you should always be willing to lower the average IQ if it means you can increase the range of viewpoints. At least someone might point out it’s raining to a group that’s too buried in briefing books to look out the window. This uniform mindset is itself a danger to national security. Sooner than later, a threat will arise that none of them will see coming.

On the Verge of the Most Destructive War Since WWII?

And there’s no shortage of threats in the world. Perhaps the most pressing right now is China’s aggressive posturing in East Asia. It’s not just China and the U.S.

The world’s three largest economies — the U.S., China and Japan — may be squaring off for the most destructive and costly war since the end of World War II.

The main protagonists will be China and the U.S. The cause of war will be a Chinese invasion of Taiwan, which may be coming much sooner than the world expects.

China would start the war with an invasion across the Taiwan Strait. The U.S. would be obliged to come to the defense of Taiwan and take measures to disable the Chinese fleet and its air support. But, Japan is no bystander.

A glimpse at a map shows that if Taiwan were in Communist China’s hands, Japan’s own sea lanes would be threatened, including its access to imported oil. Japan has its own island disputes with China. If China were to capture Taiwan, Japan’s islands in the East China Sea would likely be the next to fall.

The U.S. could fall back to a line of islands, including Guam, Hawaii and the Aleutians, but no fallback is possible for Japan. If China seizes Taiwan and the U.S. falls back, Japan would be under the thumb of China, and they know it.

Of course, a fallback by the U.S. would be an enormous blow to U.S. credibility, as well as its economic power. That’s why an alliance of the U.S. and Japan against China to defend Taiwan (along with Taiwan’s own formidable defense capability) is the most likely response to a Chinese amphibious assault.

The question for the world is whether China will get the message and refrain from attacking Taiwan. Unfortunately, signs point in the opposite direction. China has left its non-threatening style of diplomacy in the past.

China has come out of its shell and seeks regional hegemony to be followed by global hegemony. It is aggressively pushing on its neighbors in India, Myanmar, and the six nations that surround the South China Sea. Taiwan is the prize, and China is preparing to seize it.

This attack will be Xi Jinping’s legacy and his attempt to rival the reputation of Mao Zedong. Will Team Biden be able to see it coming?

U.S. investors should not take Chinese restraint for granted. Allocations to cash, gold and U.S. Treasury notes will preserve wealth when the worst happens.