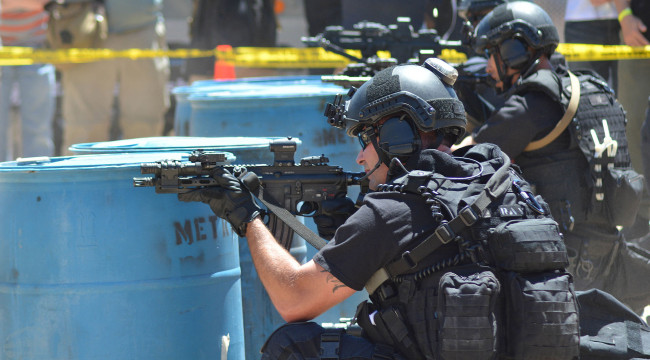 It also has power-tripping lawmen in a city of 120,000… and a dead man whose family has been denied any redress.

Rewind to late 2012: The Abilene, Texas, city council considers an ordinance requiring pawnshops to hold all their purchases of precious metals for 12 days before reselling.

The idea was cooked up by the police department; the rationale is that detectives would have more time to track down stolen property.

Marcus Cass and Charles Camp have a problem with that. They own the Abilene Gold Exchange. Remember, this is late 2012. Gold has been climbing down from its September 2011 highs for more than a year, and in volatile fashion. Twelve days could be the difference between a modest profit or a sizeable loss. Cass testifies in opposition before the city council.

Days later, police start poking around the computer database where pawnshops are supposed to report recent purchases within 48 hours; they find nothing uploaded from Abilene Gold Exchange for the past three weeks. They launch an investigation and get a search warrant.

If it were 40 years ago, the cops would simply show up in uniform, present the warrant and conduct their search. In fact, that’s what the detective in charge of this case wanted to do.

But it’s not 40 years ago, when SWAT teams nationwide carried out an average eight raids a day. Nowadays, they’re deployed an average 137 times a day, according to Peter Kraska from Eastern Kentucky University.

The cops who were present during the city council hearing tell the detective Cass’ testimony was “anti-police.” They point out Cass and Camp are often armed. (How many pawnshop owners aren’t?) They say Camp had a 30-year-old conviction for pot possession. (Clearly a menace to the community.)

What we’re about to describe takes place in the space of seven seconds.

The first cop who enters is in uniform. Charles Camp is in front of the store. He raises his hands and cooperates. Behind the first cop is another in street clothes and a black bulletproof vest. He’s got a badge on the side of his belt, but that’s the only evidence he’s police. Two more officers sweep in, with bulletproof vests marked “POLICE” on the front.

Marcus Cass, meanwhile, is in the back office. Hearing activity in front, he starts to come out. The officer in street clothes and a badge on his belt heads toward the office, gun drawn and extended in front of him.

The gun is the first thing Cass sees in the doorway; he draws his own weapon. Then he sees a gunman in black in black body armor and dark sunglasses; given the angle, he does not see the gunman’s badge.

The officer fires first. Fires twice. Before he can get off a shot, Cass drops his gun and slumps to the floor. He dies.

“So to ensure ‘officer safety,’ these cops employed tactics that have a very low margin for error, and that unless executed flawlessly would risk making them appear to their suspects as if they were armed robbers,” writes Radley Balko at his Washington Post blog “The Watch.”

Cass’ widow, children and mom sued the City of Abilene, the police chief and the officer who shot Cass dead. On Wednesday, a federal appeals court dismissed the case.

Going by the letter of the law, the decision appears mostly sound; Mr. Balko’s blogpost pulls apart a lot of nuance to the case our 5 Mins. don’t allow for. But as he sums up, “It’s the law that’s the problem.”

Even the judges, in a footnote, rapped the city’s lawyers for insisting there was nothing unwise about the raid — “which suggests,” says the court’s opinion, “that nothing will be done to prevent a repetition of this tragedy the next time APD needs to inspect the records of a business whose owners are known to be armed.”

Just remember, an average 137 SWAT raids a day nationwide. They can’t all be inner-city drug dens…