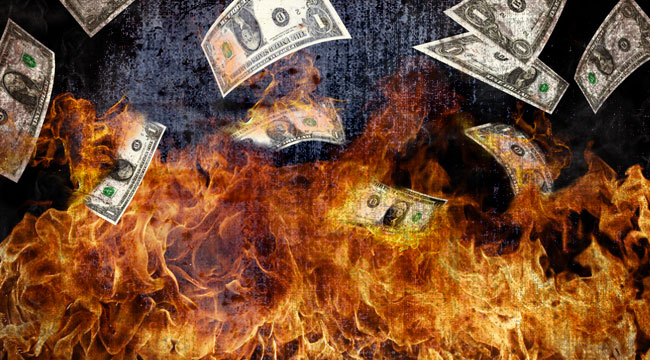 Where things stood at the close of last week: Dow down 105, gold up $9 an ounce.

Those who think the world is warming up should visit Edinburgh. It is a city made of stone. Yellow stone. Brown stone. Almost-black stone. Almost every building is built of stone. And the entire city sits on a rock…

The lithically minded visitor is delighted. He can admire stones all he wants.

But the global warming enthusiast would have been disappointed with this past weekend. Even the stones shivered. In mid-June, the days are as long as arctic nights… and just as cold.

Yes, the chilly wind whipped down the Royal Mile and kept going for many miles more. The rain came down at an angle. Tourists bent into it trying to keep themselves moving ahead. Wrapped in sweaters, scarves, hats, and coats, they crowded into the castles and the tea shops.

The poor North Americans didn’t know what had hit them. In their shorts and T-shirts, they must have wondered if they had gone through some strange time warp. They were not six hours ahead of the time at home… they were six months ahead. It felt like bleak December, not sweet midsummer.

Can the Fed Turn off the Money Tap?

“Of course, the big concern everybody has now is how we are going to get out of this,” said Gillian Tett.

We found ourselves onstage on Friday with Gillian, an assistant editor at the Financial Times. She was not talking about getting out of Edinburgh or avoiding the inclement weather. She was talking about QE and ZIRP, the Fed’s EZ money policies… which currently increase the U.S. monetary base about 100 times faster than the growth of the economy.

The occasion was the annual financial luncheon put on by the Prince’s Trust in Edinburgh. The committee had asked Gillian… and your editor… to speak.

You already know what your editor said. He pointed out that central banks’ monetary policies had become a kind of financial doomsday device.

Hold the button down too long and it is almost impossible to stop. Because the longer the Fed hands out the cheap credit, the more zombies get in line to take advantage of it.

As time goes on, more and more people want to see the program continue… and fewer can survive if it doesn’t.

Some rely on ZIRP to roll over their debt.

Some count on low mortgage rates to build, sell, or buy houses.

Some depend on the Fed to finance government deficits and keep money flowing to the growing zombie class — including banks, Wall Street, disabled people, food stamp recipients, military contractors, retirees, and chiselers, layabouts, and schemers of all sorts.

Almost nobody wants to turn off the tap.

The Rocky Road to “Normalcy”

Gillian had a more measured outlook.

“I met with Alan Greenspan and Paul Volcker in Washington last week,” she began.

That must have been interesting, we thought. A real contrast. An honest, stand-up guy and a snivelly schmuck together in the same room.

“The real issue on everyone’s mind is the same. How can you get back to normalcy? Debt levels will have to go down. It will have to happen someday. But how?

“The good news is that it can happen without a major calamity. It’s already been done once — after World War II. Back then, average sovereign debt-to-GDP levels were nearly 100%.

“What happened then was also a form of repression… but it was barely noticed. Inflation rates rose while bond yields remained low and the economy grew. This had the effect of reducing the real value of debt without triggering an economic shutdown.

“This was not the intended or expressed goal of central bankers at the time. But the result was that much of the war debt was inflated away. Debt levels went to normal levels after a few years. And then interest rates could rise.”

How about that, we thought to ourselves. The Fed was successful by accident. Probably the only way it has ever been successful. Gillian went on…

“The calculations I have seen suggest that the same thing could happen now. But it will take at least seven years to achieve this sort of ‘soft landing.’

“The trouble is, landing a plane over a seven-year period is a very difficult thing to do. There are two presidential election campaigns in that period. It is hard to imagine that the economy, the markets, the Fed, and the federal government will be able to keep themselves headed in the right direction for that long. It would be nice to think this soft landing could happen. But I don’t think it is very realistic.”

Gillian didn’t mention it, but the “soft landing” she described could only happen if the pilot were willing… and able.

Ben Bernanke and his team are neither.

As we pointed out in our talk, the last time the Fed voluntarily achieved a landing of any sort was when Paul Volcker was at the controls.

Volcker was an exceptionally confident and courageous Fed chief. And President Reagan had his back. Even so, it was a close run. The economy went into the worst recession since World War II. So great was the pain… and so intense the furor against Volcker… that he was burned in effigy in Washington.

Mr. Bernanke, had he the brains and cojones to “pull a Volcker,” would probably be burned in New York.

(Nobody seemed to get the joke in Edinburgh, either.)

But anything is possible. And as we pointed out on Friday, Mr. Market is an exceptionally unpredictable dude. Just when you think you have him figured out, he will sneak around behind you… and do something entirely unexpected.