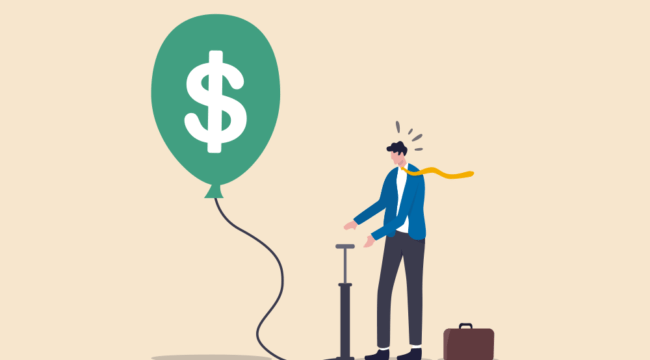 Please take aboard these three suppositions:

Supposition 1): An economy’s production of goods increases 12% across one year.

Supposition 2): Its money supply blooms at the identical 12% rate across the same year.

Supposition 3): Demand for goods and supply of goods balance in perfect equilibrium.

Now stack suppositions 1,2 and 3, one upon the other. What should you expect?

You should expect no general increase — or no general decrease — in the price of goods.

That is, all scales should roughly balance. The widget that fetched $10 last year fetches $10 this year.

Here you have the very model of “price stability.”

Now answer this question: What is the inflation rate in our example? Is it zero?

Answer shortly. First, to the scene of an inflation that is very nearly obscene, an inflation flaunting all rational description — the stock market.

An overall hush descended upon Wall Street today. A dull affair, by all standards.

Markets may be on hold before the big jobs report on Friday. The U.S. likely added 671,000 nonfarm payrolls in May, up from 266,000 jobs added in the previous month, according to economists polled by Dow Jones.

Inflation fears, and the ways in which the Federal Reserve might respond, have weighed on sentiment recently, although the major averages are still hovering around all-time highs.

But tomorrow awaits, and another potential swing of the psychological pendulum.

Is the inflation rate zero percent?

Before exposing the answer, we must realize that a rising price is not a synonym for inflation.

They have not. We can largely assign lumber’s grotesque pricing to lockdowns that throttled fresh production.

When twinned with exploding demand to feed a housing boom… the result is a bedlam of rising lumber prices.

Lumber prices should plummet once supply and demand fall back into general equilibrium.

Again: This is not inflation. It is a temporary bugaboo.

Consider an economy with a fixed supply of money. The Federal Reserve has been placed in handcuffs, the United States government thrown from the credit markets.

All goods and services must therefore bid against the existing money stock.

If certain prices increase, does this equal inflation?

It does not — if certain prices rise, others must fall. There is no general rising.

But let us return to our question…

Is the inflation rate zero percent?

“That is the correct answer,” you say — “zero percent. The identical widget that went for $10 last year goes for $10 this year. There is no inflation at all.”

Just so. But you have staggered into the trap.

Now come sit down with the facts…

The true inflation rate does not come in at zero percent.

The true inflation rate rather comes in at 12%.

That is because price increases are the consequence of inflation. They are not inflation itself.

To claim inflation is zero in this instance is to mistake the wagon for the draft horse, the shadow for the substance, the child for the parent.

Inflation, as this term was always used everywhere… means increasing the quantity of money and bank notes in circulation and the quantity of bank deposits subject to check. But people today use the term “inflation” to refer to the phenomenon that is an inevitable consequence of inflation, that is the tendency of all prices and wage rates to rise.

This all results in a “deplorable confusion:”

The result of this deplorable confusion is that there is no term left to signify the cause of this rise in prices and wages. There is no longer any word available to signify the phenomenon that has been, up to now, called inflation.

We hazard the monetary authorities delight in the terrible confusion… concealing their tricks behind a dense screen of smoke.

“Look at the consumer price index,” they shout. “We can’t even generate a sustained 2% inflation. How can anyone suggest there’s inflation?”

But tie yourself up to the traditional understanding of inflation.

What — then — is the true inflation rate?

The true inflation rate will flabbergast and reel you: Economist Frank Shostak:

A 69.2% inflation rate — if measured with a straight ruler — with an honest ruler.

Meantime, the federal government is spending delirious amounts of money. Thus it is absorbing precious resources from the private economy.

How then can the private economy build steam? Shostak:

Bubble activities cannot stand on their own feet; they require support from increases in money supply that divert to them real savings from wealth generators…

Once the pool of real savings starts to decline… because of massive monetary pumping and reckless fiscal policies — various bubble activities will plunge. This, in turn, is likely to result in a large decline in economic activity…

“Inflate or die,” as our co-founder Bill Bonner styles it.

The system requires constant expansion of credit — else the thing comes heaping down.

But the business cannot run on in perpetuity. All lunacies must end, all fevers must break.

Then comes the reckoning, the terrible reckoning — when accounts must be squared, when the bills come due, when the creditors thunder at the door.

“Inflate or die” ends ultimately in “inflate and die”…